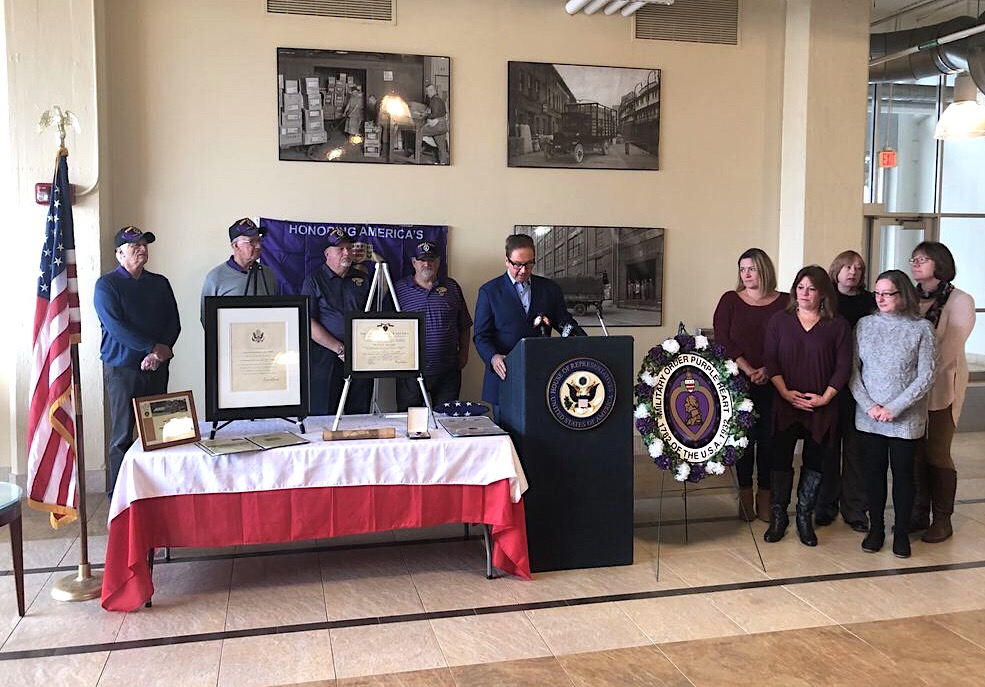 Several months ago, the U.S. Postal Service reached out to the office of Congressman Brian Higgins after discovering original Purple Heart documents from 1944. It sought to make sure the official documents were safely returned to the relatives of Corp. Henry Mazurkiewicz.

Higgins’ office was able to find basic information about Mazurkiewicz and started putting together a family tree. However, additional information was necessary to identify next-of-kin.

On Aug. 7, National Purple Heart Day, Higgins put out a public call for the community’s help in identifying the family of the late Mazurkiewicz. After seeing local media reports, several Western New Yorkers called Higgins’ office with information that led to family members being located and confirmed.

Higgins said, “This was a genuine community effort to honor Western New York hero Corp. Henry Mazurkiewicz. The Buffalo post office pursued the rightful home for the Purple Heart certificate, the media helped to spread the word, and a number of people – including those with interest and expertise in genealogy – came forward with information to help solve this World War II mystery. We are honored to play a part in placing these historic documents with the family – where they belong – and recognizing the great sacrifice one of Western New York’s own.”

“My heart is truly warm and I am very excited that this family will be united with something so special,” USPS Western NY District Manager Jean Lovejoy said. “Our postal family, including the numerous military veterans in our ranks, our proud that this very special delivery will make it home to its rightful owners, because of the unwavering commitment of so many to champion the effort.”

Mazurkiewicz was born in Buffalo in 1917 to Stephen Mazurkiewicz and Jennie Folaron. Stephen passed away in 1924 and Jennie later married Thomas Shultz. Henry had several siblings, including a brother, Theodore, who also served in World War II; a sister, Clara; and a half-sister, Dolores.

He enlisted in the U.S. Army in 1940 at the age of 23. Mazurkiewicz was a member of the 31st Infantry Regiment, also known as the “Polar Bears,” for the arctic bear on its insignia.

On the day following the attacks at Pearl Harbor, Japan began attacking U.S. military installations in the Philippines. The country pushed rapidly toward Manila, the capital of the Philippines, routing the Philippine Army units that had few heavy weapons and little training. The Americans and Allies stationed there at the time were effectively sitting ducks as these military assaults were unprovoked and unexpected. It was the responsibility of the 31st Infantry Regiment to cover the withdrawal of American and Philippine soldiers, acting as a rear guard while Americans and their allies retreated to the Bataan Peninsula to avoid the advancing Japanese forces. This peninsula is primarily a dense jungle environment. The combat that took place was often hand-to-hand and very personal.

Just weeks following the attack at Pearl Harbor, Mazurkiewicz sent a telegram to his mother on Dec. 24, 1941. It read, “Love and best wishes for Christmas and the New Year to all at home.” That was the last time his family heard from him.

Following the destruction of much of the American Pacific Fleet at Pearl Harbor, Guam and Wake Island, many Allied forces were stuck at Bataan. They were left with no option but to fend for themselves. Despite facing starvation, disease, few supplies, obsolete weapons, and often inoperative ammunition, the peninsula's defenders fought the Japanese to a standstill over a period of four months. This upset Japan's timetable for Asia's conquest.

With supplies dwindling and no reinforcements in sight, on April 9, 1942, at the orders of Gen. King, Mazurkiewicz, alongside roughly 1,600 other members of the 31st Infantry Regiment, and the rest of Allied Forces, surrendered to the Japanese as part of the Bataan Defense Force. Shortly after surrender, the Japanese forced over 60,000 captives to march 68 miles under torturous conditions – known as the Bataan Death March – to various prison locations, including Camp O’Donnell.

Mazurkiewicz, then deemed a prisoner of war, was among those who endured the brutality of the Death March in which prisoners were denied relief stops or water, and subjected to regular physical violence and outright torture by Japanese guards. These were war crimes as understood by international law and Allied military commissions. Those who survived were often sent to work in slave labor camps that were replete with severe physical ruthlessness by guards, including death. Survivors also greatly suffered from malnutrition and diseases, such as malaria.

As recorded in 1944, about 1,155 men died in captivity, including Mazurkiewicz, who died May 18, 1942. The death count surpassed the 31st Regiment’s number of casualties recorded during actual combat.

There was an article in the Buffalo Courier Express on Sunday, May 21, 1944, announcing Mazurkiewicz was missing in action. His mother received a letter dated May 5, 1947, from the War Department letting her know her son’s remains had been identified and interred in the U.S. Armed Forces Cemetery in Manila. The letter stated the cemetery was located within the city limits of Manila, Philippine Islands, and is under constant supervision of U.S. military personnel. The last line of the letter stated, “Please accept my sincere sympathy in your great loss.”

In recognition of his service and sacrifice, the U.S. Department of War, today known as the Department of Defense, awarded Mazurkiewicz with the Purple Heart. The certificate was initially addressed to his mother, Jennie Shultz, who was living in Buffalo in 1944.

Thanks to the Western New York media and community response to Higgins’ call for assistance, Mazurkiewicz’s family was located.

Higgins also reached out to the National Purple Heart Hall of Honor, which expedited a request to enter Mazurkiewicz into the Hall of Honor.

In addition to the Purple Heart Certificate and Medal, Higgins presented the family with a framed certificate from President Franklin D. Roosevelt from 1944 honoring Mazurkiewicz’s memory. It reads: “… He stands in the unbroken line of patriots who have dared to die so that freedom might live and grow and increase its blessings. Freedom lives, and through it, he lives — in a way that humbles the undertakings of most men.” (Signed) Franklin D. Roosevelt