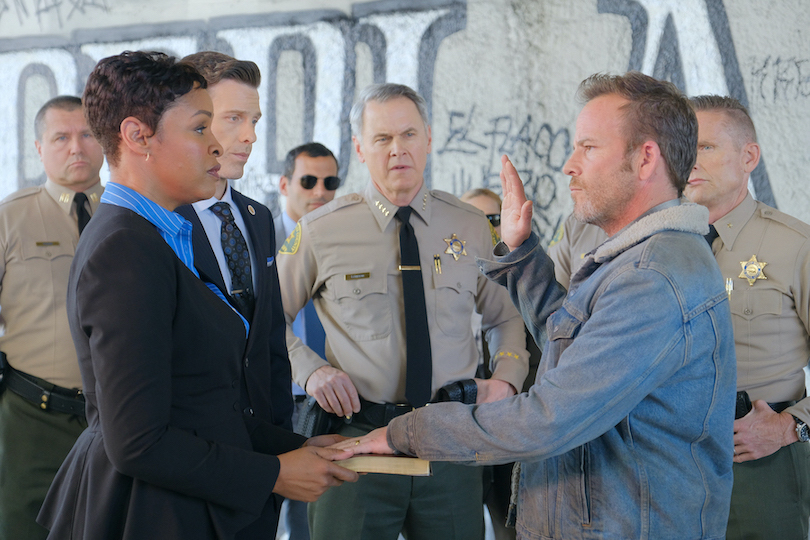 “Flirty Dancing,” an innovative new series that is part performance, part blind date, and all about romantic chemistry, previews Sunday, Dec. 29 (8 p.m. ET, but live to all time zones), following the “NFL on FOX” doubleheader. The series then makes its time period premiere Wednesday, Jan. 1 (8 p.m. ET/PT). In the show, hosted by actress, producer and dancer Jenna Dewan, complete strangers are taught a dance routine, then meet for the first time on a blind date at a breathtaking location, as they dance together without saying a word. Singles will perform a different choreographed dance with each of two potential love interests, before choosing the one with whom he/she has the strongest connection. Will it be love at first dance?

Season three of “Gordon Ramsay’s 24 Hours to Hell and Back” premieres Tuesday, Jan. 7 (9 p.m.). The hit restaurant makeover series features Ramsay as he drives across the country to help struggling restaurants in his state-of-the-art mobile kitchen and command center, “Hell On Wheels.” In today’s social media-driven world, everyone is an amateur food critic, and restaurants often find themselves one bad review away from shutting their doors. So, Ramsay tries to bring each of these failing restaurants back from the brink of disaster – all in just 24 hours. As the clock ticks down, Ramsay and his team of designers, decorators and chefs transform these restaurants overnight and ultimately unveil these dramatic changes in a public grand re-opening.

FOX’s No. 1 drama, “9-1-1,” expands its reach to the city of Austin, with its first new installment, “9-1-1: Lone Star,” which debuts with a special two-night event beginning Sunday, Jan. 19 (10-11:10 p.m., live to all time zones), following the NFC Championship Game, and continuing with its time period premiere on Monday, Jan. 20 (8 p.m.). Nearly 20 years ago, Owen Strand (Emmy Award nominee Rob Lowe, “Parks and Recreation,” “The West Wing”) was the lone survivor of his Manhattan firehouse on 9/11. In the wake of the attack, Owen had the unenviable task of rebuilding his station. After a similar tragedy happens to a firehouse in Austin, Owen, along with his troubled firefighter son, T.K. (Ronen Rubinstein), takes his progressive philosophies of life and firefighting down to Texas, where he helps them start anew. On the surface, Owen is all about big-city style and swagger, but underneath he struggles with a secret he hides from the world – one that could very well end his life. The series also stars Liv Tyler (“The Leftovers,” “Lord of the Rings” trilogy), Sierra McClain, Jim Parrack, Natacha Karam, Brian Michael Smith, newcomer Rafael Silva and Julian Works.

TV’s No. 1 entertainment program, “The Masked Singer,” returns for its third season on Sunday, Feb. 2 (10:30-11:40 p.m., live to all time zones), following Super Bowl LIV. The series then makes its time period premiere Wednesday, Feb. 5 (8 p.m.). The singing competition series features celebrities facing off against one another with one major twist: each singer is shrouded from head to toe in an elaborate costume, complete with full face mask to conceal his or her identity. With each performance, the host, panelists, audience, viewers and even the other contestants are left guessing who is singing behind the mask. Ranging from Grammy Award-winners to legendary athletes, and everything in between, the singers may attempt to throw the crowd off of their scent, while keen observers might pick up on tiny clues buried throughout the show. One singer will be eliminated each week, ultimately revealing his or her true identity.

Following “The Masked Singer’s” time period premiere on Wednesday, Feb. 5, is new competition series “LEGO Masters” (9 p.m.). Based on the hit British reality-competition series of the same name, “LEGO Masters” brings imagination, design and creativity to life when teams of LEGO enthusiasts go head-to-head, with infinite possibilities and an unlimited supply of LEGO bricks. Teams of two will compete against each other in ambitious brick-building challenges to be crowned the country’s most talented amateur LEGO builders. In each episode, the competing pairs who most impress the judges will progress to the next round, until the finale, during which the top teams will face off for a cash prize, the ultimate LEGO trophy and the grand title of “LEGO Masters.”

The CW Network has given full season orders to both of its new fall series, “Batwoman” and “Nancy Drew,” bringing their first season totals to 22 episodes each, it was announced by President Mark Pedowitz.

With The CW securing full in-season streaming rights to all new series starting this season, every episode of “Batwoman” and “Nancy Drew” will exclusively stream on The CW’s digital platforms the day after broadcast throughout the season, so viewers can catch up at any point during the season on CWTV.com and The CW app – for free, without authentication, subscription or log-in required.

Airing Sundays (8 p.m.), “Batwoman” is set three years after the mysterious disappearance of Batman, and Gotham is a city in despair. Without the Caped Crusader, the Gotham City Police Department was overrun and outgunned by criminal gangs. Armed with a passion for social justice and a flair for speaking her mind, Kate Kate (star Ruby Rose) will have to become what her father loathes, a dark knight vigilante, soaring through the streets of Gotham as Batwoman.

Airing Wednesdays (9 p.m.), “Nancy Drew” (star Kennedy McMann) is a brilliant teenage detective whose sense of self had come from solving mysteries in her hometown of Horseshoe Bay, Maine – until her mother’s untimely death derails Nancy’s college plans. Devastated by her mother’s passing, Nancy swears off crime-solving while crossing off the days until she can re-apply to college. But when a socialite is murdered, Nancy finds herself a prime suspect in the crime, along with a group of other teens present at the scene.

The CBS Television Network has rewarded all five series from its top-rated freshman class with new production orders.

The critically acclaimed new drama “Evil” has been renewed for a second season in 2020-21. It will conclude its 13-episode first season on Jan. 30, 2020. At the same time, the network has given full-season orders to its No. 1 new series, “All Rise,” and the top three freshman comedies: “Carol’s Second Act,” “The Unicorn” and “BOB ♥’s Abishola.”

“All Rise” stars Simone Missick in a courthouse drama that follows the chaotic, hopeful and sometimes absurd lives of its judges, prosecutors and public defenders, as they work with bailiffs, clerks and cops to get justice for the people of Los Angeles amidst a flawed legal process. Among them is newly appointed Judge Lola Carmichael (Missick), a highly regarded and impressive deputy district attorney who doesn’t intend to sit back on the bench in her new role, but instead leans in, immediately pushing the boundaries and challenging the expectations of what a judge can be. The series also stars Wilson Bethel, Marg Helgenberger, Jessica Camacho, J. Alex Brinson, Lindsay Mendez and Ruthie Ann Miles. It airs Mondays (9 p.m.) on CBS.

“BOB ♥’s Abishola” is a love story about a middle-aged compression-sock businessman from Detroit who unexpectedly falls for his cardiac nurse, a Nigerian immigrant, while recovering from a heart attack. He soon sets his sights on winning her over. Undaunted by Abishola’s lack of initial interest or the vast differences in their backgrounds, Bob is determined to win Abishola’s heart, in this comedic examination of immigrant life in America. The series stars Billy Gardell, Folake Olowofoyeku, Christine Ebersole, Matt Jones, Maribeth Monroe, Vernee Watson, Shola Adewusi, Barry Shabaka Henley, Travis Wolfe Jr. and Gina Yashere, who is also a co-creator, writer and producer. Chuck Lorre is among the executive producers. The show airs Mondays (8:30 p.m.).

“Carol’s Second Act” stars Emmy Award-winner Patricia Heaton as a woman who embarks on a unique second act after raising her children, getting divorced and retiring from teaching: pursuing her dream of becoming a doctor. At age 50, Carol is a medical intern and must sink or swim with peers who are half her age. It’s her enthusiasm, perspective and, yes, even her age that may be exactly what will make her second act a great success. The series also stars Kyle MacLachlan, Ashley Tisdale, Ito Aghayere, Jean-Luc Bilodeau, Sabrina Jalees and Lucas Neff. It airs Thursdays (9:30 p.m.) on the CBS Television Network.

“Evil” is a psychological mystery that examines the origins of evil along the dividing line between science and religion. The series focuses on a skeptical female psychologist who joins a priest-in-training and a contractor as they investigate the church’s backlog of unexplained mysteries, including supposed miracles, demonic possessions and hauntings. Their job is to assess if there is a logical explanation or if something truly supernatural is at work. The series stars Katja Herbers, Mike Colter, Aasif Mandvi, Michael Emerson, Christine Lahti, Kurt Fuller, Brooklyn Shuck, Skylar Gray, Maddy Crocco and Dalya Knapp. The show airs Thursdays (10 p.m.).

“The Unicorn” is about a tight-knit group of best friends and family who help Wade (Walton Goggins) embrace his “new normal” in the wake of the loss of his wife one year ago. As a sometimes ill-equipped but always devoted single parent to his two adolescent daughters, he is taking the major step of dating again. To Wade’s amazement, he’s a hot commodity with women, and his friends explain that he’s the perfect single guy – a “unicorn”: employed, attractive, and with a proven track record of commitment. With his daughters and best friends rooting him on, and hoping he’ll find happiness again, Wade and his healing heart are ready to try life … and love … a second time. The series also stars Rob Corddry, Michaela Watkins, Omar Miller, Maya Lynne Robinson, Ruby Jay, Makenzie Moss and Devin Bright. It airs Thursdays (8:30 p.m.).