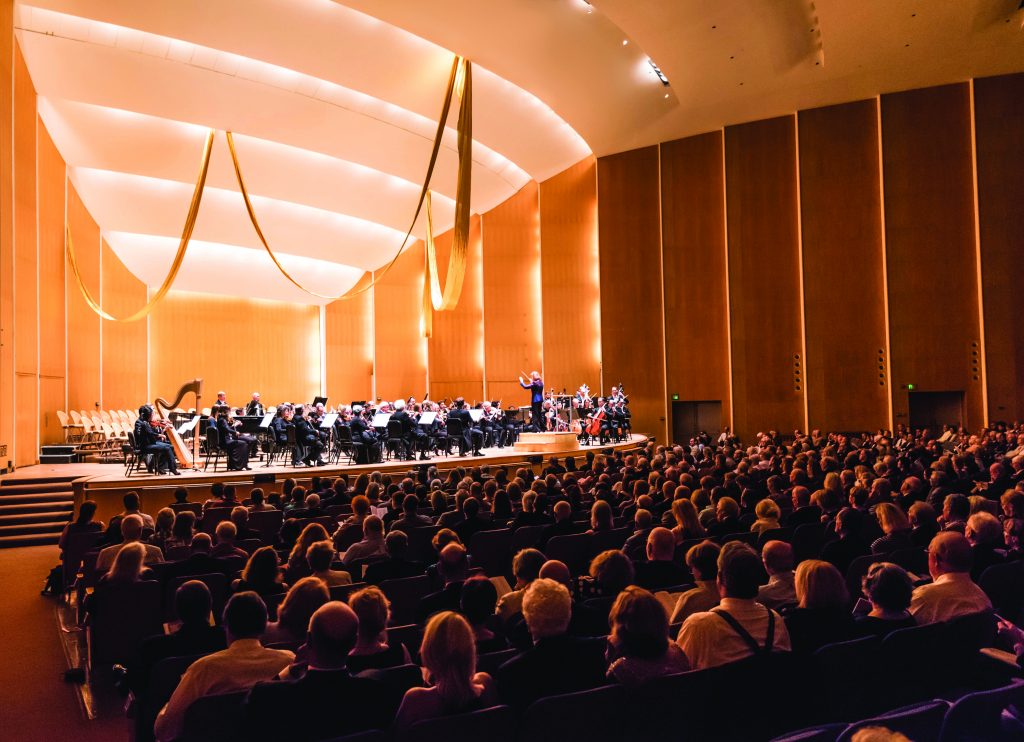 JoAnne Falletta leads the BPO in this photo by Matt Digati.

On Saturday, John Yurtchuk, chair of the board of trustees of the Buffalo Philharmonic Orchestra Society Inc., announced a five-year extension of Maestro JoAnn Falletta’s contract with the BPO, which was set to expire at the conclusion of the 2021-22 season. The new contract will ensure her legacy of bringing live symphonic music to the Western New York Region through the 2025-26 season.

In making the announcement, Yurtchuk said, “This is a great day for the BPO and our community. The orchestra’s trajectory has been on an upward swing thanks to JoAnn, and we are very happy to make this announcement as we celebrate her 20-year tenure this weekend.”

Falletta has served as music director of the BPO since 1999, when she became the first female conductor to lead a major American ensemble. Celebrating her 20th anniversary with the BPO this season, she has been credited with bringing the BPO to an unprecedented level of national and international prominence. During her tenure, the orchestra’s budget has grown by 25% with a balanced budget for 14 years, subscriptions have reached record levels, the orchestra has toured extensively both nationally and internationally, and has become one of the most recorded orchestras in America.

“It takes extraordinary talent to create a legacy like the one that JoAnn has for the Buffalo Philharmonic Orchestra over her 20-year tenure as maestro,” said Steve Swift, immediate past board chair who oversaw the negotiation, along with Executive Director Daniel Hart and the BPO executive committee. “Her visionary leadership has set the standard for conducting excellence and her commitment to engaging audiences around the globe is unprecedented. We're fortunate for JoAnn’s dedication and eager to watch her lead the orchestra into the future.”

“I believe a great city like Buffalo deserves a great orchestra,” Falletta said. “There is such a special bond that we all share, from the musicians who touch our audiences with their world-class artistry week after week, and the audiences who allow us to share our music with them. It is truly my honor to lead this remarkable ensemble, and I am thrilled to be able to do so for several more years.”

On Friday, Oct. 18, the Buffalo Philharmonic led a special daylong celebration in honor of Falletta’s 20 years on the podium. At a morning coffee concert performance of Danny Elfman’s Violin Concerto, led by Falletta, Mayor Byron Brown and Deputy Erie County Executive Maria Whyte made independent proclamations that Oct. 18 shall henceforth be known as JoAnn Falletta Day throughout the Western New York region in recognition of Falletta and the BPO’s remarkable accomplishments over the past two decades.

The daylong celebration also included collaborations with cultural and community partners, including the Burchfield Penney, Buffalo and Erie County Botanical Gardens, Buffalo Museum of Science, Darwin Martin House, Albright-Knox Art Gallery, Buffalo Zoo, Buffalo History Museum, Explore and More Children’s Museum, and WNED | WBFO, all of which celebrated Falletta and the BPO in a variety of ways, including onsite tribute displays, discounted admission, and the sharing of BPO recordings.

The day concluded with a black-tie 20th anniversary affair held at Hotel Henry on the Richardson Olmsted Campus, chosen both as a venue devoted to the arts and a landmark property symbolic of the transformation of the City of Buffalo over the past 20 years. The event was presented through the support of honorary co-chairs Jim and Michal Wadsworth and John R. and Carolyn Yurtchuk; steering committee co-chairs Cindy Abbott Letro and Peter Eliopoulos; and commemorative sponsors Scott R. and Rachel Stenclik. The evening included an exclusive display produced by Hadley Exhibits celebrating Falletta’s past 20 years in Buffalo with the BPO, a video piece produced by WNED | WBFO, and speakers who paid tribute to Falletta throughout the evening. After dinner, guests were treated to a surprise musical performance by Falletta, along with musical guests Michael Andriaccio, Joanne Castellani, Nikki Chooi, Daniel Hart, and Falletta’s husband, Robert Alemany.

Falletta is internationally celebrated as a vibrant ambassador for music, an inspiring artistic leader, and a champion of American symphonic music. Upon her appointment as music director of the Buffalo Philharmonic, Falletta became the first woman to lead a major American ensemble. She has since been credited with bringing the BPO to a new level of national and international prominence.

The orchestra has become one of the leading recording orchestras for Naxos and returned twice to Carnegie Hall in 2004 and again in 2013. In 2018, the BPO made its first international tour in three decades, to perform at Warsaw’s prestigious Beethoven Easter Festival, where Falletta made history as the first American woman to conduct an orchestra at the festival.

She and the BPO have been honored with numerous ASCAP awards, including the top award for Adventurous Programming. Other accomplishments include the establishment of the orchestra’s Beau Fleuve label, the founding of the JoAnn Falletta International Guitar Concerto Competition in partnership with WNED, and the national and international broadcast of concerts on NPR’s “Performance Today,” “SymphonyCast,” and the European Broadcasting Union. With a discography of 112 titles, Falletta is a leading recording artist for Naxos. Her discs have won three Grammy Awards and received 11 nominations.

About The Buffalo Philharmonic Orchestra

The Buffalo Philharmonic Orchestra Society Inc. provides a resident, professional, major symphony orchestra of artistic excellence and integrity to enrich the quality of life in Western New York through the presentation of live symphonic music and other musical events, which educate and entertain the broadest possible audiences within and beyond the Western New York region. Since 1940, the orchestra’s permanent home has been Kleinhans Music Hall, a National Historic Landmark designed by Eliel and Eero Saarinen with an international reputation as one of the finest concert halls in the U.S. Since its inception in 1935, the BPO has served as Buffalo’s cultural ambassador. The Grammy-winning orchestra presents more than 120 classics, pops, rock, kids and youth concerts each year. For more information, visit bpo.org.