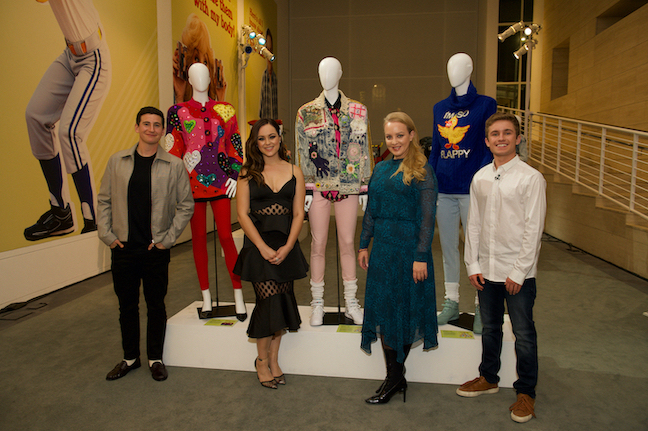 "The Goldbergs & Schooled Rewind!" - Cast and executive producers of "The Goldbergs" participated in a special preview screening and Q&A panel discussion on Tuesday at Paley Center for Media to talk about the 1980s and 1990s fashion of two of ABC's hit flashback comedies. The event launched an exclusive new costume exhibit at the center's Beverly Hills location, which runs from to Nov. 17. From left: Sam Lerner, Hayley Orrantia, Wendi McLendon-Covey and Sean Giambrone. (ABC photo by Frank Micelotta)

Installation on display through Nov. 17

The Paley Center for Media in Beverly Hills takes visitors back in time for its exclusive new exhibit celebrating the fashion from two of ABC’s hit flashback comedies. “The Goldbergs & Schooled Rewind!” immerses visitors into all the nostalgic fun of two acclaimed series, set in two of the most fashion-driven eras in pop-culture history.

To launch the exhibit, cast and executive producers of “The Goldbergs” participated in a special preview screening of the “Animal House” episode and a Q&A panel discussion on Tuesday to talk about the series and the fashion of both shows, celebrating each show’s signature style. From Beverly Goldberg’s iconic sweaters to budding filmmaker Adam Goldberg’s inventive costume creations for episodes celebrating “Predator,” “Tron” and “Transformers,” “The Goldbergs,” which is currently in its seventh season, is a virtual ’80s pop-culture blast.

“Schooled’s” ’90s looks underscore Lainey Lewis’ new life as a music teacher at William Penn Academy, where she attended high school during her character’s run on “The Goldbergs.”

Running to Nov. 17, the exclusive, free exhibit features the work of costume designer Keri Smith, whose previous credits include “Live in Front of a Studio Audience: Norman Lear’s ‘All in the Family’ and ‘The Jeffersons’” and “Happy Endings,” along with video clips and photography highlighting each show.

Created by Goldberg and Marc Firek, the series is from Sony Pictures Television and ABC Studios.