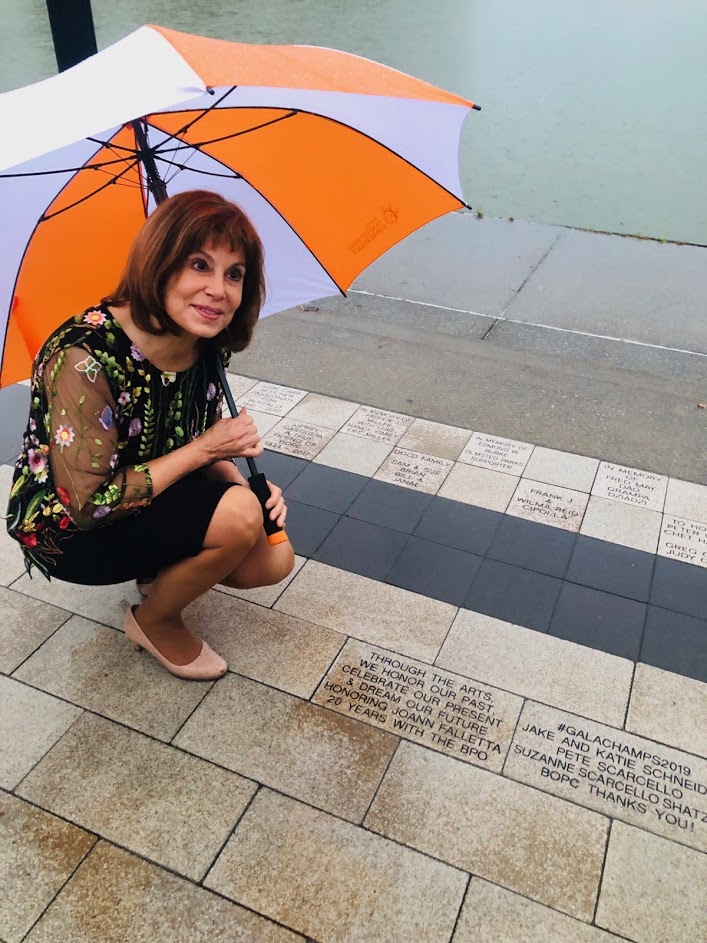 Earlier this week, the Buffalo Olmsted Parks Conservancy, joined by the Siegel family, unveiled and presented a commemorative paver to JoAnn Falletta in honor of her 20th anniversary with the Buffalo Philharmonic Orchestra.

Siegel Landing, which officially opened in June of 2018 at Hoyt Lake in Delaware Park, is a renovated hardscape project conceived by Herb Siegel, a well-respected local attorney, philanthropist and founder of the Herb and Aaron Siegel Foundation.

“We are honored to celebrate Ms. Falletta on 20 years with the BPO and her continued support in the Buffalo community,” said Aaron Siegel, Herb & Aaron Siegel Foundation. “We are grateful that Ms. Falletta was able join us for the unveiling. This landing is a special place where Buffalonians come to celebrate special times in their lives and pay tribute to loved ones, friends and family. On behalf of my family and my fellow Buffalo Olmsted Parks Conservancy board members, we thank you.”

A press release said, “The restorative landscape at Hoyt Lake is a testament of the philanthropic legacy of Herb Siegel, which includes an endowment toward ongoing maintenance. The Siegel’s gift demonstrates the exact type of fundraising support the conservancy needs to sustain park projects.”

“I am incredibly honored to be recognized by the Olmsted Parks Conservancy, the Siegel family, and our patrons in such a touching way,” Falletta said. “I have been proud to call the City of Buffalo my home for the past two decades. One of the many things I love about this great city is its breathtaking parks system, which inspires me every day. A great city deserves a great orchestra, and it has been my privilege to conduct one of the best orchestras in the world these past 20 years. I look forward to making music together for years to come.”

The significance of the Siegel Landing marks the historic bandstand and boat launch site for Gala Water, making the restoration of the Siegel Landing a positive step in preserving Buffalo’s Olmsted Parks legacy. Located at the western shore of Hoyt Lake, pavers are available for purchase and personal inscription, with installations each spring and fall.

“Within this special space we are fortunate to commemorate amazing people and the legacies which shape the greatness of Buffalo,” said Stephanie Crockatt, executive director, Buffalo Olmsted Parks Conservancy. “Many at Siegel Landing have been honored here, and today we celebrate JoAnn Falletta among others. It is in these moments of history and acknowledgement when our collective future looks the brightest, as generations from now will benefit from these outstanding contributions memorialized in this distinctive landscape.”

Full details on The Siegel Landing can be found at www.bfloparks.org/buyapaver.