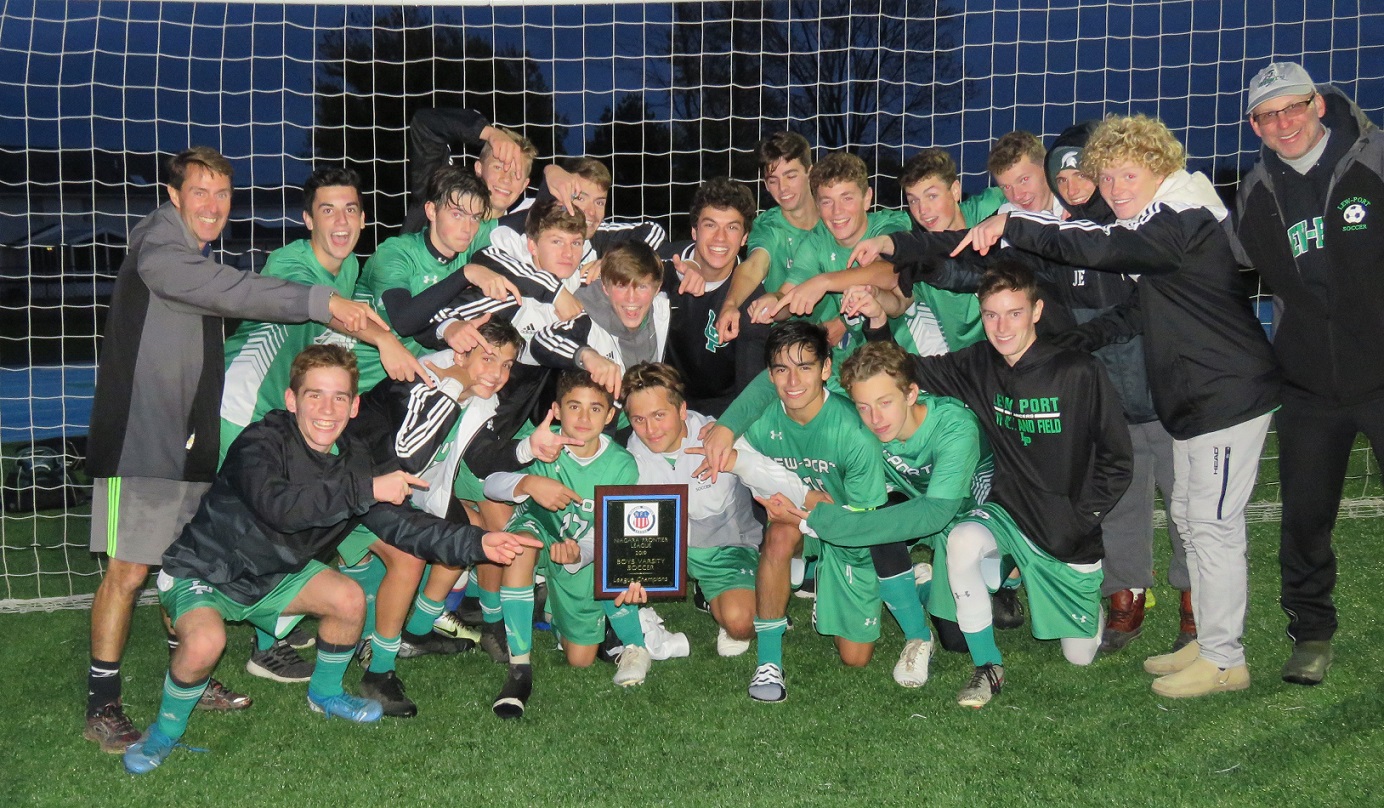 The Lewiston-Porter Lancers throw up the No. 1 after they defeated Niagara-Wheatfield to win the Niagara Frontier League title. (Photos by David Yarger)

After losing to the Niagara-Wheatfield Falcons early in the season, 5-0, the Lewiston-Porter Lancers boys soccer team chances of winning the Niagara Frontier League finals Wednesday night may have seemed slim to some.

The Lancers were quick to prove the doubters wrong, though, as Lewiston-Porter defeated the Falcons, 1-0, to clinch the program’s first NFL title since 2010.

The win was an impressive resume booster for the Lancers, as the Falcons came into the game as the No. 2 ranked team in Class A of New York state.

The Falcons possessed the ball for the majority of the first half, but found themselves trailing after 40 minutes.

The first goal came off a defensive miscue from Wheatfield. As the ball was misplayed, the Lancers’ Joey Zachary swooped in and dribbled the ball in on net, eventually kicking it past the stretch of goalkeeper Josh Morelli with 27 minutes left in the half.

Zachary’s 21st goal of the season gave Lewiston-Porter a 1-0 lead, one that would stand for the rest of the game.

Wheatfield had plenty of chances to convert, but quality Lancers defense and saves by keeper Joe Beatty kept the Falcons off the scoreboard.

In the second half, the Falcons continued their pursuit to get on the board.

Just around 10 minutes into the final 40 minutes, a corner kick from N-W’s Ralph Wence sailed into the crease, was headed and misplayed by Beatty. Luckily for Beatty, Zachary was behind him to head the ball away before the Falcons' Joe Woroniecki was able to convert on the error.

Wheatfield had five corner kick opportunities in the second half and could not convert on one.

Wence sent the corner deep into the crease and the ball was fumbled around. As the skirmish of players continued, the referee’s whistle blew just before the ball went into the net. The goal would’ve tied the game and shifted momentum towards the Falcons. It was all for not, though, and the Lancers were able to play out the final three minutes and win the NFL title.

Of the first NFL title since 2010, Lancers coach Rick Sweeney said, “It’s a great feeling. I’m really happy for the kids that have worked hard this year and many years leading up to this one. It’s a good bunch of kids that we’ve had that have really emotionally invested into what we’ve been doing. They’ve laid out the sweat equity since mid-August and I’m very happy that they’ve gotten to this point with what they’ve done. And it’s a team that’s capable of big wins on a big stage and they proved that tonight.”

The keeper Beatty added, “It’s awesome, I can’t even describe how I feel right now. I love these guys. Everyone coming into this game thought we didn’t have a shot, and I’m just so happy right now.”

Zachary, the scorer of the eventual game winner, said, “We started off the season 0-3 and to come back how we are now … we really showed out and finally got it this year.”

It’s a tough pill to swallow for Niagara-Wheatfield coach John Coulter, as the Falcons were in the same NFL title game last season and, again, fell to defeat.

“I feel like, I don’t know if it stings anymore (than last year),” Coulter said. “I’m just proud of the way my boys came out and played today. Lew-Port came out and did what they had to do. They scored a quick goal on us and that was the difference tonight.”

Coulter said the first time the Falcons played the Lancers the team was able to convert their opportunities, and Wednesday the team just couldn’t find the back of the net.

In addition, Coulter was visibly frustrated about the referee’s call to blow the whistle late during the scrum in front of the net, which essentially kept the Falcons from tying up the game. He offered explanation from what he was told on the sideline.

Although, Zachary’s goal won the game, the biggest play of the game came in the second half from the senior by saving the ball that went through Beatty’s fingertips.

Of the play, Sweeney said, “If you would’ve told me Joey would’ve made a play like literally on our own goal line that was a difference making moment, before going, I would’ve had a hard time buying into that storyline. … He came out of nowhere and got it, and it was such an unexpected play that had to be made, because it was a pretty routine shot that squirted through Joe’s hands and Joey just launched upward out of nowhere and got not only a piece of it, but good clearance going back towards the net. … That was as big a moment when he came down on the ball in the later minutes, as well as the goal. There’s always a lot of little things that shape the outcome that don’t get noticed. But those little intricate moments that kind of get overlooked, that certainly wasn’t one of them.”

Beatty was thankful that Zachary was there to guard his backside.

“I just took my eye off of it,” Beatty said. “I thought it was routine. I’m lucky to have this kid on my team to save my butt.”

Regarding the play, Zachary said, “I usually line up on the back post for corner kicks. Joe usually gets them all or punches them out or something. That one it kind of slipped through and it was almost like I was ready for it. I saw it and just kind of pounced towards it and headed it right out.”

For both teams, the game was the last before the Section VI playoffs.

Coulter said he told his team to take the loss and use it as energy to want to do better and win come playoff times.

As for Sweeney, Beatty and Zachary, the three agreed that a win over the No. 2 team in the state is a huge confidence booster and that the team can play with anyone they face. Beatty added, the win is big following a “demoralizing” league loss versus Grand Island just six days prior.

“We know we can play with some of the best teams in Western New York. But when you win one like this, you come back with a little more bounce in your step,” Sweeney said. “As the season wears on, you want kids to be excited to show up. I think when you lose that, you lose something that’s critical to being successful.”

For the Lancers, the win increases their record to 10-4-1. For the Falcons, it was the team’s first loss and their record stands at 13-1-1. Each teams’ next matchup is to be determined in the coming days. 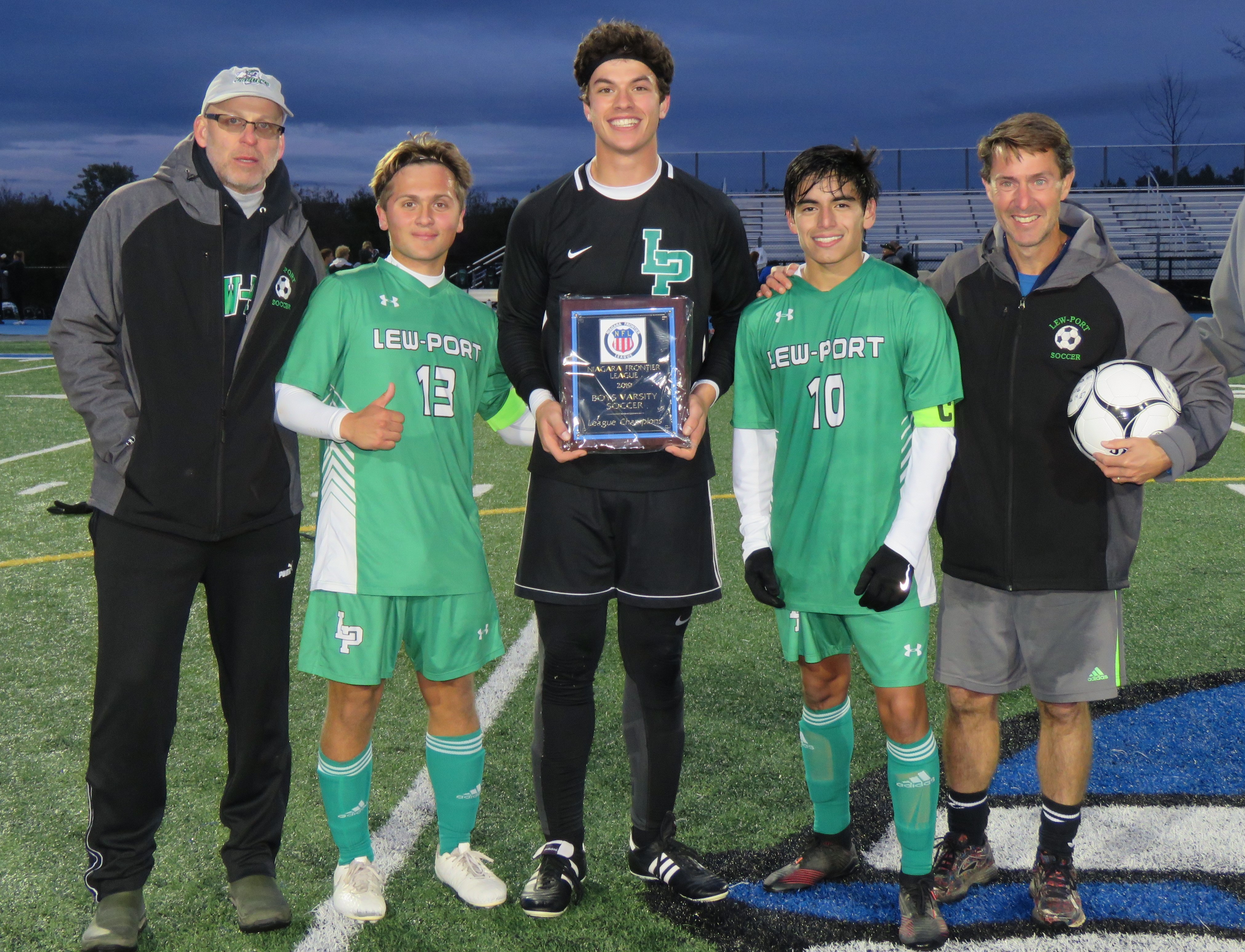 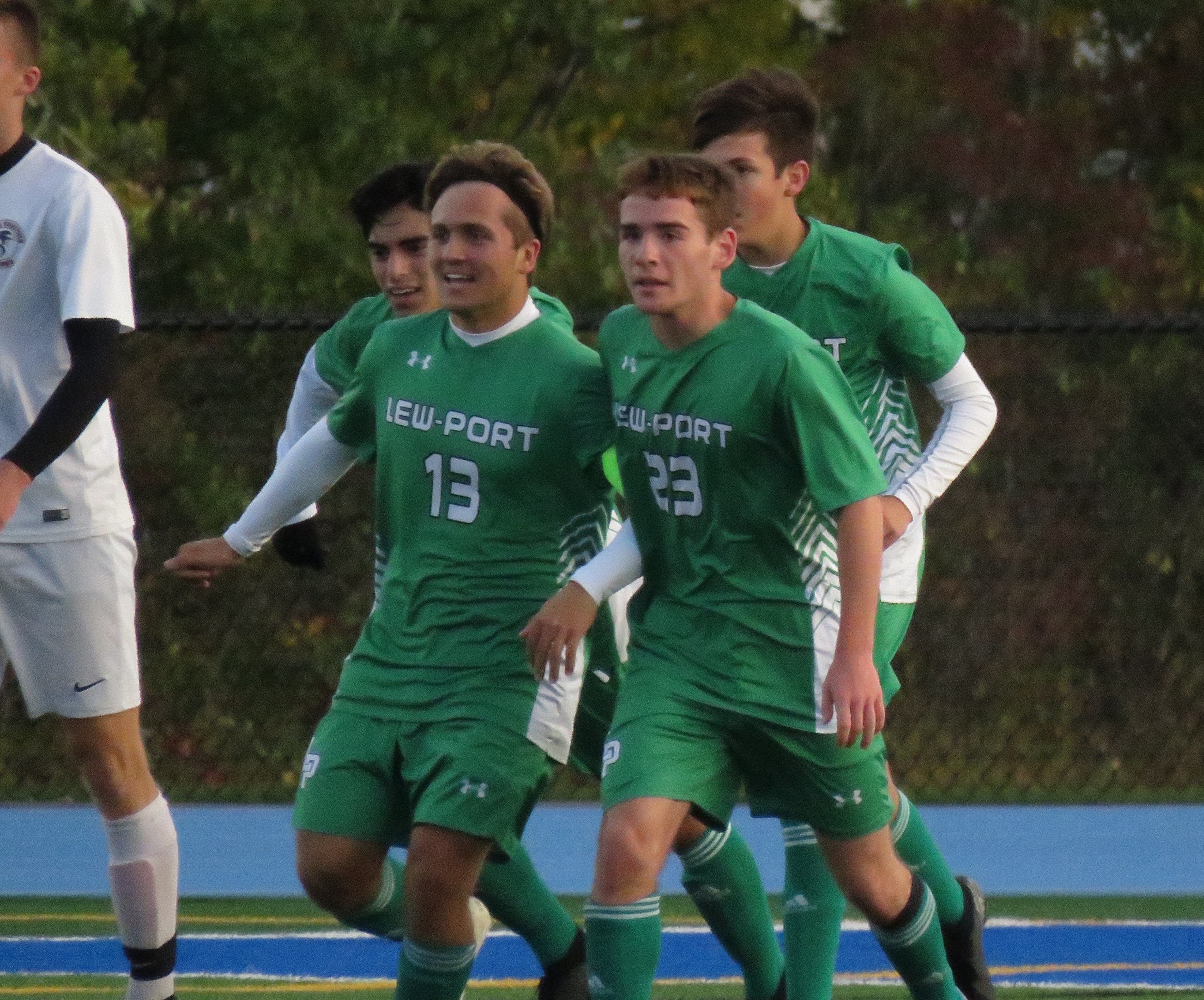 From left, Joey Zachary celebrates his goal with Robert Woods.