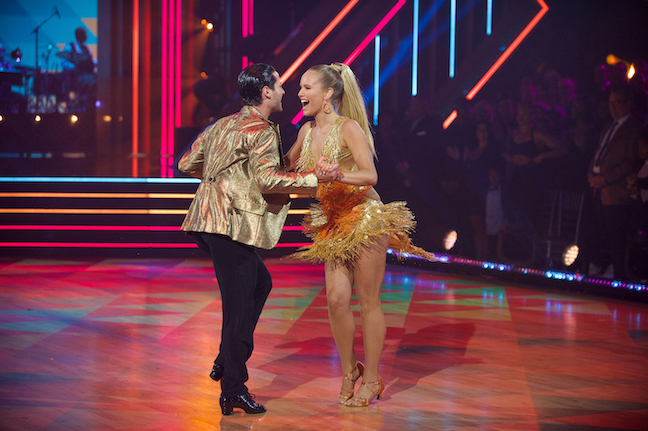 Val Chmerkovskiy and Sailor Brinkley-Cook on "Dancing with the Stars." (ABC photo by Eric McCandless)

'Disney Night' on 'Dancing with the Stars'

For first time, Sleeping Beauty Castle will be featured in show’s opening number; couple packages will be shot on location throughout Disneyland Resort in California

The remaining 10 celebrity and pro-dancer couples competed Monday on the fourth week of ABC’s “Dancing with the Stars.” Season 17 alumnus Leah Remini joined in as the season’s first guest judge.

From the foxtrot to the paso, the dances featured a variety of well-known songs, including Dolly Parton’s “Jolene,” Tina Turner’s “Proud Mary,” and Shawn Mendes’ “If I Can’t Have You.” Then, the night ended with the third elimination of the season, sending Lamar Odom and Peta Murgatroyd home.

There will be Disney magic in the ballroom as nine celebrity and pro-dancer couples compete on the fifth week of the 2019 season of “Dancing with the Stars,” live, Monday, Oct. 14 (8 p.m. EDT), on ABC. (TV-PG, L) Episodes can also be viewed the next day on ABC.com, the ABC app and Hulu.

For the first time in the show’s history, the opening dance number will take place at the Disneyland Resort in Anaheim, California, in a pre-recorded segment and will feature the cast on Main Street, U.S.A., and in front of Sleeping Beauty Castle, choreographed by the acclaimed Zach Woodlee (“Grease Live” and “Glee”). During the show, the celebrity contestants and their pros take over the “Happiest Place on Earth,” as they seek inspiration for their dance numbers at Disney California Adventure Park and Disneyland Park in Anaheim, California. One lucky “Dancing with the Stars” couple will even get to travel to “Star Wars: Galaxy’s Edge” and take the controls of the Millennium Falcon.

Vying for America’s vote, each couple will dance to a variety of beloved Disney songs, including “We’re All in This Together” from “High School Musical,” “Under the Sea” from “The Little Mermaid,” “A Spoonful of Sugar” from “Mary Poppins,” “Beauty and the Beast” from the live-action “Beauty and the Beast,” and “I Just Can’t Wait to Be King” from the live-action “The Lion King,” among others.

In addition, a special dance inspired by new song “Into the Unknown” from “Disney’s Frozen II” will be featured. And special looks from Disney+’s upcoming “High School Musical: The Musical: The Series” and live-action “Lady and the Tramp” will be shown.

Each Monday night, the live vote (via abc.com, the ABC app and SMS/text) will be combined with the judges’ scores and tabulated in real time. The live votes will occur each week only during the live broadcast in the EDT/CDT time zones (but fans in all U.S. time zones may vote within that window).

The couples are (with their dance choice) the following:

Hosted by two-time Emmy Award-winning host Tom Bergeron and Erin Andrews, “Dancing with the Stars” is the hit series in which celebrities perform choreographed dance routines that are judged by a panel of renowned ballroom experts, including head judge Len Goodman, and dancers/choreographers Bruno Tonioli and Carrie Ann Inaba.