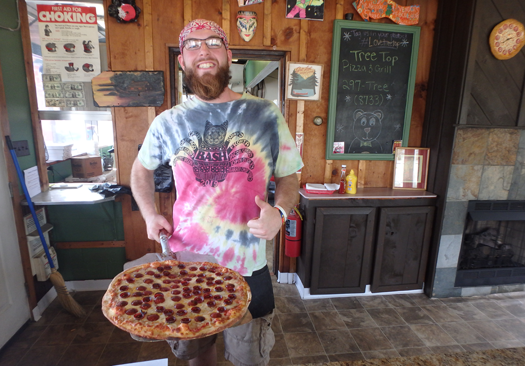 Tree Top Pizza & Grill is back at 4900 Saunders Settlement Road to the delight of its customers. Nathan Addenbrooke, the son of the original owners, has taken the helm of the business and will be serving the classic, not deep-dish, not thin-crust, but completely authentic “pizza pie” that his fans have learned to crave.

Tree Top Pizza, named for the log beams holding up its ceiling, was on hiatus since April 2018. At that time, the family made a decision to sell Tree Top to another pizzeria called Romana’s Pizza. Over time, Addenbrooke decided he did want to run a restaurant and it was just coincidence that Romana’s Pizza decided to close down at the same time. Addenbrooke said he was happy that things worked out so he could return to the space.

“We were here for seven years,” Addenbrooke said. “And then we decided to sell this because I wanted to do some other stuff. I worked here since I was 15, so, I wanted to see what other stuff I could get into.”

Addenbrooke is 25 years old and described himself as a sort of “jack of all trades.” Other than food, a few things take his fancy, one of them being music. To Addenbrooke, the idea of entertaining people, of providing hospitality, is the root of all his interests and that brought him back to Tree Top.

“I’ve been doing a little bit of everything here and there,” he said. “In the last three years, I just tried to do everything to see what I wanted to do and to set myself up for the rest of my life, hopefully. I just came back to running a restaurant.”

And are people glad he did. Online at Town of Niagara Brats, NY, USA, a Facebook discussion group, happy customers crowed over the menu: the pizza, the salads, the wings and the Friday fish fry. To Addenbrooke, it’s all about giving the customer what they want.

“We top the pizza with a little oregano, just to give it some good taste, we put some oregano in the sauce, too,” Addenbrooke said. “I never really liked the sweet sauce too much, but we’ll make a sweet sauce for you, no problem. … It’s not like we’re just throwing toppings on pizza and shoving them in the oven and mass-producing it. … We got pretty good guidelines, but if I got it, I can make it, no problem.”

“The overwhelming support I’ve had from all my customers is amazing,” he said. “I couldn’t be more blessed with the amount of people who have come out to show their support.”

Addenbrooke said coming back to Tree Top was like coming home. He heard the space was coming back onto the market and gravitated toward the familiar.

“The kitchen is pretty much laid out the same way,” he said, but admitted that it wasn’t the way he left it. “They changed it from what we had before and I’m slowly trying to work back to what I had before, because I had a good system. They rearranged everything and it was kind of hard to do a good volume of business in the kitchen the way they had it set up. So, I’m slowly just going, changing it up here and there, because I basically have to come in and start from scratch.”

“I’m doing all the favorites from before,” he continued. “And then adding some things, like a personal twist on (what we had). It’s just quality food; we don’t cut corners.”

When the subject of social media and the internet came up, Addenbrooke had some words to say. He said besides the training he received right at Tree Top and other restaurants, his own personal study on how to cook came from the internet, which is where, he said, “If you can’t figure something out, you can just look it up. There are databases out there for you.”

As for social media, he said that a lot of people found the restaurant through it.

“We’re finding a lot of success with social media, which is huge,” Addenbrooke said. “We used to pay for a website, but nobody ever went to the website. So, there’s no reason to pay for a website that you don’t use. I have friends who are like, ‘You own Tree Top? I never even knew, I found Tree Top from Facebook,’ and I’m like, ‘Yeah, that’s us!’ and they knew about it before they even know what I did, which is pretty awesome.”

“We’re kind of a different animal, just because I got to jump right into the market we once had, and our customers are really loyal,” he said. “They know they’ll get good food and good service. Then, I push followers on Facebook because I go on there and I post our specials daily. I let people know what’s going on and I just keep them updated on what’s new.”

Addenbrooke was a little tired by the time the Tribune got to talking to him. He said he’s been working since Friday, open to close, with his mother and sister helping out, as well as a few friends.

“I don’t want to grow too fast,” he said, referring to the success the pizzeria has received. “Manageable growth is what I’m looking for.”

“All the stuff is homemade,” he said. “We grind the meat ourselves and we make our own Italian sausage; we slice our own sirloin for the steak and cheese. Everything is made from scratch and there’s no frozen, processed stuff. That’s another secret to success.”

And once last word: the “sweet fire” sauce is “kind of a staple” and has won an award.

“There’s a collection of pizzerias in the area, about six or seven,” Addenbrooke said. “It was the Purple Wings Awards, so we got a little purple chicken wing on a trophy. That was my last year in business (so I thought) and it was pretty awesome.”