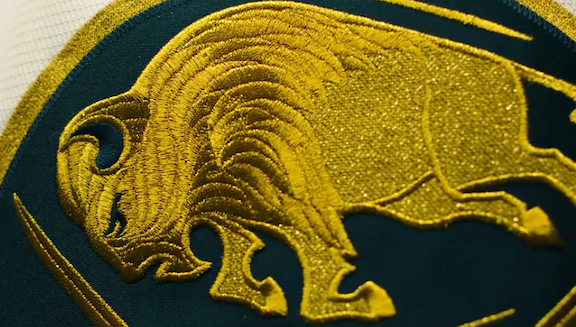 The Buffalo Sabres New Era Store is now open at KeyBank Center, and beginning today fans will be able to purchase the Sabres 50th Season Commemorative Jersey. The newly renovated store is open weekdays from 10 a.m. to 5 p.m. and on Sabres and Bandits game nights.

“The Buffalo Sabres New Era Store now contains a greater collection of merchandise that celebrates all five decades of Sabres hockey,” said Dan Misko, PSE’s senior vice president of business development. “New Era has been a great partner in working together to enhance the fan shopping experience, both on game nights and throughout the week.”

“As the official cap of the Buffalo Sabres, this was an important opportunity for us to be able to expand our partnership with the team as we help to enhance the experience of all fans,” said Josh Feine, vice president of sports marketing, corporate partnerships and business development at New Era Cap. “The Buffalo Sabres New Era Store will feature a much greater assortment of New Era products making it an essential stop while visiting downtown Buffalo.”

Authentic Adidas 50th Season Commemorative jerseys and replica Fanatics jerseys are both currently available at the Buffalo Sabres New Era Store. The store also features a New Era cap wall with a specially designed 50th season commemorative Sabres cap, along with a wide variety of traditional and uniquely designed hats. New Era Cap has four additional retail locations on the 100 and 200 levels of KeyBank Center that are open for fans on game nights.

New Era Cap’s naming rights to the store signify just one element of the partnership renewal agreement that is centered around maximizing the fan experience. New Era will continue to present the fan-favorite “Cap Shuffle” on the videoboard during Sabres games. The company has helped recognize dozens of area advocates by helping create the One Buffalo Community Award in 2016. New Era Cap will continue to present the award to community members who make a difference this season. The Sabres Skills Challenge Presented by New Era is set to return later this season. More details will be available in the future.

New Era Cap Co. is an international lifestyle brand with an authentic sports heritage that dates back over 90 years. Best known for being the official on-field cap for Major League Baseball and the National Football League as well as the Authentic Cap of the NBA, New Era Cap is the brand of choice not only for its headwear collection, but also for its accessories and apparel lines for men, women and youth. For more information, visit www.neweracap.com.

Pegula Sports & Entertainment (PSE) streamlines key business areas across all Pegula family-owned sports and entertainment properties, including the Buffalo Bills, Buffalo Sabres, Buffalo Bandits, Rochester Americans, Rochester Knighthawks, LECOM Harborcenter, Black River Entertainment, ADPRO Sports, PicSix Creative agency and numerous hospitality properties. PSE aims to be a leader in the sports and entertainment industry by bringing together the individual resources, capabilities and talents of each of its entities to create a cohesive and sustainable brand that together represents the Pegula family’s interest. PSE’s mission is exemplified by its One Buffalo initiative, which seeks to unite Western New York and serve as a representation of teamwork through a deeper connection between Buffalo sports teams, fans and the community.