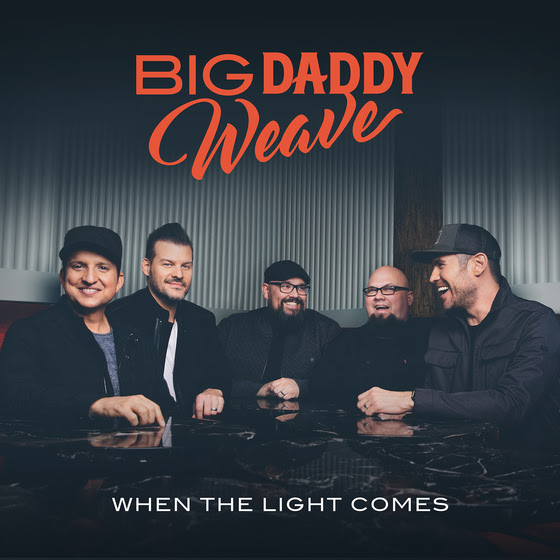 The anticipated new project from Big Daddy Weave, “When The Light Comes” (Curb | Word Entertainment) drops today. With a successful album kick-off, thanks in part to its first single, "Alive," hitting No. 1 at radio, the launch of lead vocalist Mike Weaver's book, “I Am Redeemed,” the debut of their own reality show on TBN, and a headlining tour that just opened last night, the light is certainly shining for the members of Big Daddy Weave.

Each of the 12 songs found on “When the Light Comes,” the band's ninth studio project, encompasses a deep and personal faith in Jesus.

A press release said, “Produced by the band's guitarist, Jeremy Redmon, all five band members – Mike Weaver, Jay Weaver, Joe Shirk, Brian Beihl and Redmon – have individually learned what it means to truly live by faith and to trust in a God who makes all things new, as the inspirational and uplifting themes found in the group’s music were desperately needed by the members themselves. Instead of avoiding the painful truth of their struggles over the past three years, the band pushed themselves into all of the songs and during that process, an underlying current of rejoicing broke through.”

As bassist Jay Weaver put it, “Only Jesus can turn sorrow into joy.”

Big Daddy Weave's headlining "The Alive Tour" just kicked off in Tulsa, Oklahoma, and is slated to run through this fall. The tour, which has the band performing many of its new songs as well as previous hits and fan favorites, is the final leg of a year-long "The Alive Tour." Running through Nov. 24, the most updated tour schedule can be found here.

Additionally, Big Daddy Weave's first reality series just premiered this past Wednesday on TBN. The eight-episode series is slated to air every Wednesday on the network at 9:30 p.m. ET. Check local listings to catch the new episodes, or stream previously aired and the new episodes on-demand through the free TBN app available at TBN.org.

Mike Weaver, who was given the inspiration for the band's reality series, also collaborated with the band’s manager, Jim Scherer, to pen the book “I Am Redeemed – Learning to Live in Grace.” Published by Hachette Book Group, the book is available now through iamredeemedbook.com and wherever books are sold.