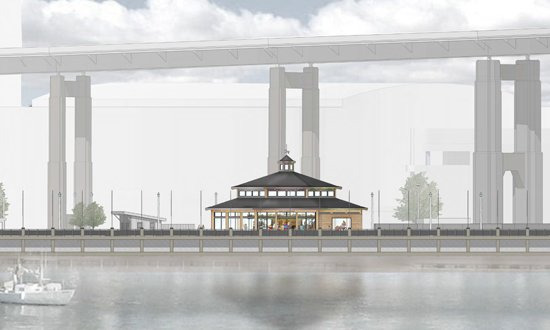 ECHDC approves next steps for carousel project at Canalside

The first approval was for the acquisition of an 8,565-square-foot parcel along the Central Wharf at Canalside from the City of Buffalo to facilitate the construction of the Buffalo Heritage Carousel project. It will consist of constructing a building near the corner of Prime and Perry streets to house the nearly century-old De Angelis Carousel.

ECHDC will acquire the property from the city for $1.

“The carousel will be a colorful new attraction that will help history come to life at Canalside,” ECHDC Chairman Robert Gioia said. “This project is part of Gov. Cuomo’s overall vision for activating Buffalo’s waterfront and will complement the recently opened Explore & More Children’s Museum.”

Spillman Engineering in North Tonawanda manufactured the vintage menagerie, park-style carousel in 1924 for Dominick De Angelis. The carousel was in operation until the 1950s at which point it was stored by the De Angelis family until Buffalo Heritage Carousel acquired it with a goal of providing family-oriented recreation on Buffalo’s waterfront – and to celebrate Western New York’s industrial heritage.

Gov. Andrew M. Cuomo issued a $1,200,000 matching grant to begin the project and, today, the ECHDC board officially committed that funding toward the building construction. It authorized ECHDC to enter into a land development agreement and lease with Buffalo Heritage Carousel Inc.

KeyBank, along with the First Niagara Foundation, matched Cuomo’s $1,200,000 grant. The Margaret L. Wendt Foundation provided a grant of $250,000 to purchase the carousel, while Assemblyman Sean Ryan secured a grant of $600,000 for the carousel restoration, New York State Sen. Chris Jacobs secured a grant for $500,000 for the building, and the Buffalo and Erie County Greenway Commission awarded $200,000 for capital expenses. The Russell J. Salvatore Foundation, Wegmans and West Herr have also been recent donors to the project.

Buffalo Heritage Carousel volunteers continue to work on the meticulous restoration of the carousel pieces while raising funds to build, operate and maintain the carousel. The carousel is predicted to open in the summer of 2020.

Laurie Hauer-LaDuca, president of Buffalo Heritage Carousel, said, "We are working to finalize building plans so that this historic park carousel can make its debut in the summer of 2020 after being hidden away for 60 years. This rare and historic carousel will be powered by the sun, offering families an opportunity to enjoy this simple pleasure filled with lights and music serving as the latest family recreational and educational attraction at Canalside, as well as bolstering Buffalo Heritage Tourism.”

"We have an extremely generous community, but sometimes the last dollars are the most difficult dollars to raise – and we still have a challenge ahead of us. Today we are launching our ‘Race to the Finish Line’ campaign with the goal of raising $1,200,000,” said Corky Burger, Buffalo Heritage Carousel capital campaign director.

Carousel sponsorships are available, including the Wurlitzer band organ and adopt-a horse/animals. For sponsorships, email [email protected]. Donations also can be made at buffaloheritagecarousel.org.

Associated with the carousel project, the ECHDC board also approved a contract to Scott Lawn Yard Inc. to shift the children’s beach, located at the southern end of the wharf, further south to accommodate the new carousel building.

The new beach will be approximately the same size, but will have improved access from the wharf and an adjacent parking lot. The re-designed beach will be surrounded by boulders and landscaping.

Buffalo Heritage Carousel was formed as a 501(c)(3) nonprofit organization to purchase and restore a vintage menagerie, park-style carousel that was manufactured in 1924 by Spillman Engineering in North Tonawanda; and to house the carousel in a building at the revitalized urban waterfront at Canalside. The Buffalo Heritage Carousel’s mission is to provide entertainment, education, and to celebrate the history of carousel manufacturing in Western New York.

The ECHDC is governed by a nine-member board consisting of seven voting directors and two non-voting, ex-officio directors. For more information on ECHDC, visit https://esd.ny.gov/erie-canal-harbor-development-corporation-0.