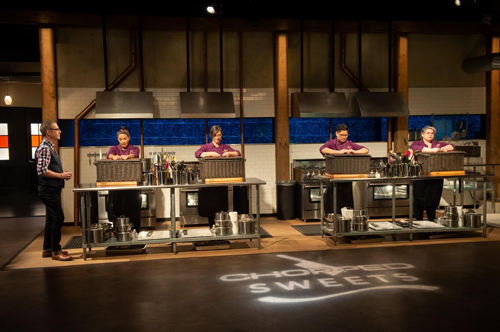 A look at "Chopped: Sweets Showdown," courtesy of the Food Network.

In each episode four chefs have a sweet-themed ingredient in their mystery baskets that they must use through three rounds to create different dessert iterations with a limited amount of time. A rotating panel of “Chopped” and special guest judges, including Florian Bellanger, Valerie Bertinelli, Maneet Chauhan, Scott Conant, Amanda Freitag, Alex Guarnaschelli, Marc Murphy, Chris Santos, Martha Stewart, Sylvia Weinstock and Zac Young, determine which chefs from each heat will move on to the finale for a shot at the $50,000 grand prize.

"When thinking of decadent items such as cake, chocolate, doughnuts and ice cream, an enjoyable and indulgent dessert comes to mind, but having these items added into each rounds' mystery baskets that the competitors must seamlessly incorporate into their dishes makes for an epic showdown that pushes the chefs outside their comfort zones to solve this sweet-themed culinary puzzle," said Courtney White, Food Network president.

In the premiere episode, the chefs must work with chocolate as the main sweet ingredient in each round. Spicy booze and a book filled with bonbons are in the mix for the first round. An oversized beverage meets a stinky cheese in the second basket, and the third round features a can of something that could give the competitors reason for concern, as they seek to make chocolaty showpieces that will get them to the finale. Additional featured sweet ingredients include cakes, doughnuts and ice cream, where, in a “Chopped” first, all four competitors have their own ice cream machine to work with during each round, as milkshakes, ice cream sandwiches and sundaes are on the menu. The four winners from the preliminary rounds face off in the grand finale with the last chef standing walking away with sweet bragging rights and $50,000.

Fans can get an exclusive look at “Chopped: Sweets Showdown” at FoodNetwork.com/Chopped. Get a behind-the-scenes look at the competition, learn more about the “Chopped” judges, and follow the competition using #Chopped to describe your sweet tooth craving.