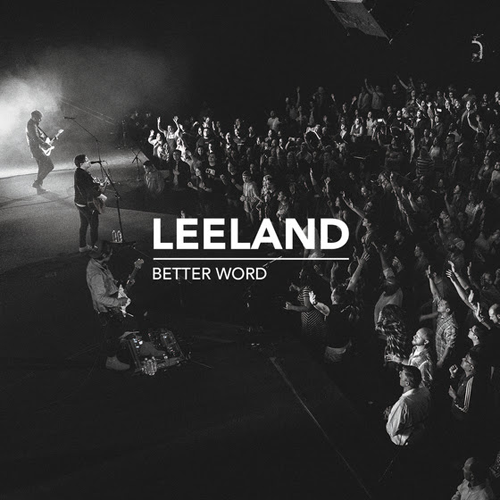 Leeland, comprised of founding frontman Leeland Mooring and fellow singer/songwriter and worship leader Casey Moore, have spent a decade-plus career considering what worship truly means through the medium they know best: music. Inspiring and facilitating musical worship in various settings around the world, Mooring and Moore have a unique front-row vantage point to observe how people’s perspectives of God, others, and themselves are shaped by personal moments of praise.

It explains why “Better Word,” Leeland's eighth release, is a live 12-song worship experience, captured earlier this year during a gathering of fellow worshipers at Christ For The Nations (CFN) in Dallas.

As for the songwriting and accumulating of songs for “Better Word,” Mooring explained, “We usually don’t start seeing a theme emerge until we’re in that mode of finishing songs; but right in the thick of ‘Better Word’ we found that all of these songs weren’t trying to be anything. They were simple, easy to sing, and the lyrical themes were either about Jesus and his goodness, or songs of faith that challenge us to lift our eyes off of our circumstances and onto the face of Jesus. I really feel like it’s a returning back to the things Leeland did at first.”

The album's third track, "Way Maker," is a powerful favorite of Mooring and Moore. Originally made popular by Nigerian gospel singer Sinach, the globally rising worship standout has quickly, and inspiringly, gained traction in churches around the world. It's no wonder why Mooring and Moore wanted to cut their own rendition of the song, which is available now with any pre-order of “Better Word.” A video for the song also released, and can be viewed here. Additional songs will become available as instant grats in the coming weeks leading up to Sept. 13.

For Mooring, worship is much more than a lyric, or a song, or even the gathering and singing.

“Worship is a combination of alone time with Jesus that is planned, and the not-so-planned moments – all of the in-between times in the day when I’m reminding myself to fix my heart and mind on Him,” Mooring said. “It’s incredible how fast singing, saying, and thinking on him so quickly changes my attitude and perspective.”

Leeland came to the forefront of the worship music world in 2004 and debuted their first project, the revolutionary “Sound of Melodies,” in 2006. Fast forward to now, with four Grammy nominations and eight GMA Dove Award nominations under their belts, Leeland has become one of the most important voices in a new generation of worship music. Their lives, ministry, and music are a true extension of their passion to simply worship God personally and in community.

For the latest information on Leeland, visit Leelandonline.com.