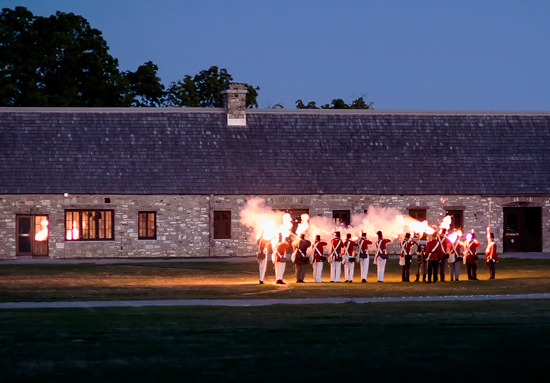 The "War of 1812 Encampment" features a unique evening battle on Saturday, Aug. 31, demonstrating how the British made a surprise attack on the fort in December 2013. The Mackenzie Highlanders open up the evening program with lively bagpipes and drums. One must arrive before 7 p.m. to get tickets for the evening program. (Photo by Wayne Peters)

Out with a bang: Old Fort Niagara's 'War of 1812 Encampment' features evening battle

Old Fort Niagara is hosting its final reenactment of the season, the “War of 1812 Encampment,” on Aug. 31 and Sept. 1, at the National Historic Landmark in Youngstown. This encampment portrays the British attack on Fort Niagara during the American occupation in December 1813, and includes a special evening battle and daily activities for all.

“Picture being as close to Canada as we are today while engaging in cannon fire across the Niagara River. That’s what it was like at Fort Niagara in 1813 during the War of 1812,” said Robert Emerson, executive director of the Old Fort Niagara Association. “The upcoming encampment shows and tells the story of surrender of the fort to the British, which was the last time Fort Niagara was engaged in military conflict on our turf.”

During the day on Saturday and Sunday, reenactors will present demonstrations, and visitors can be part of living history for the weekend. Additional activities include daily battle reenactments, children’s games, recruiting programs, displays of equipment, military music, artillery firings, and soldiers’ daily life tasks.

The Officers’ Club, just outside the fort's footprint, will be open during the encampment from 11 a.m. to 4 p.m. for tours and access to the World War II display. The lighthouse will also be open from noon to 3 p.m.

The cost to attend the event is $14 for adults, $10 for children ages 6-12, free for children 5 and under, and free to members of the Old Fort Niagara Association. Event information is also available at www.oldfortniagara.org/event/100153/war-of-1812-encampment.