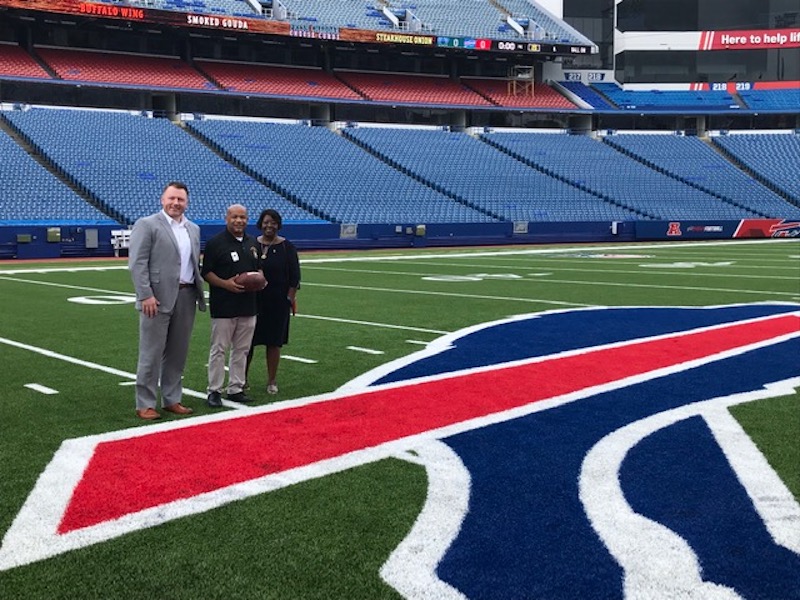 “One of the things I love about my statewide tour is being able to visit the places that bring people together,” Heastie said. “I keep hearing that no one circles the wagons like the Buffalo Bills, and you can see that in the way the fans come together – whether they are at New Era Field or catching the game at the Blackthorn Restaurant, enjoying a plate of wings. As our cities and infrastructure grow and age, the Assembly majority will work to get them the tools and resources they need to support the community.”

“I am so glad that I could bring Speaker Heastie around the district today, and especially to New Era Field – home of the only NFL team to play home games in New York state,” Burke said. “Western New Yorkers are deeply invested in their communities, and I will continue working to ensure the state invests back in them. And if you ever want a good display of that passion, just start singing the Bills ‘Shout Song’ or ask about the best wings in town.”

Heastie and Burke first went to New Era Field, the home of the Buffalo Bills, where they were joined by Assembly Majority Leader Crystal Peoples-Stokes. In 2013, as a part of the Bills 10-year lease to stay in Buffalo, the Bills organization, Erie County and New York state contributed to capital improvements to enhance the fan experience at New Era Field, including implementing new technology, building the west end plaza and renovated and expanded concessions.

The next stop on the tour was Lackawanna City Hall. The building was completed in 1969, but is now too large for the city’s needs, and is plagued by water leaks, lack of insulation and inefficient HVAC. Renovations on the site of the future City Hall, which is the former Knights of Columbus building, as well as demolition of the current building, will cost an estimated $3 million to $5 million and will take about two years to complete. The city is seeking state funding for the project.