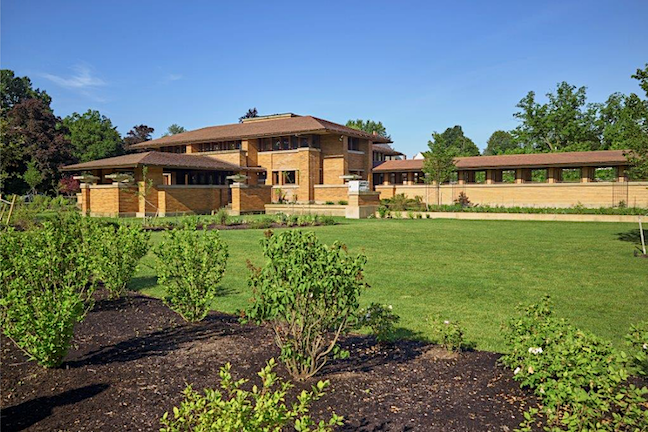 Gov. Andrew M. Cuomo on Monday announced the completion of the restored Frank Lloyd Wright-designed landscape on the estate of the Darwin D. Martin House, the final component of the overall restoration effort that has spanned more than two decades and received more than $50 million in investments in the National Historic Landmark and New York State Historic Site.

The Martin House received $24 million in total funding from New York beginning in 1993, and Cuomo closed the gap with a $5 million commitment. Those final funds were used primarily to rehabilitate the historic landscape, preserve the Barton House (1903) – the secondary residence on the estate – and complete the restoration of the second floor of the Martin House.

"The Darwin Martin House is one of Western New York's most iconic attractions," Cuomo said. "The restoration of the historic landscape is an outstanding addition to this important piece of Buffalo's growing architectural tourism industry."

"The Darwin Martin House is part of the exceptional architectural history of Western New York and the fabric of the Parkside neighborhood," said Lt. Gov. Kathy Hochul, who spoke at the event. "The restoration of this iconic Frank Lloyd Wright design represents the vision of an entire community and has long been a top priority for state investment. With the estate now restored to its former glory, it will be even more of an economic engine for the City of Buffalo, drawing visitors from around the world to experience this unique attraction."

Wright's Martin House is an example of the legendary designer's vision to create organic architecture that promotes harmony between the built environment and the natural world. At the Martin House estate, the multiple structures, extensive furnishings and decorative elements combine with the lavish landscape to create a unified, interrelated design composition. The historic landscape has now been fully realized with the placement of thousands of floral plantings, as well as trees, shrubs and vines, which artfully blur the lines between the buildings and the exterior spaces.

The historic landscape represents a contributing feature to the overall significance of the 1.5-acre multi-residential city estate. Wright created homes in harmony with nature. He developed an integrated design approach unifying buildings, interior decorative elements and exterior landscape in an organic style, deriving inspiration from the natural world. The Martin House landscape plan combines formal aspects of the English Garden tradition and informal landscape elements. Wright arranged the Martin House plan to frame the trees and gardens beyond the walls and windows with each space open to views outside and artfully giving landscape features a presence within.

Bayer Landscape Architecture, located outside Rochester, was commissioned to carry out the restoration of the historic Wright-designed landscape which includes:

•Restoration of the visual and spatial relationships between the site's architectural and landscape features;

•Recreation of the floricycle, the most intricately designed element of Wright's landscape plan;

•Reinstallation of the English border gardens that flank the pergola, contrasting the more naturalistic plantings that define the boundaries of the historic property;

•Redefinition of the outdoor "rooms" and architectonic garden elements conceived by Wright.

Preservation of the mature century-old Copper Beech tree – one of only two remaining vegetative features from the historic period; and

•Replacement of trees at historic locations on the property, as well as the return of street trees along the borders of Jewett Parkway and Summit Avenue in conjunction with the City of Buffalo.

The restored landscape is a new source of education programs and interpretation for tours, community events and dialogues about the importance of nature and design in everyday life. The landscape project also included site lighting, wayfinding, and a courtyard and café area.

New York State Office of Parks, Recreation and Historic Preservation Commissioner Erik Kulleseid said, "New York State Parks thanks the governor for his commitment to funding the important work done at the Martin House Complex. An icon for Western New York, this campus attracts visitors from around the world and to now have it complete will only serve to draw even more visitation each year. We look forward to an ongoing partnership as we transition this restoration project into the true experience it was always meant to be. "

Empire State Development President, CEO and Commissioner Howard Zemsky said, "Phase II of the Buffalo Billion has brought the Darwin Martin House grounds and gardens back to life, capping more than 20 years of work to fully restore this Buffalo treasure and ensuring visitors to the city for decades to come."

Erie County Executive Mark Poloncarz said, "Frank Lloyd Wright intended for landscape and nature to partner with his visionary architecture, creating spaces that bring the outdoors inside and immerse visitors in a serene and natural setting. The architect's original vision for the Darwin Martin House complex has now been fully realized with the completion of the landscaping on these grounds, and the effects are incredible. Erie County is proud to have partnered in the restoration of this unique, internationally known architectural treasure, which is now poised to attract more visitors than ever."

City of Buffalo Mayor Byron W. Brown said, "Buffalo has been impacted and shaped by some of the most famous architects of the 20th century. Now that the restoration project is finished, thanks to the governor's support, the architectural history of Buffalo will get even greater attention."

Martin House Board President Kevin R. Malchoff said, "We are honored that the Martin House is a New York state historic site and, significantly, is the first 20th century architectural representation among the state's 36 historic sites. New York's past investment in the restoration through state grant funds has been critical to our success, and the state's commitment to enter into a long-term cooperative management agreement with the board that would, in part, provide for long-term capital investment in the Martin House is another reason to celebrate."

Bayer Landscape Architecture Principal Mark H. Bayer said, "The completion of this project has brought dramatic changes to the grounds of the Darwin Martin House, re-establishing the spectacular landscape that had been missing for more than eight decades. The rehabilitated garden allows visitors to once again experience the full vision that Frank Lloyd Wright shared with the Martins for this property – a vision where building and nature are fully integrated."

Martin House Executive Director Mary Roberts said, "The Martin House is a project that has captured the imaginations and hearts of many. It is a symbol of what a community can do when it sets its mind to achieving something important. Thank you to New York state and to all our stakeholders for helping us restore and recreate Frank Lloyd Wright's vision for this masterpiece of architecture, design and landscape."

Wright (1867-1959) is internationally recognized as one of the most important figures in 20th century architecture and design. His genius is marked by his vision to create a new form of American architecture based on the open landscape of the Midwestern prairie. Wright redefined traditional concepts of space by physically and spiritually connecting the built environment to the natural world. He is best known for his "Prairie-style" homes, efficient office buildings, and innovative furniture and decorative designs. As of July, the United Nations Educational, Scientific and Cultural Organization has voted to include The Twentieth Century Architecture of Frank Lloyd Wright on the World Heritage list.

The Darwin D. Martin House Complex was designed for Larkin Soap Company executive Darwin D. Martin and constructed between 1903 and 1905. The complex is a one-of-a-kind composition consisting of the main Martin House, the smaller Barton House, constructed for Martin's sister and her husband, a carriage house with chauffeur's apartment, a gardener's cottage (added in 1908), and a glass-roofed conservatory linked to the main house by a 100-foot pergola (covered walkway), all integrated with the landscape that surrounds them.

The Martin House is open year-round and offers a wide range of tour, educational, special event and rental programs, and operates a museum store and café on site. Information is available at www.martinhouse.org or by calling 716-856-3858.