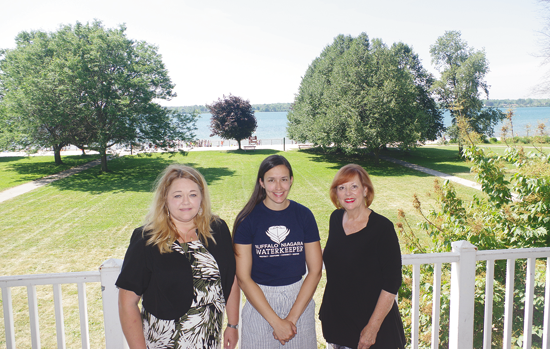 Jennifer Pusatier, Elizabeth Robbe and Beverly Kinney, organizers of the Paddles Up Summerfest, are pictured on the patio of the Falconwood, site of activities that are part of the expanded Paddles Up event. (Photo by Larry Austin)

Paddles Up expands with Summerfest

On the heels of the winter Footprint Festival in Beaver Island State Park, Paddles Up has expanded into the Paddles Up Summerfest for 2019.

The Grand Island Footprint Festival’s success in the winter has inspired organizers of that event to turn up the intensity of the 14th annual Paddles Up, which will take place Saturday, July 27.

Paddles Up Summerfest will still feature its free, fun paddle around Beaver Island’s shoreline at 10 a.m., but activities will continue all day with a festival atmosphere centered near the Falconwood (formerly known as the Beaver Island clubhouse or casino).

Jenn Pusatier of the Grand Island Chamber of Commerce said there was so much positive after the Footprint Festival that she and town Councilwoman Bev Kinney looked to duplicate the theme in some way.

“It was such a big success, I had people asking already if we would do it again this year,” Pusatier said of the Footprint Festival – which included snowshoeing, horse and carriage rides, ice carving demonstrations and other winter activities.

Similar to Footprint Festival, with Summerfest, “The whole park will be open for kind of a good, family fun day. There’s something for everybody,” Pusatier said.

“There was such a great interest in expanding. Once we started planning it, there was interest in adding on,” Kinney said. “We worked off the Footprint Festival and what was successful there and what people really enjoyed.”

The Buffalo Niagara Waterkeepers/Greenway Commission are hoping for another 300 kayaks on the river for the noncompetitive paddle, continuing the Paddles Up theme (pre-registration and kayak rentals can be found at https://bnwaterkeeper.org/paddlesup).

Those who paddle out into the river will see the ongoing restoration efforts in the water, said Buffalo Niagara Waterkeeper’s Elizabeth Robbe.

At noon, the Outdoor Adventure Race (O.A.R) will take place by Niagara Outfitters. The highly competitive race will include a sprint-style adventure race featuring a 3.5K kayak paddle followed by a 5k run. (Visit https://www.itsyourrace.com to pre-register, or day-of registration starts at 9:30 shelter 2A.)

Bands will play at the Falconwood from noon to 3 p.m. (Adams Acoustic Band) and from 4 to 8 p.m. (legendary Rochester-area party band Nik and the Nice Guys).

From 11 a.m. to 8 p.m., beer and wine will be available at Paddles Up shelter and then at the Falconwood.

At 2 p.m. a “GI bicycle Stampede” sponsored by Solar Park Energy of Grand Island and organized by Buffalo Slow Roll will gather in the north end of the large parking lot.

A kids zone, horse and carriage rides and other events are planned.

The events are free thanks to sponsorships from Solar Park Energy.

“But it should be another awesome event for this town,” Pusatier said. “I mean, bringing together all these organizations, this is why we live in this town. There’s nothing more rewarding at the end of the day.”

“This will be just like Footprint Festival. When I walked out there and saw skiers and hikers, the park was moving and families were out, people were having a good time.”