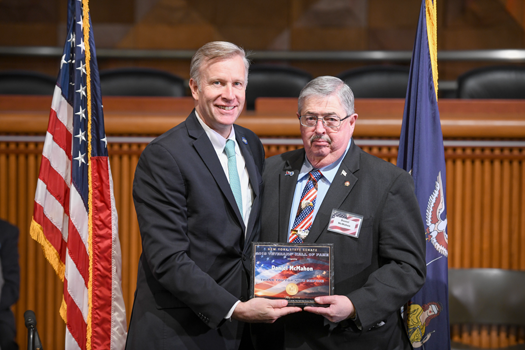 In a ceremony at Pfc. Charles N. DeGlopper Memorial VFW Post 9249, New York State Sen. Chris Jacobs recognized lifelong Grand Island resident Daniel McMahon as a 2019 New York State Veterans’ Hall of Fame inductee. McMahon, who was also honored in a statewide ceremony in Albany in May, was presented with a framed proclamation marking the honor before his fellow veterans and post members.

“Daniel McMahon displayed incredible bravery during very dangerous combat missions with the 9th Infantry Division in the Mekong Delta during the Vietnam War,” Jacobs said. “His valor in service to his country earned him numerous commendations, and his service to his fellow veterans in the decades following the war have earned the appreciation of a grateful state and community.”

In March of 1969, he was deployed to Vietnam, operating in the 3rd and 4th Corps of the 9th Infantry Division in the Mekong Delta, one of the most strategically significant battle areas that saw some of the war’s most savage and ferocious fighting. In recognition of his combat service, McMahon received the Vietnam Service Medal with two Bronze Service Stars, the Republic of Vietnam Campaign Medal, Bronze Star Medal with “V” Device, Army Commendation Medal, Vietnamese Cross of Gallantry with Palm, Civil Actions Medal with Oak Leaf and a Combat Infantryman Badge.

McMahon completed his active service at Fort Hood, Texas, and was honorably discharged as a specialist 4. Upon returning to his hometown of Grand Island, he immediately became a member of DeGlopper Memorial VFW Post 9249, where he has been an active member over the years, serving as post quartermaster and post commander. He has also held numerous leadership roles within the VFW organization, most notably Erie County Council commander for two years and as the present commander of District 6 VFW Department of New York.

In addition to his services to his fellow veterans, McMahon has been an active member of the Grand Island Volunteer Fire Department for more than 57 years. He was an original member of the paramedic crew for 26 years and a communications supervisor for 14 years.

“Daniel McMahon’s lifetime of service is a wonderful example of what the New York State Senate’s Veterans Hall of Fame represents – honoring people who have distinguished themselves in their life calling of military and civilian service,” Jacobs said. “He is a very deserving of this great honor and it is a privilege for me to recognize him today.”

The New York State Senate Veterans' Hall of Fame was created to honor and recognize outstanding veterans from the Empire State who have distinguished themselves both in military and civilian life. Jacobs’ press release read, “Their meritorious service to our nation deserves the special recognition that only a Hall of Fame can provide, as a fitting expression of our gratitude and admiration.”