With another school year in the books, it also means the close of another season of Niagara-Wheatfield athletics.

Phew, what a year it was.

The 2018-19 Falcons athletics program had several teams post great success throughout the entirety of the year.

Just to show you how well it was, let’s go through this:

•Football posted its best record in years and went on to win the Chuck Funke bowl.

•Golf did normal golf things and extended its impressive win streak to 91 and captured its fifth-straight league title. Oh, and that Delisanti kid won the Niagara Frontier League tournament … again … as a sophomore.

•The soccer programs posted some of the best seasons it has recorded in recent years. The boys reached the NFL title game, while the girls reached the Section VI Class A1 finals.

•Hockey, after a very tough winless January, turned it on late to reach the Section VI finals.

•Girls volleyball kept everyone on the edge of their seats, capturing another NFL title, its first Section VI crown and was just one point away from a New York state title.

•Boys basketball posted its best season in years and reached Buffalo State College for the first time in 14 years.

•The wrestling team continued its rich history by winning the Niagara Frontier League and Section VI titles, while the team sent five wrestlers to the state tournament.

•And girls track and field won the NFL for the second year in a row and sent one team member to the state tournament.

All the success this year earned the program its first NFL Supremacy Award. The award is given to the program in the league with the most success combined.

And, obviously, in addition to the team success, a plethora of athletes saw their fair share of accomplishments.

Without further ado, here is the 2019 Falcons Flashback Team MVPs for each team and, additionally, the team of the year.

After going through an unthinkable tragedy in losing teammate Mike Ziegler, the football team posted one of its best seasons in years going 6-3 and really came together as a family in tough times. Jake DeWolf was the heart behind the team and always led the pre and post game prayers at the 42-yard-line. DeWolf was stellar on the field as well, earning Class A1 Defensive Player of the Year and Class A1 First Team on defense. DeWolf finished with 72 tackles on the year.

Parks did it all in his final season as a Falcon. The senior was a Class A1 First Team honoree for offense, as he spent time at quarterback, running back, wide receiver, cornerback and safety. The duo was also All-Western New York honorable mentions.

Under center, Parks ran 82 times for 821 yards and 10 touchdowns, while throwing for 427 yards and three touchdowns.

This duo was an essential part to the tennis team’s repeat NFL title and undefeated season. During the regular season, Fike and Kwiatkowski didn’t lose. The first doubles pairing went 14-0 in matches, 28-0 in sets and 168-18 in games. Both were All-NFL First Team honorees.

Delisanti is now a back-to-back Falcons Flashback honoree with the golf team. The sophomore, once again, dominated the competition in the NFL, posting a 36.75 average. Delisanti also won his second-straight NFL Tournament with a score of 73.

This one was tricky, because the boys soccer team was talented offensively and defensively. In the end, I chose defense. Shoemaker was an All-NFL First Team goalkeeper for the Falcons, while Osetkowski anchored the Falcons defense and was also a First Teamer.

Weir picked up her second Falcons Flashback MVP by doing exactly what she did last year: racking up the points. Weir added 17 goals and nine assists as a sophomore, all while helping guide the Falcons to the Section VI Class A1 title game.

Carlson continued her success in the pool for the Falcons. In seven NFL meets, Carlson won 20 out of her 21 races. The 95 percent winning percentage was key in the Falcons running the table and going 7-0 in the NFL.

One of Carlson’s best feats came in the Section VI Class A Finals, where she qualified for the New York State Meet.

At Sectionals, Carlson, once again, clinched the 200 freestyle with a time of 1:57.19. On top of the 200 freestyle, Carlson finished third in the 100 freestyle, guaranteeing herself a spot in states for that event, as well. Carlson’s time in the event was 53.80.

Where to start here. Sonnenberg and Brochey were the big reasons why the Falcons made it to the state finals.

On the court, Sonnenberg was all over the court laying out and giving up her body to keep the ball in the air, while Brochey was always there to hammer a spike to the floor. Both were All-NFL First Team honorees. Sonnenberg is now a two-time Falcons Flashback Award winner.

Despite a tough season for the group, Klidonas was a bright spot for the Falcons team, as he earned Second Team All-NFL honors.

Achtziger-Hughes, another two-time Falcons Flashback Awards winner, finished her junior season as an All-NFL First Team honoree and finished in second place at the NFL Championship and seventh at the Section VI meet.

Tribbets was a bright spot for the boys cross country team, as he finished the season as an All-NFL Third Team honoree.

Ware was an essential part to the N-W boys basketball run to Buffalo State. The senior point guard averaged 15 points, five assists and four rebounds per game. Throughout the team’s run, Ware would often sacrifice points for assists and helped set up his teammates with good looking shots.

Jackson was the go-to girl on the basketball team, which made it to the Sectional finals. The senior, and two-time Falcons Flashback winner for girls basketball, accumulated 267 rebounds this season, 87 steals and averaged 10.9 points per game. Jackson also notched All-NFL Second Team honors.

The junior, Farr, is a two-time Falcons Flashback Awards winner for the boys bowling team. Farr rolled his way to a 198.18 average for the Falcons, which finished in second place in the NFL. His high series was 673, while his high game was a 257. Farr finished the year as All-NFL Second Teamer.

Hill, as an eighth-grader, finished with the high average for the Falcons with a 174.51. Additionally, her high game was 237, while high series was 586. Hill was an All-NFL Third Team honoree.

Dyer was an All-NFL Second Team honoree in the 100 breaststroke. The senior finished in second place in the event at the league meet.

Another tough one that I couldn’t come down to just one selection. McDougald made a run to the state finals in the 152-pound class and came up just one point shy. In 2018-19 alone, McDougald finished first in five tournaments, one being the Section VI Class A Wrestling Championships and another the Section VI 69th Wrestling Championships and State Qualifier.

Both wrestlers were named All-NFL First Team honorees and two of five N-W wrestlers to punch a ticket to the state tournament.

This is another team that had a lot of talent on its roster. The trio of Franks, Quider and Evarts were the three captains and role models for the youth on the Falcons roster. With 16 years combined varsity experience, the three helped guide N-W to an NFL title and a Sectional finals appearance. Franks was named NFL Player of the Year and First Team, along with All-NYS Third Team. Evarts notched All-NFL First Team honors and All-NYS Seventh Team. Additionally, Quider was an All-NFL First Team honoree and now two-time Falcons Flashback Award winner.

I will add, this was a tough decision, because freshman Elanna Lysiak led the NFL with a batting average that nearly eclipsed .600.

These are two guys that came under the radar and had stellar seasons for the Falcons. Siegmann was an All-NFL First Teamer while posting a .400 batting average and providing stellar defense at first base. Mellerski provided excellent pitching outings each time he stepped on the mound. The All-NFL Second Team honoree held a 0.78 earned run average and pitched a no-hitter versus Lewiston-Porter.

The senior did a little bit of everything for the Falcons, as he scored 33 goals and dished out 22 assists for 45 points. Additionally, Napoleon, according to the team’s Twitter account, was named a high school All-American.

Fike was a scoring machine for the Falcons, posting a ridiculous 86 goals and 15 assists, good for 101 points. The junior was also an All-Section VI First Teamer and All-WNY honorable mention.

The doubles pairing for the Falcons finished with an 11-3 record on the year. The success notched the duo Second Doubles All-NFL Second Team.

Jackson is back at it again. A two-time track and field Falcons Flashback Award winner, Jackson now has four combined FFA’s.

The senior was a Section VI champion and notched another trip to the state meet in the high jump. Jackson was also a key part of the girls’ second straight NFL title as an All-NFL First Teamer.

Vallas was a big bright spot on the boys track and field team. The junior All-NFL First Team honoree was an all-around track athlete for the Falcons this past spring.

This took a lot of thinking and contemplating, but after I really went through and thought, the girls volleyball team got the nod for Best Team.

The girls ran through the Niagara Frontier League during the regular season. The team not only posted an undefeated regular season title-winning record, they also never lost a set. The team didn’t lose its first set until the Section VI Class A finals.

After a win over Williamsville South to clinch the program’s first Section VI crown, the Falcons traveled out to Rochester and defeated Irondequoit to clinch a trip to the state tournament.

The Falcons went 3-3 in pool play on day one, and were just one point away from a state title multiple times.

Between Sonnenberg, Brochey and Franks, the trio were All-NFL First Teamers.

Despite coming just a couple points short of a state title, the team’s season was not just the best volleyball season, but possibly one of the best in N-W athletics history.

Not to mention, the success of the athletic programs made this an incredibly difficult decision.

Wrestling made an incredibly compelling case as NFL champs, Section VI champs and sending five wrestlers to states with one finishing in second place.

Golf is always a possibility. Ninety-one wins in a row is a crazy statistic and the team constantly dominates the NFL and does well in Sectionals.

A bunch of other teams could be mentioned for their success, you can really make a case for most of the programs.

All in all, I felt the season and run girls volleyball had really got people attached to the team and the matches always had a high-energy feel.

Being in Glens Falls for the state finals, my social media was blowing up with people wanting to know how the team was doing.

And who can forget that homecoming welcome from the school and N-W community. 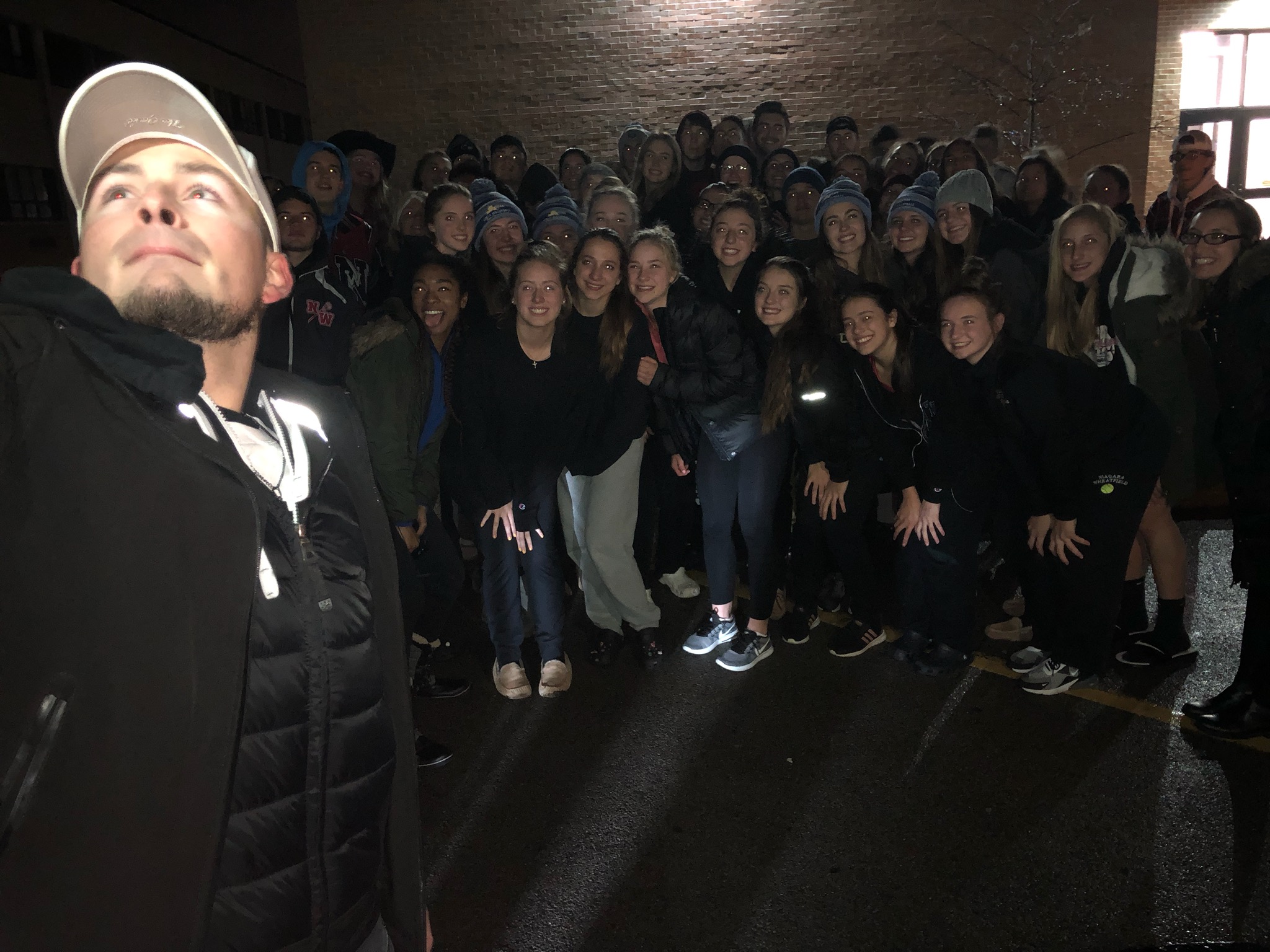