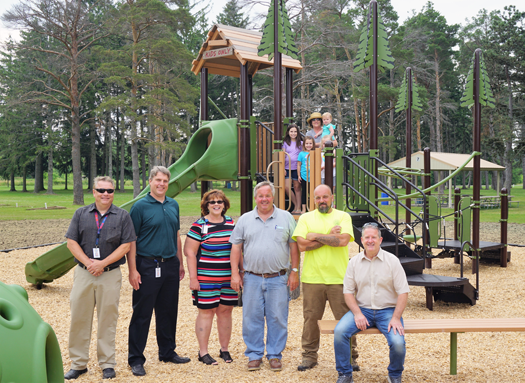 The new play area has been named the “Pine Grove Playground” to remember the history of Krull Park and its past when the north end of the park was referred to as “Pine Grove,” adjacent to the Olcott Beach Hotel. The new facility includes a pine tree theme with modern play equipment to replace the existing playground, which was originally installed in the 1990s.

The completion of the playground is part of a series of improvements to all county parks. The project’s success is a result of the efforts of Niagara County Department of Public Works under the direction of Niagara County Legislature, including Syracuse, who chairs the infrastructure and facilities committee.

“I’d like to acknowledge the efforts of Niagara County Department of Public Works Commissioner Garret Meal, his staff, and Sen. Rob Ortt,” said Syracuse, R-Newfane. “Krull Park holds a tremendous amount of history here, and I couldn’t be happier with the playground’s development for both our residents and visitors to enjoy.”