The Rotary Club of Grand Island called its annual Shred It event “a huge success” on Saturday, June 15, as over two tons of documents were shredded and more than $3,000 was raised for the club to use for youth programs in the town.

Shred It was held in the Tops plaza adjacent to KeyBank on Grand Island Boulevard.

Event Chair and Sponsor Christine Learman said: “Despite the wind and rain, we had a steady stream of vehicles from our Grand Island neighbors and so many expressed how excited they were to purge and shred their paperwork, knowing it was for the good causes supported by our Rotary Club.”

Learman also credited the number of Rotary members who volunteered for the event, adding, “Many hands make light work.”

A portion of the proceeds will be used to support the Rotary Club of Grand Island’s 10-year commitment to support the Miracle League. This is the club’s eighth year of financial support to the league. 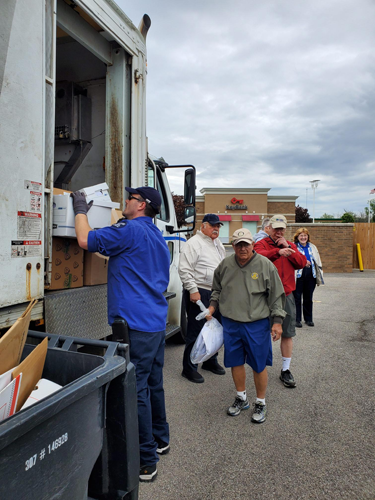 Barlow carries of bag of paper to be shredded to the Shred It employee at the truck. Behind him are Rotary members Angelo Palamuso, Brook Rimes and Mary Haggerty. (Photos courtesy of Rotary Club of Grand Island)