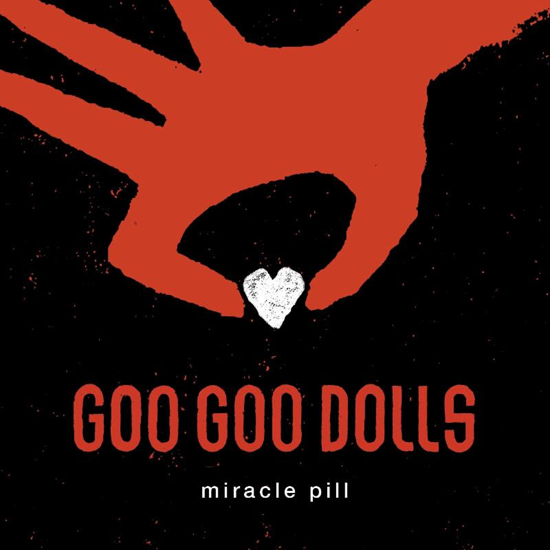 Multi-Platinum, four-time Grammy-nominated rock band Goo Goo Dolls have unveiled their new single, "Miracle Pill," via Warner Records. The track will be featured on the band's brand-new album. also titled “Miracle Pill,” which is set to be released this fall.

Underscored by hummable piano, sweeping guitars, and a swaggering rhythm, the track sees lead singer John Rzeznik cleverly skewer the instant gratification generation with a chantable chorus and a message that goes down easier than anything from the pharmacy.

The track is available now on all digital streaming platforms HERE.

" ‘Miracle Pill’ is a metaphor for the instant gratification and relief we seek from our own circumstances," Rzeznik said. "Are your sad? Take a pill. Are you lonely? Get popular on social media. The fact of the matter is no one has 50 friends, much less 5,000. I'm just trying to articulate my observations of the second decade of the 21st century, with all its angst, avarice, confusion and insecurities. We are inundated by bullshit, cheap shiny objects, and false solutions to every problem and desire we have. I have no answers to these questions, but I don't believe hero worship, life hacks, short cuts and escapism are the answers. I just want to make a real connection with real people in real time."

Earlier this month, Goo Goo Dolls kicked off a co-headlining amphitheater tour alongside Grammy-winning band Train, which has garnered rave reviews right out of the gate. The run will make numerous stops at outdoor venues across North America this summer. Goo Goo Dolls will then embark on several South American tour dates this fall, including a highly anticipated appearance at the iconic music festival “Rock in Rio” on Sept. 29 in Rio de Janeiro. For more information and a complete list of tour dates, visit GooGooDolls.com.

Formed 33 years ago in Buffalo by Rzeznik and Robby Takac, Goo Goo Dolls quietly broke records, contributed a string of staples to the American songbook, connected to millions of fans, and indelibly impacted popular music for three-plus decades. Beyond selling 12 million records worldwide, the group garnered four Grammy Award nominations and seized a page in the history books by achieving 14 No. 1 and Top 10 hits at Hot AC.

2018 saw the Goos tour in support of the 20th anniversary of “Dizzy Up The Girl.”