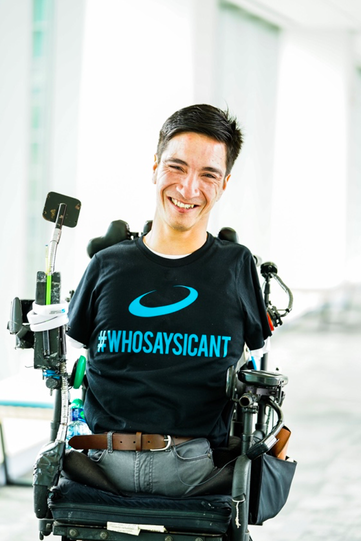 High school football coach Rob Mendez will be honored with the Jimmy V Award for Perseverance at The 2019 ESPYS Presented by Capital One. ESPN President Jimmy Pitaro shared the news with Mendez on this video. The award is given to a deserving member of the sporting world who has overcome great obstacles through perseverance and determination. Mendez was born with tetra-amelia syndrome, a rare disorder that caused him to be born without arms or legs.

“I am incredibly honored, excited and humbled to receive this honor,” Mendez said. “I still remember one of my favorite all-time ESPN anchors, Stuart Scott, delivering his Jimmy V Award acceptance speech. Thank you to ESPN and all of my family, friends and, of course, players for believing in me! Who says, ‘I Can’t!’ ”

Though Mendez himself was not able to play football, he did develop a passion for it at an early age and has channeled his passion for the sport into a standout coaching career. He taught himself the fundamentals of the sport using the Madden video games, became manager of the football team as a freshman in high school, and eventually quarterback coach in his senior year. After graduating, he spent 12 years as an assistant coach for various programs, where he was regularly overlooked for the head coaching position for which he knew he was ready.

Finally in 2018, he was hired as a head coach for the junior varsity football team at Prospect High School in Saratoga, California. In his first season, he led his team to an incredible 8-2 record and narrowly lost the league championship game, 3-0.

His football acumen, positive outlook and genuine love for his team have made him a revered coach, and those around him are endlessly inspired by the adversity he overcomes in his day-to-day life.

Mendez will be presented with the Jimmy V Award for Perseverance at The 2019 ESPYS hosted by Tracy Morgan, live Wednesday, July 10 (8 p.m. EDT), on ABC.

“Rob’s entire life embodies the word perseverance,” Pitaro said. “From the time he was born, Rob has had to overcome all the assumptions others had about what he couldn’t do. Yet his confidence and fierce dedication to following his dream of coaching have inspired so many people – both on and off the field. He has made such a positive impact on his players, other coaches, parents and many across the community – and we are incredibly proud to be presenting Rob with this award at The ESPYS.”

The ESPYS helps to raise awareness and funds for the V Foundation for Cancer Research, the charity founded by ESPN and the late basketball coach Jim Valvano at the first ESPYS back in 1993. ESPN has helped raise close to $97 million for the V Foundation over the past 26 years. Tickets are available for public purchase at AXS.com.