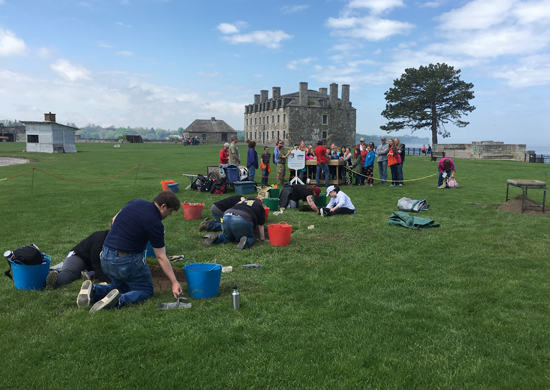 Anthropology students from SUNY Buffalo State College are excavating the foundation of a Revolutionary War-era barracks at Old Fort Niagara during the month of June. Visitors are welcome to watch their progress and talk to them. (Photos by Charlotte Clark)

Anthropology students from SUNY Buffalo State College are spending time at Old Fort Niagara this month. They are participating in an archaeological field school that is actively excavating Building 428, a barracks spanning the years 1756-1813 near the North Redoubt. Built by the French in 1756, it disappears from maps and plans in 1814 without records of why or how. The barracks housed soldiers while they were garrisoned at the fort.

Students Cerrwida Brown, Heidi Cunningham, Melanie Manzella, Brittany McCall and Harrison Moll are scraping away layers of earth in three one-meter-square test units in search of the foundational remains of Building 428. Philip Dickenson, the fort’s curatorial assistant, is also participating. The foundation is expected be one or two courses of stone laid on the ground, upon which a wooden structure, like the preexisting barracks, would have been constructed.

During the excavation, other things will be uncovered in the test units. In the past, discoveries from similar archaeology digs at the fort revealed ceramics (cups, bowls, plates, jugs, crocks), uniform buttons, musket balls and gun flints, bones from animals that were eaten, wampum or trade beads, Native American stone tools, pipe stems, and building materials (window glass, brick, stone, mortar, nails, hinges, clasps, handles and locks). Unearthed artifacts, which are property of New York state, become part of Old Fort Niagara’s collections and are kept on site.

The archaeology students, professors and Old Fort Niagara staff will talk with visitors about their discoveries at the site on weekdays during June, when the weather allows.

At the fort’s collections building, the students will also be looking at and analyzing faunal remains (items left behind when an animal dies) excavated in 2001 from a midden (an old dump for domestic waste) as part of their summer course.

Students, staff and alumni of Buffalo State College are invited to visit Old Fort Niagara and the archaeology dig for free admission on Wednesday, June 19, for “Buffalo State Day.” These visitors are asked to bring ID.

Old Fort Niagara has been the site of archaeology digs since 1979. The partnership began with SUNY at Buffalo (1979-2006) and continues biennially with Buffalo State College (2007 to present) under the direction of Dr. Susan Maguire and assisted by Dr. Melanie Mayberry. The field school maintains a Facebook page, “Old Fort Niagara Archaeology Buffalo State Field School,” where updates are posted regularly for the public to follow.

Old Fort Niagara (www.oldfortniagara.org) is a Registered National Historic Landmark and New York state Historic Site operated by the Old Fort Niagara Association, a not-for-profit organization, in cooperation with the New York State Office of Parks, Recreation and Historic Preservation. The site is open daily from 9 a.m. to 5 p.m. 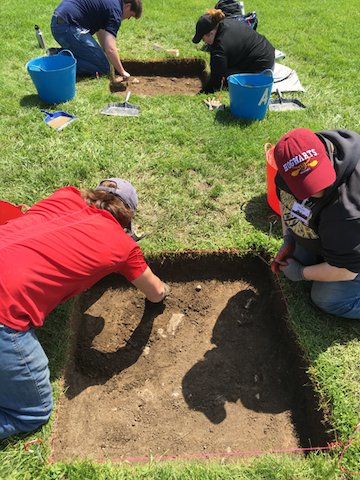 Three 1-meter-square test units are being excavated and studied by the students who spend hours scraping away layers of dirt in search of artifacts. 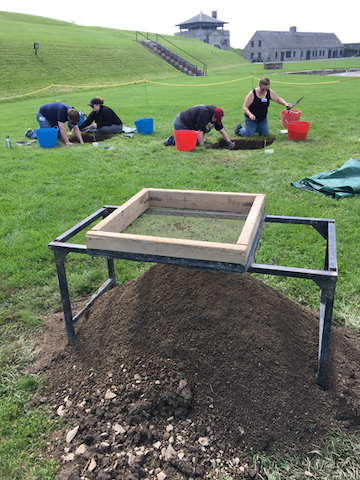 Dirt excavated from the test units is sifted through a ¼-inch screen as an additional method to separate the artifacts from the soil.