Wednesday night’s 2019 Stanley Cup Final Game 7, in which the St. Louis Blues defeated the Boston Bruins, 4-1, to capture their first-ever Stanley Cup, averaged a total audience delivery (TAD) of nearly 9 million viewers (8.914), making it the most-watched NHL game on record and propelling the seven-game Stanley Cup Final and 2019 Stanley Cup Playoffs to numerous viewership and streaming milestones, according to Fast National data from Nielsen and digital data from Adobe Analytics.

•Game 7 averaged a TAD of nearly 9 million viewers (8.914), making it the most-watched NHL game on record;

•Blues-Bruins Game 7 is the most-streamed NHL game ever, delivering an average minute audience (AMA) of 191,500 viewers;

Despite a 4-0 score late in the third period and an eventual three-goal victory by the Blues, Game 7 (8-11 p.m. ET) averaged a TAD of 8.914 million viewers across NBC, NBCSports.com and the NBC Sports app, making it the most-watched NHL game on record and up 4% vs. the previous Game 7 eight years earlier between the Bruins and Vancouver Canucks (June 5, 2011), which averaged a TV-only 8.537 million viewers on NBC. Digital streaming was not yet available at that time.

Game 7 was also up 35% compared to viewership for Blues-Bruins Game 6 on Sunday night (6.610 million viewers).

The term “on record” refers to the current Nielsen measuring system, which began in 1994. Game 7 is believed to be the most-watched NHL game in 45-plus years, when different measurement tools were used to record viewership, making it difficult to verify.

The TAD of 8.914 million does not include the numerous large-scale viewership parties in both cities, with some reporting attendance at those events in excess of 40,000. 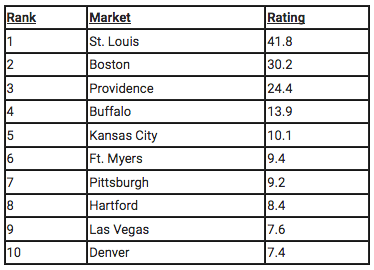 In addition, Game 7 powered 11 markets to register their highest or second-highest NHL rating ever for a game that did not include their home team:

Blues-Bruins also delivered the most-streamed Stanley Cup Final ever, with an AMA of 137,800 viewers, 176.3 million live minutes, and 1.3 million uniques. 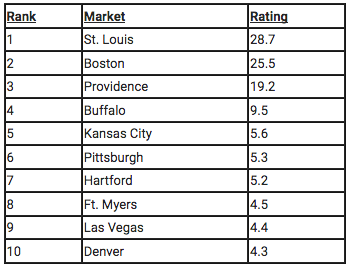 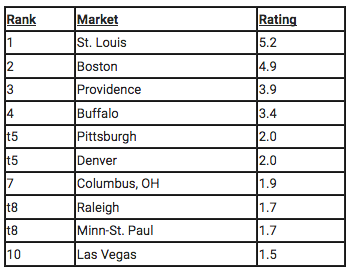