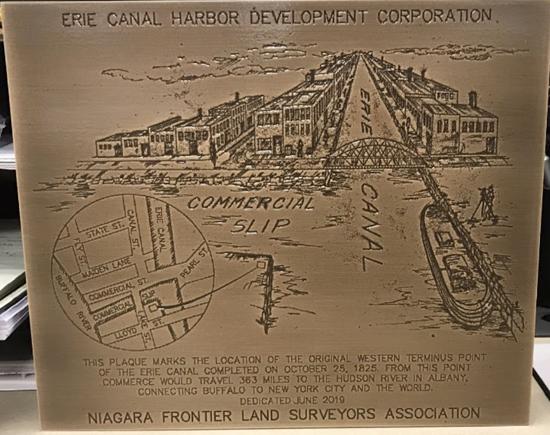 A surveyor monument is typically a small, ground-mounted marker used to formally record a point on the earth’s surface from which other points, angles and distances can be measured. In this case, it is a small plaque with an image of the setting at the time of the opening of this game-changing gateway that altered the course of New York state commerce.

The monument was installed along the replica canals at Canalside near Explore & More – The Ralph C. Wilson, Jr. Children’s Museum.

"The Erie Canal system is an iconic part of Buffalo’s economic ‎past, present and future," said Lt. Gov. Kathy Hochul. "At Canalside, children and families enjoy a year-round destination at a site that was once a center of commerce that put Buffalo on the map. As we celebrate 200 years of our canal system, this marker will serve as an important way for visitors to appreciate the Erie Canal’s role in shaping our state’s history."

"Our role as professional land surveyors is to retrace steps from our predecessors," said NFLSA Regional Secretary and former president Brian Skalman, PLS. "Those involved in this dedication all have contributed in some effort to retracement of portions of the Erie Canal. We dedicate this monument to professional land surveyors past, present and future, to the Erie Canal Harbor Development Corp. and, most importantly, to the citizens of Buffalo who are discovering all that Canalside and the city’s waterfront have to offer."

"This land surveyor monument marks the intersection of one of the busiest commercial staging areas of the 19th century, and we are pleased to acknowledge the historical importance of this exact spot," ECHDC Chairman Robert Gioia said. "ECHDC is working to reclaim and proclaim our past – and to reimagine the way Buffalo’s waterways are woven into the economic and cultural fabric of not only this city, but all of New York."

The monument features a historic street grid, etched historic graphic of the site and the words, "This plaque marks the location of the original western terminus point of the Erie Canal completed on October 25, 1825. From this point commerce would travel 363 miles to the Hudson River in Albany, connecting Buffalo to New York City and the world. Dedicated June 2019."

Built between 1817 and 1825, the original Erie Canal stretched 363 miles from Albany to Buffalo. It was the longest artificial waterway, the greatest public works project in North America – and was a central element in forging a national identity.

Land surveyors, who originally mapped and measured Buffalo’s city streets and neighborhoods, have more recently applied their engineering and measurement skills in researching historic documents and determining the earlier outlines of Buffalo’s street grids and boundaries. In doing so, they were able to trace the history of the spot marked by the new monument.

Before the Erie Canal was built, the “spot” marked by the new plaque was once part of an area designated within the Village of Amsterdam and laid out by surveyor Joseph Ellicott in 1804 for the Holland Land Co. A French settler, Louise LeCouteulx, then purchased land from the Holland Land Co. east of Main Street for a house, and to the west side of Main Street and along the Buffalo River for a chicken farm.

Meanwhile, Gov. DeWitt Clinton was envisioning plans for the Erie Canal. In 1808, the New York State Legislature approved funding to survey a route that would connect Albany to Lake Erie. Ground was eventually broken for the canal’s construction on July 4, 1817; but it wasn’t until August of 1823 that ground was broken for what would become the canal’s western terminus. It was here that canal barges left the Erie Canal, entered the Commercial Slip to Buffalo Creek, now known as the Buffalo River, and their cargo and passengers would transfer to ships sailing west into Lake Erie.

The new monument marks a corner of the original terminus of the Erie Canal, at its juncture with the commercial slip to the south and Little Buffalo Creek and Main-Hamburg Canal to the east. The land was once part of an abandoned Parcel 985, now under ECHDC ownership.

Erie County Executive Mark Poloncarz said, "This small monument represents a big part of the history of our community and our nation. The Erie Canal’s western terminus played a key role in the development of Buffalo and Erie County as well as opening the doorway to western expansion for America. This tremendous linkage is a part of our heritage and will always be remembered here."

Congressman Brian Higgins said, "Western New York’s renaissance has been built on our community’s ability to embrace what is uniquely ours. This dedication by the Niagara Frontier Land Surveyors Association reminds today’s Canalside visitors of Buffalo’s place in the history of the Erie Canal as they take in today’s bustling Buffalo waterfront."

City of Buffalo Mayor Byron W. Brown said, "This plaque serves as a reminder of what the Erie Canal meant to the City of Buffalo’s history and development. As we planned for what is now Canalside, the intention was to honor the historical importance of Buffalo’s location at the canal’s western terminus and continue to tell that story. I thank the Niagara Frontier Land Surveyors for their role in marking the spot with this special plaque."

Assembly Majority Leader Crystal Peoples-Stokes said, "This plaque serves as a permanent reminder of the historic significance of the Erie Canal to or region and the entire state. We hope this monument will give visitors an opportunity to stop and appreciate the history of the Erie Canal and it continued importance to Buffalo and the entire region."

Founded in 1960 as a nonprofit professional corporation, NFLSA is one of 18 regional affiliates of the New York State Association of Professional Land Surveyors (NYSAPLS) headquartered in Albany, has over 1,200 members throughout New York, and is recognized as the unified voice of the New York surveying profession. NYSAPLS is an affiliate of the National Society of Professional Surveyors. The Niagara Frontier Land Surveyors Association serves Erie, Genesee, Niagara, Orleans and Wyoming counties.