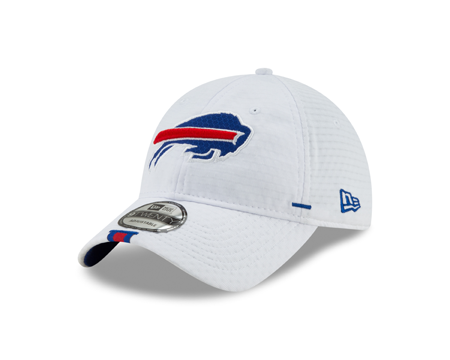 The New Era 2019 Official NFL Training Camp Collection, featuring the NFL 100 logo on the cap’s closure, is available at neweracap.com, as well as major sporting goods and headwear retailers for a retail price range of $30 to $40.

“With the New Era 2019 Official NFL Training Camp Collection, we have created a stylish performance cap that will show your team pride while keeping you cool and dry,” said Ryan DiNunzio, director of football and soccer at New Era Cap. “Whether you’re in the middle of an intense workout out or completing an athleisure look, this collection has an option for everyone.”

The New Era 2019 Official NFL Training Camp Collection offers a mix of silhouettes for men and women, including the 39THIRTY Stretch-Fit, 9TWENTY Adjustable, 9FIFTY Snapback, Women’s 9TWENTY Adjustable, Panama Bucket, Training Bucket and Training Visor. Each cap features a team logo on the front with a unique team color stripe on the front of the brim and the back of the cap. These caps will be worn by NFL players during NFL Training Camp this year.