Hoover was born in Buffalo on March 13, 1928. He was the beloved husband of the late Jean Lourayne (née Reed) Hoover and the loving dad to their children: Kathi (Harry) Applegate, Don (Darlene) Hoover, Nancy Jean Anderson and the late Kenneth (survived by wife Babette) Hoover. He is also survived by 10 grandchildren, 20 great-grandchildren and many extended family and friends.

Hoover enjoyed being with his growing family, was a devoted husband, father, “Gramps” and “Papi.” He worked in vending for many years and then for the Town of Grand Island, where he retired in 1993. He served as a member of the Boy Scouts for over 50 years, earning multiple awards including Scoutmaster of the Year and the God and Service Award. He became a member of Sheridan Park Presbyterian Church in 1957 and served as president during the merger to Faith United Presbyterian Church in 1982. He remained a faithful member, serving in roles such as building maintenance, deacon and elder; also earning the Religious Service Award in 2014. He served his community by delivering for Meals on Wheels, visiting church members who were confined to their homes, and serving as an election inspector for 12 years. He was the oldest member of Loyal Order of the Moose Grand Island Lodge No. 180.

He enjoyed golf, shuffleboard, bowling, hunting and woodworking. He and his wife, Jean, had enjoyed 18 winters in Zephyrhills, Florida.

Services were held at Kaiser Funeral Home on May 21 and a celebration of life service was held on May 22 at Faith United Presbyterian Church in the Town of Tonawanda. In lieu of flowers, donations can be made to Hospice Buffalo. 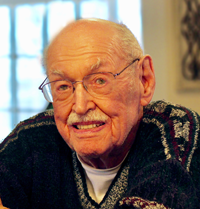