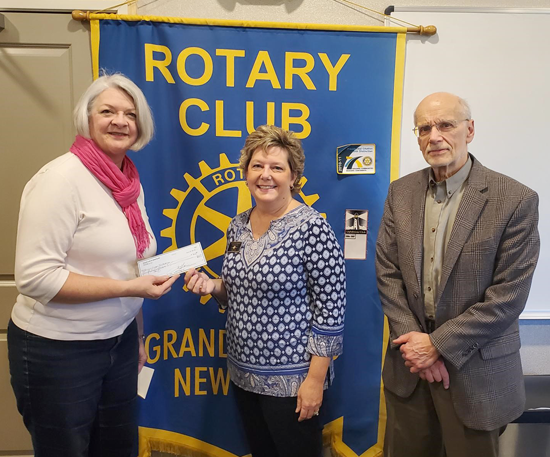 Rotary District 7090 Gov. Melisa Schrock attended the Rotary Club of Grand Island’s breakfast meeting on May 9 at the Holiday Inn Express and commended members of the club on the four youth clubs it sponsors within the Grand Island school system.

The Rotary Club of Grand Island will celebrate its 60th anniversary at a dinner meeting on June 26 at the Buffalo Launch Club. It also sponsors a Grand Island High School Interact club (grades 9-12), a Veronica Connor Middle School Interact club (grades 6-8) and two elementary grade Early Act clubs (grades 4-5). Schrock learned more than 100 students participate in the programs and over the past year there has been more cross club opportunities for service and community engagement. Sherry Miller, a Rotary Club of Grand Island Director and its youth liaison, said there has been an increase in student interest in each of these clubs over the past year and she expects it to grow in future years.

Schrock, who was introduced by John Cooper, outgoing assistant governor, said recruiting new Rotary members and maintaining current members continues to be a major initiative for all Rotary Clubs. “The new generation of Rotary Club members are going to be extremely interested in service projects so I encourage you to continue your focus on service projects and youth involvement,” she said.

Pictured, Schrock received a check for $943.20 from Miller, left, and club President Richard Earne from the Purple Pinkie Polio Fundraiser held during the spring by the four youth groups to bring attention to Rotary’s primary goal of eradicating polio world-wide. Schrock then presented Past President Mike Heigel with a certificate from the district for its membership increase last year.