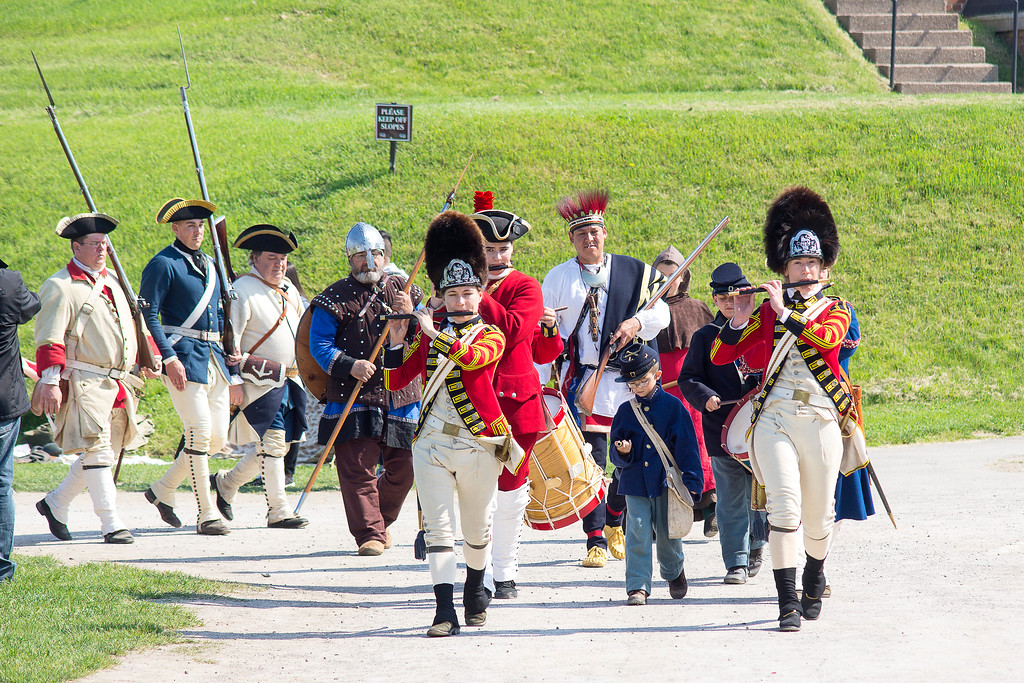 "Soldiers through the Ages," May 25 and 26, involves hundreds of reenactors representing military history since the 15th century. The event begins with a colorful and diverse parade that features all of them at 10 a.m. both days. Also included will be artillery firings, period camps, military vehicles, uniform programs, and medical care on the World War II battlefront. (Photos by Wayne Peters)

Visitors to Old Fort Niagara over the Saturday and Sunday of Memorial Day weekend, May 25 and 26, will be treated to a timeline military event: “Soldiers through the Ages.” This annual reenactment features reenactors as soldiers and civilians from the 15th, 18th, 19th and 20th centuries, special displays of military vehicles, period camps, weapons demonstrations, uniform programs and hands-on activities for families.

“Picture British Redcoats mingling with Vietnam veterans while World War II reenactors drive around in 1940s-era Willys Jeeps,” said Robert L. Emerson, executive director of the Old Fort Niagara Association. “Attending ‘Soldiers through the Ages’ is a great way to learn about our region’s military history over one of our country’s most patriotic weekends.”

Activities begin at 10 a.m. with a colorful and diverse parade of reenactors marching in military chronological order, followed by weapon and uniform programs, artillery demonstrations and military music.

“This event continues to attract new interest from reenactors and visitors alike,” Emerson added. “This year, we have a new participant who portrays a 15th century longbow man from the battle of Agincourt, one the greatest English victories in the Hundred Years’ War.” 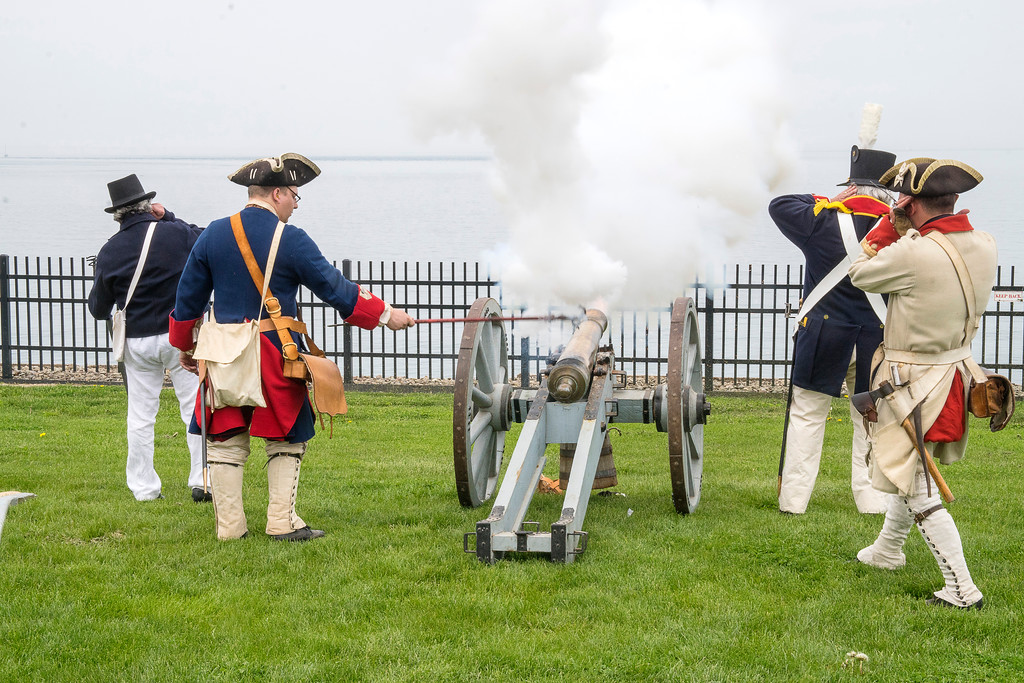 Schedule of activities (both days)

10 a.m. – Colors Ceremony. Accompanied by fife and drum music, soldiers raise the colors of the U.S., Great Britain and France, the nations who held Fort Niagara. Reenactors assemble together and parade.

1 p.m. – 18th Century Uniform and Weapons Demonstration. Find out how soldiers were clothed and equipped during the colonial wars and the American Revolution.

2 p.m. – 19th Century Uniform and Weapons Demonstration. See how soldiers were clothed and equipped during the War of 1812, the Civil War and the Spanish American War. Learn about how weapons technology advanced from the flintlock to the 45/70.

3 p.m. – 20th Century Uniform and Weapons Demonstration. Learn how soldiers were clothed and equipped during World War I, World War II and Vietnam.

Food and drinks will also be for sale at the Log Cabin.

Admission to “Soldiers through the Ages” will be $14 for adults, $10 for children ages 6-12, and free for children under 6, and members of the Old Fort Niagara Association.

On Memorial Day, Monday, May 27, at 11 a.m., the VFW Lake Ontario Post 313 will hold a special memorial service at the historic Fort Niagara Cemetery. Afterward, visitors are welcome to the historic site where veterans and active military personnel will be admitted for free for the day with ID.

The fort will present these additional reenactments this summer:

•Aug. 10-11: “Soldiers of the Revolution”: This living history event recreates the War for Independence on the New York frontier. Battle reenactments, hands-on activities for families, plus music and games.

•Aug. 31 and Sept. 1: War of 1812 Encampment: Living history during the day and an evening battle reenactment show how the British surprised the American garrison during the War of 1812.

Old Fort Niagara (www.oldfortniagara.org) is a Registered National Historic Landmark and New York State Historic Site operated by the Old Fort Niagara Association, a not-for-profit organization, in cooperation with the New York State Office of Parks, Recreation and Historic Preservation. The site is open daily from 9 a.m. to 5 p.m. with the last tickets sold at 4:30 p.m. 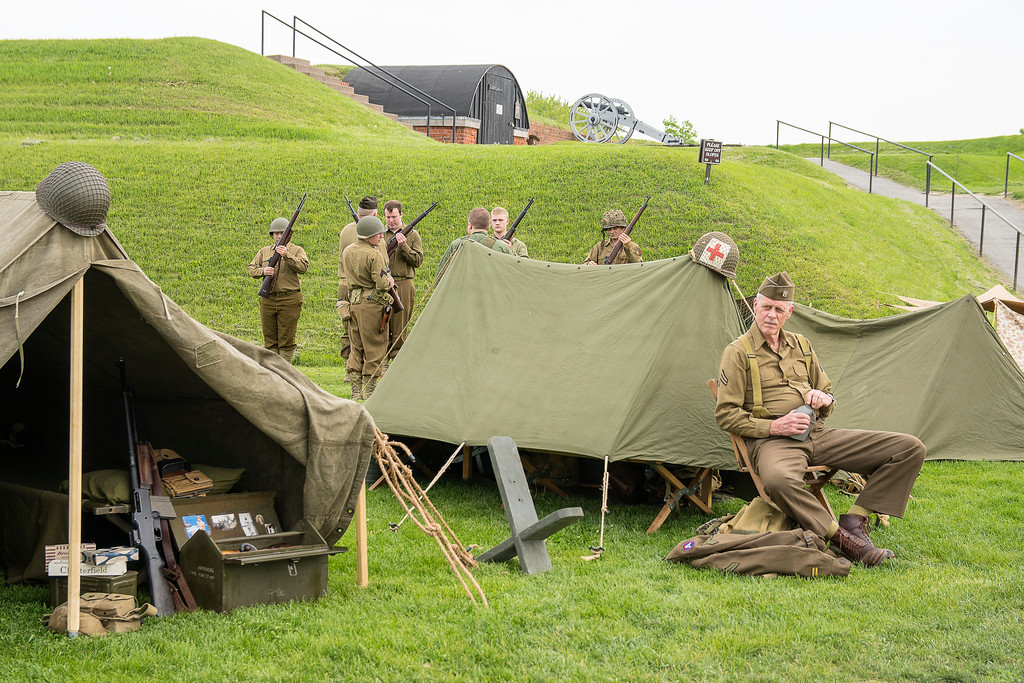