Kicking off the first of the month is Mat Kearney, a melody-driven singer-songwriter known for creating music that's both cerebral and visceral. As a Platinum-selling, boundary-breaking artist, he's toured the world combining classic songs with a modern, heavy-beat. With his thoughtful and moving lyrics, he will play top hits on Aug. 1 such as “Ships in the Night,” “Kings & Queens,” “Closer to Love” and “Breathe In Breathe Out.”

Up next, relive the very best of the '60s and '70s with “Solid Gold Motown” from Aug. 8-15. Journey through the heart of Motown with music from The Temptations, The Four Tops, The Supremes, Stevie Wonder, Smokey Robinson & The Miracles, Gladys Knight & The Pips, Marvin Gaye and Lionel Richie. This show promises to be vibrant and colorful, bringing to life the very essence and feel of the signature upbeat, pop-influenced, rhythm and blues sound.

The journey down memory lane doesn't end there! For two nights only, Rock and Roll Hall of Fame inductee Bill Medley brings back The Righteous Brothers with his partner, Bucky Heard, on Aug. 16-17. Performing hits such as “Lovin' Feelin,' ” “Soul & Inspiration,” “The Time of My Life” and “Unchained Melody,” this duo promises a night of "blue-eyed soul"-inspired music.

Then it's time for bell bottoms and sequins as disco hits the stage on Aug. 22-23 with KC & The Sunshine Band. “Shake Your Booty” to the R&B, funk rhythms of this Grammy Award-winning group, as they entertain audience members with popular tunes such as “Get Down Tonight,” “That's the Way (I Like It),” “Boogie Shoes,” “Rock Your Baby,” “Where is the Love” and “Give It Up.”

On Aug. 24, grab those cowboy hats and join LOCASH for a night of country music. Known for creating a sound that fuses modern country and classic heartland rock with an edgy vocal blend, this dynamic duo, featuring singer-songwriters Chris Lucas and Preston Brust, will showcase their talent by rocking out to chart-topping songs. Fans can expect “I Love This Life” and “I Know Somebody.”

Ending the month on the right note is Nile Rodgers & CHIC, on Aug. 29 and 30. The legendary, Grammy Award-winning composer, producer, arranger and guitarist has successfully expanded the boundaries of popular music by constantly traversing new musical terrain. As the co-founder of CHIC, Rodgers has pioneered a musical language that's generated memorable hits such as “Le Freak,” “Good Times” and “Everybody Dance.”

"It's always exciting to be able to offer a variety of musical genres at Fallsview," said Cathy Price, vice president of marketing at Niagara Casinos. "Whether you're looking to get groovy with a little disco, pull out your cowboy boots with LOCASH or reminisce with The Righteous Brothers, August means excitement at Fallsview." 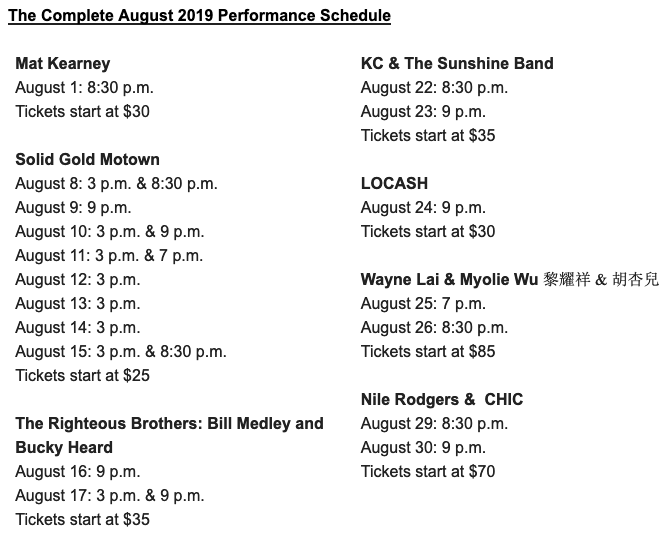