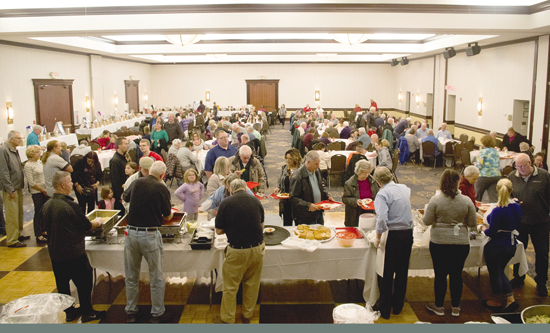 Hundreds of supporters of the Grand Island Lions Club were lined up for pasta and to support the club’s Special Kids Picnic for children with special needs.

One Lion estimated the line as 50 diners long an hour into the event, which ran from 5-8 p.m. Monday in the Radisson Grand Island ballroom.

“This just reminds me of the early ‘90s, late ‘80s, where we would have this kind of an early hit and it would just stay steady throughout,” said longtime dinner chairman Lion Dick Crawford of the big crowd. He said the Radisson Grand Island ballroom room is set up for 280 diners, “So we’re getting close to that. ... With the room being as full as it is, we’ll probably go through 300 dinners.”

Money raised by the spaghetti dinner funds the Grand Island Lions Club’s Special Kids Picnic, which is July 17 at the Buffalo Launch Club.

Crawford added, “We’ve been so blessed by the community that attends it every year, and the wonderful vendors in this town. Every business that our people go to donates something. Then at the end of the year, when we have the Special Kids Picnic, you can see what this helps pay for.”

“We get a very good donation from Tops to buy the food,” Crawford said. “They’re our major corporate sponsor, and have been for over 50 years this has been going on.”

Crawford said the club benefits from having corporate sponsorship from the Radisson and the Buffalo Launch Club “that help us run our programs.” 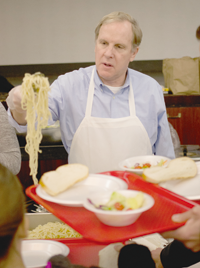