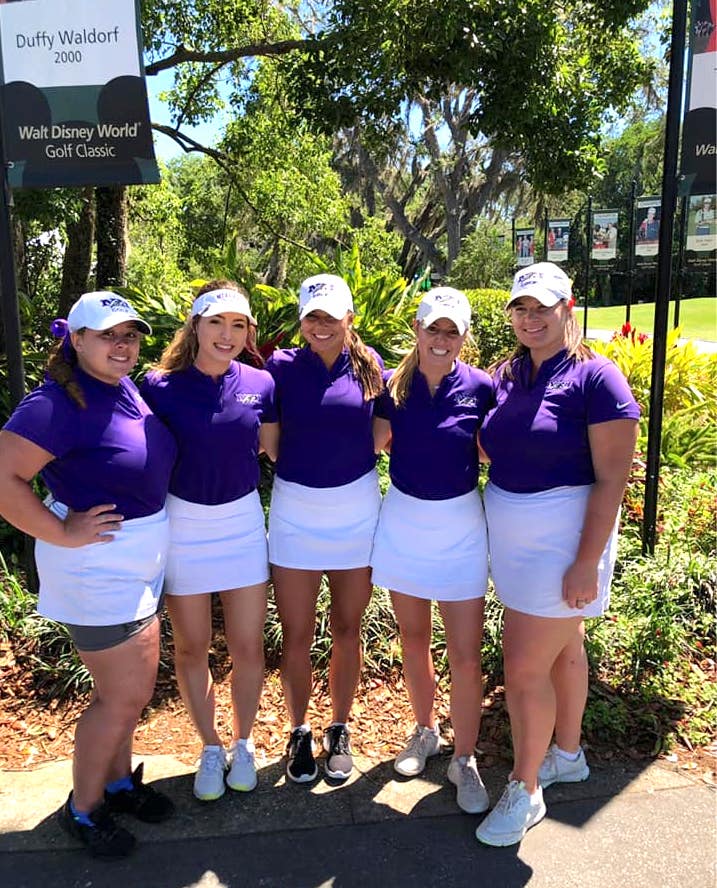 For many people, golf is just a sport one does for fun all the way into retirement. But for these ladies, they’ve been perfecting the game their whole lives.

Recently, Niagara University’s Division I women’s golf team had their coach, Jason Polka, resign in late-February due to an amazing job opportunity he just couldn’t turn down. What job might that be? Only the tournament manager at PGA TPC Sawgrass in Florida where it hosted The Players Championship this year.

Midseason the team desperately needed a new coach before their season began, and Jim LaBuda stepped up to the tee box. Little did the team know, LaBuda was everything they needed and more.

“Getting a new coach was tough, but I saw it as a positive thing. He was definitely ready for the challenge and we quickly adapted to him. He fit in well, and led us to do well individually and as a team,” Sydney Shaw said, a senior who plays for NU.

The team was only able to have a few practices with the new coach before their tournament season began in the beginning of April. Having a new coach so late in the season meant the team had to trust and believe in LaBuda quickly. For LaBuda, he needed to get to know the girl’s swings and use his time wisely.

“I just wanted to be able to give the team as much preparation as possible before the MAACs,” LaBuda said.

With Niagara’s location in Western New York, it didn’t make for a great place for the girls to practice. All semester they resorted to hitting golf balls on mats inside the Paddock Chevrolet Golf Dome; only a few times were they able to chip and putt on grass at their home course Niagara Falls Country Club. Other schools in their conference were able to play much more tournaments before the conference and travel south for spring break.

Only two tournaments in Philadelphia and Youngstown were the girls able to experience full rounds of golf before heading to Disney’s Magnolia Golf Course to compete in the Metro Atlantic Athletic Conference (MAAC) championship.

“Magnolia requires some good tee shots, and is all about placement. Also, there are tough greens with tough pin placements,” Shaw said.

The spring championship is where teams are able to test their ability and endurance to see where they place among other schools. The conference consists of 54 holes over the course of three days with a total of nine teams.

Teams with the earliest tee times warm-up on the range with the help of stadium lights, so they can see part of their ball flight. By the end of the range warm-up one can witness the sun rise, and just before tee time, experience the cool morning air before the Florida heat rushes in.

Earlier in the season on Feb. 2, a preseason poll  was released predicting where each team were deemed to finish. Niagara University was predicted to place last in the MAAC tournament. It wasn’t the news the team was hoping for, but it gave them motivation to prove the poll wrong which then brought their success.

This being the new coach’s first championship, LaBuda said his main focus was, “Keeping the team on track and not letting a bad shot ruin a whole round. Each player has their own individual strengths, and I hoped to be able to build on those during the course of the rounds to stay positive for success.”

Susan Leone, a freshman on the team and her first MAAC championship, said, “I expect for myself to shoot consistent and put up some good scores. By doing this it will help our team improve. I feel we can win MAACs if we all shave off a few strokes each.”

Scoring in tournaments is done by only counting the four best scores out of five players. In the first round, the Purple Eagles were matched with La Salle and Monmouth, and placed sixth after firing a total day score of 330.

LaBuda reminded the team, “You can’t win it on the first day, but you can shoot yourselves out of it.”

The second round, tee times were pushed back a half hour earlier to accommodate thunderstorms in the afternoon. The winds were stronger than the day before making the course longer, hitting into the wind on some holes caused the girls to have to go up a club or two. It made a huge difference in scores, but it affected all of the teams.

In NU’s second round, the girls played against Hartford and Siena, and scored a total of 336 only 10 strokes away from fifth place. Still the girls didn’t “shoot themselves out of it” as LaBuda said.

He also mentioned, “My goals going into the final round were that the team just did their best and had fun.”

The final round would be the senior’s last college tournament ever.

Shaw commented, “It is bittersweet being a senior and finishing my last match. I have to look back and smile though all of the positive memories we have made as a team.”

Over the course of the day, Niagara began to make up some strokes and Hartford made heavy mistakes. It was a close battle for fifth place as the girls were running out of holes to play, but Niagara remained strong.

After the girls signed and turned in their scorecards, they would make their way to the eighteenth green to support and watch the last few putts of their teammates. A shot into the water, a single putt or three could make it or break it for the team’s placement.

Once the last putt dropped for the final group with Niagara, it was determined Niagara tied for fifth place with Hartford with a three day total score of 994.

Niagara made up ten strokes in a single day to share fifth place, the best finish the girl’s team has ever done since the program began. It is even more remarkable that the team finished their best with a coach they’ve only had for a couple months.

LaBuda said, “It was just a wonderful experience overall. It was a pleasure working with such a great group. It was nice to see everyone excited when they tied for fifth place. It was an achievement to be proud of.

“As your players strive to enhance their skills and become better golfers with your assistance, its rewarding on a personal level to see their success. When the team succeeds, that means I have succeeded as a Coach. It’s a great feeling!” 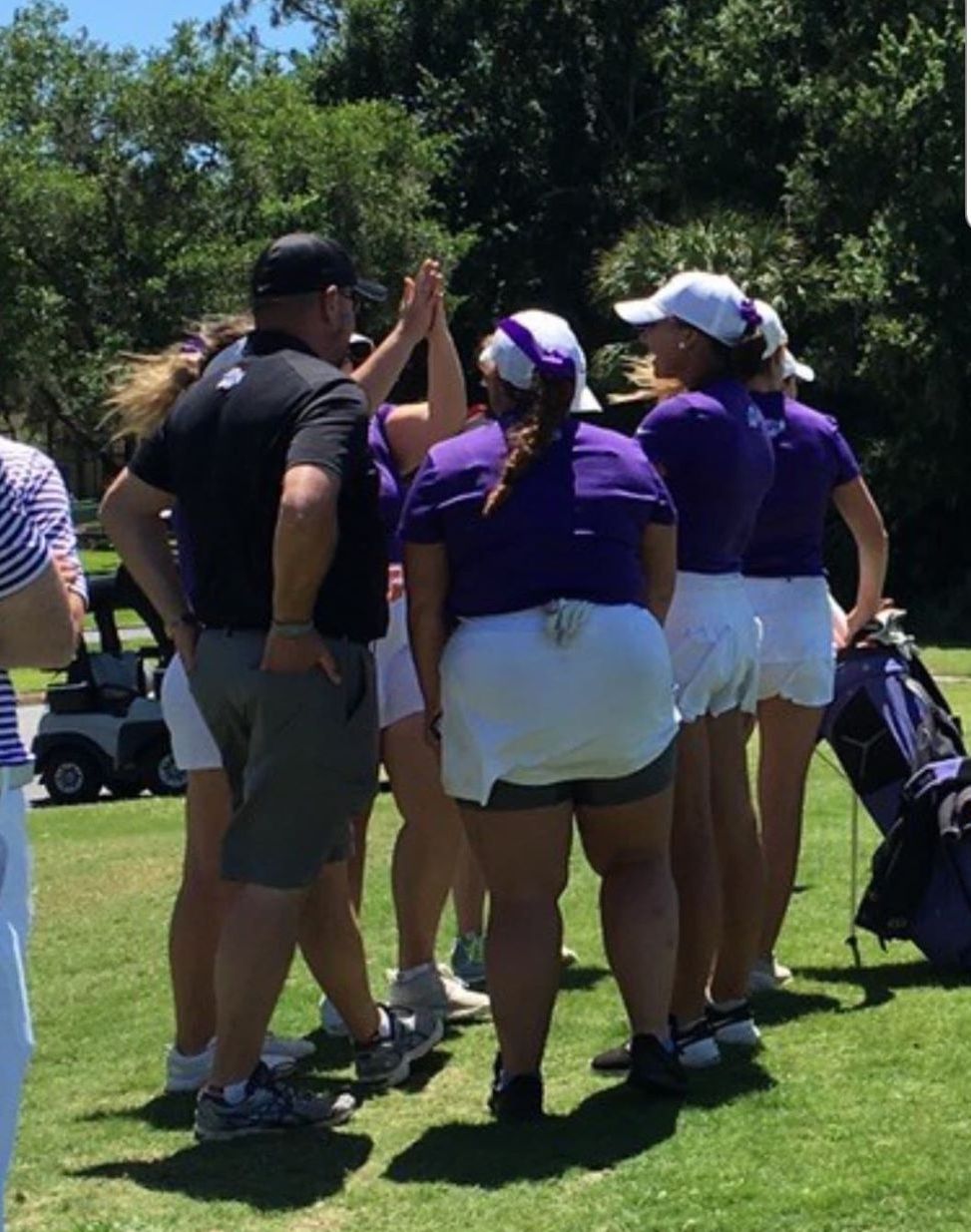 Coach LaBuda and the team huddle by the eighteenth green after the round, ecstatic about their finish.

In 2012 , the girl’s team finished fifth, but only had a total of six teams competing at the time.

Niagara was also the only team where every player who isn’t a freshman, received the All-Academic Team award for completing two semesters with a cumulative GPA of 3.2 or higher.

Now that Niagara’s women’s golf team has placed fifth, they have more confidence in their ability to play even better in the future.

Leone, who will come back to play Magnolia three more times in her college career, said, “MAACs was definitely an experience I will never forget on the golf course and off. I have made so many memories, and I feel now that I have played in MAACs, I can take some tips from this year to better my future-self.”

LaBuda noted, “Each player had their own individual strengths and weaknesses. I saw some really good drives and putting from each player. I think the biggest weakness everyone had is that there were very long days and that took the toll on everyone’s physical well being.”

Golf is a marathon. The players aren’t able in ride in golf carts, but must push or carry their own bag for eighteen holes that could last five hours long. Florida weather is hot and dry, making the ground hard and one’s feet to swell and cause blisters. It’s the opposite of what Niagara experiences at home, the ground is softer and the air much cooler.

After this year, the Niagara team will lose three seniors, leaving four strong returning veterans behind.

Coach LaBuda concluded, “The team will have some outgoing seniors and new freshman next year. My goal is to acclimate the freshman to the existing team and give assistance where needed. I would of course love for the team to be number one next year but no matter where the team places, as long as they did their best and had fun that is OK with me. I am grateful to have this opportunity to be part of a team and I hope for continued success.”

To see the full MAAC results go to: http://results.golfstat.com/public/leaderboards/gsnav.cfm?pg=teamPlayer&tid=17362.

•••••
Niagara Frontier Publications works with the Niagara University Communication Studies Department to publish the capstone work of students in CMS 120A-B.
These articles do not necessarily reflect the opinions or beliefs of NFP, NU or the communication studies department.
Comments can be sent to the NFP editorial department, care of the managing editor.
Categories
NUsUnlimited NUsUnlimited Top Feature