Two outs, man on first. The count is two and two. The pitch comes and the runner goes. The catcher throws down to second and guns the runner out. POP! He feels something in his elbow snap.

“It felt like someone ripped off my elbow. My fingers went numb and I had no control of my arm,” Matt Zaremba recalled.

On June 3, 2018, Zaremba was playing in his home opener of his summer baseball season when he completely tore the UCL in his elbow. The 5’10”, 160-pounder walks off the field and immediately has the trainer look at his arm.

“The trainer told me it didn’t look good and the test was positive. He told me to go home and get a second opinion because he thought it was torn,” Zaremba said.

For Zaremba, baseball was life. He had been playing since he was just 4 years old. He worked hard at St. Francis DeSales High School in Columbus, Ohio, to eventually receive a scholarship to play college baseball at Niagara University.

“I simply fell in love with the game ever since I was young. I never wanted to stop playing. I knew I was good, but my dreams were to play at the collegiate level, knowing that college baseball would develop me into the best player possible,” Zaremba said.

Zaremba didn’t have the easiest path, playing baseball at Niagara. He had been healthy his entire life until he got to college. His freshman year he suffered from a broken hand followed by a completely broken nose his sophomore season. His junior year was his time to shine. He was fully recovered and back better than ever. He worked hard all summer and fall to get back to full strength. It was his time.

Zaremba never saw injuries as something that would stop him from doing what he loves until he got the news he needed Tommy John surgery. This surgery typically requires a full 14 months of recovery and some athletes never truly come back from it. In fact, Zaremba was diagnosed with a full tear, which would require him to completely miss his entire junior season.

“I was devastated knowing the severity of the injury but hearing all the people doubt my comeback, I knew I wanted to prove them wrong,” Zaremba said.

Zaremba was determined to not only be in the 80% of athletes who do recover from this surgery but be in the 20% who come back better than they were before. When people would shake their heads and tell him “good luck with that” it only motivated him more.

“I knew I had an advantage with my recovery. I’m a catcher. I have to make fewer harder throws than a pitcher does. I didn’t get an opportunity to be myself and play in many games my first two years. I wasn't going to let this get in the way. I knew I would be back,” Zaremba said.

Tommy John Surgery has plenty of risks. Some athletes never throw again, or come back to their full strength.

On June 20, Zaremba headed into the operating room at Ortho Neuro Surgical Center in New Albany. His doctor was one of the best in the country with this type of procedure. He wanted to try using an artificial ligament in Zaremba’s elbow which would typically speed up the healing process. Zaremba was willing to do anything he had to do. In the operating room, he was accompanied by his dad, Joe, and sister, Amelia. Having the support from his family meant the world to him.

“Knowing my family supported me with my recovery meant everything to me. They were the ones keeping my spirits high when I would sometimes doubt myself,” Zaremba said.

“I prayed for a successful surgery so that Matt could finally be healthy to showcase his talents for a game that he loved so much,” his father, Joe, said.

Just a few hours later, Zaremba’s surgery was complete and it couldn’t have gone any better. It was successful.

His complete recovery was scheduled for August the following year. 14 months seemed like forever. Zaremba knew he had to take this recovery process little by little. 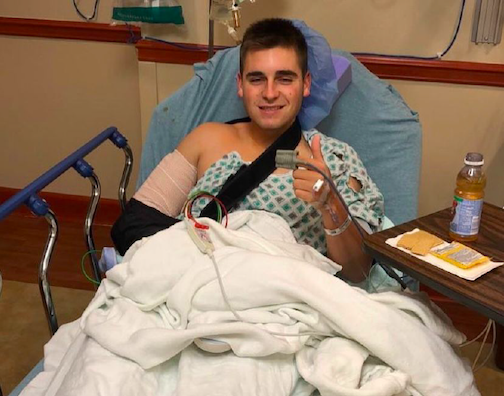 Zaremba in the recovery room post-surgery on June 20.

By August 20 he was supposed to be able to fully straighten his arm. Four weeks post-surgery, Zaremba received a brace that extended from his wrist all the way up to his shoulder. He felt bionic, but also trapped. He barely had any range of motion.

“My biggest struggles with wearing the brace were taking it on and off, getting dressed and eating. Basically I realized how I took how easy, everyday life things for granted,” Zaremba said.

He became frustrated often but had to remind himself of the process and what his end goal was, playing his junior season. After a few short weeks, he noticed his range of motion was getting better. His scar was beginning to heal, he could bend toward his face easier and he could even start using his right hand to lift light things again. This was a positive sign.

Next, he was allowed to begin physical therapy and rehab. This excited Zaremba. It was the first time he felt like himself again. He was able to somewhat use his arm.

“Usually people dread rehab. For me, it was one step closer to getting back on the field. In fact, I looked forward to strengthening my arm,” Zaremba said.

He spent the rest of his summer completing sessions of rehab while watching his friends play summer ball. This crushed him. He would go to games and practices to watch, and every other person would comment about his enormous brace. They would mention things about redshirting or say how awful they felt that he would miss his junior year.

All of the doubt and pity fueled Zaremba during his rehab process. He hated that people felt sorry for him. After all, he didn’t even feel sorry for himself, why should others?

Finally the fall came and Niagara baseball was starting back up. His coaches and trainers encouraged him to redshirt, (sit out an entire season due to injury), so he would not have to miss a year of baseball. Zaremba refused.

“There was NO shot at me redshirting. I wanted to prove people wrong. Besides, I didn’t have to make a decision if I was going to redshirt until 10 games into my season. It was worth it to wait it out and see,” Zaremba said.

Month after month, Zaremba had to check in with his doctor in Ohio all the way from Niagara Falls. This was difficult. He couldn’t just leave school and drive five hours for an appointment. They would speak over the phone.

“I was frustrated that I couldn’t get home for my appointments. I felt like this made my doctor slow down with all of his decisions,” Zaremba said.

His doctor couldn’t give him any concrete answers about moving on in his recovery process because he physically could not evaluate him. This forced Zaremba to experiment with his elbow himself. He understood the risk of re-injuring his elbow, but he needed to find out one way or another if he was making any progress.

“I would go to practice and flip the balls underhand to a teammate. I didn’t feel any pain so I would increase the amount of flips every few days. Eventually, I felt enough strength to begin catching again,” Zaremba said. 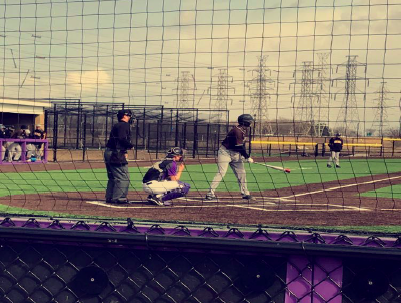 He would be in the weight room with strength and conditioning coach, Matt Wietlispach, every single day. Whether he was rehabbing, doing bandwork, or lifting lightly, he was building up strength in his elbow.

“I knew there wasn’t much that I was allowed to do, but I read online that if you stay in great shape physically, it can help speed up your recovery process,” Zaremba said.

(For workouts to do while recovering from Tommy John surgery please visit https://www.stack.com/a/tommy-john-surgery-workout)

This inspired him to stay in the best shape of his life. He was getting in extra cardio throughout the week on top of his lifts, rehab and rest periods. He truly believed that everyday he wasn’t working to get better, someone else was, even if he was injured. He always reminded himself that people were expecting him to miss this season, or maybe not ever come back.

Jan. 24 was the first practice of the season for the Purple Eagles and Zaremba found himself cheering on his teammates from the dugout. He would continue with his daily rehab routines to strengthen his arm but it wasn’t enough… yet.

“Watching practice from the dugout and seeing your best friends prepare for the season you’ve been working so hard for is tough. Yes, you’re rooting for every single one of them, but, at the same time, you can’t help but wish you were in their place,” Zaremba said.

He was able to participate in practice by catching bullpens. This didn’t require any throwing or running. All he had to do was catch the ball and flip it back to the pitcher.

“I love catching these guys, but after weeks of just catching pens, it gets old real fast. I wanted in on the real action. I couldn’t wait much longer. I knew I would be ready soon,” Zaremba said.

Eventually, the season started and Zaremba was not cleared to fully participate in games but he didn’t lose hope. In fact, he was determined more than ever. Zaremba decided it was time he tried to throw.

“I knew there was risk getting hurt, but there’s always a risk of getting hurt. You can’t think about that, not when you’re trying to achieve something that hasn’t happened before,” Zaremba said.

He felt no pain when he would throw. In fact, he almost felt normal. He knew he wasn’t 100%, but it was pretty close. This was enough for him. He called his doctor and explained his situation. Luckily, his doctor trusted Zaremba and his process. He cleared him over the phone.

Not only was he cleared to play again, but he was cleared six months early. 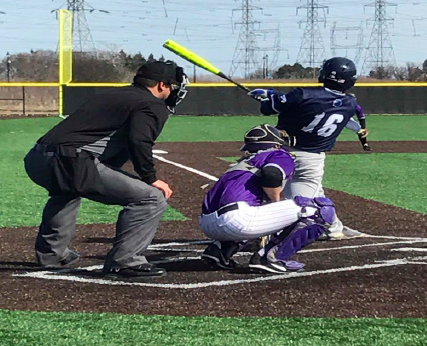 Zaremba behind the plate at Niagara University.

Shortly after being cleared, Zaremba found himself walking up to shake the umpire’s hand in his first start of his junior season. He has been playing ever since.

Not only has he been excelling but he has been throwing harder and more accurate than ever. Zaremba is batting .250 and has thrown out three runners on nine attempts stealing.

“It’s all about trusting the process and believing in hard work. You also have to know your body. Tommy John surgery didn’t stop me, it shouldn’t stop anyone else,” Zaremba said.

•For a complete list of statistics for Niagara baseball, visit https://purpleeagles.com/documents/2019/4/20//OverallStats.pdf?id=6690

•For more information about this surgery, visit http://www.childrenshospital.org/conditions-and-treatments/treatments/tommy-john-surgery/in-depth

•For more information about the rehabilitation process for Tommy John surgery, visit

•For workouts to do while recovering from Tommy John surgery, visit https://www.stack.com/a/tommy-john-surgery-workout

•••••
Niagara Frontier Publications works with the Niagara University Communication Studies Department to publish the capstone work of students in CMS 120A-B.
These articles do not necessarily reflect the opinions or beliefs of NFP, NU or the communication studies department.
Comments can be sent to the NFP editorial department, care of the managing editor.
Categories
NUsUnlimited NUsUnlimited Side Story NUsUnlimited Top Feature