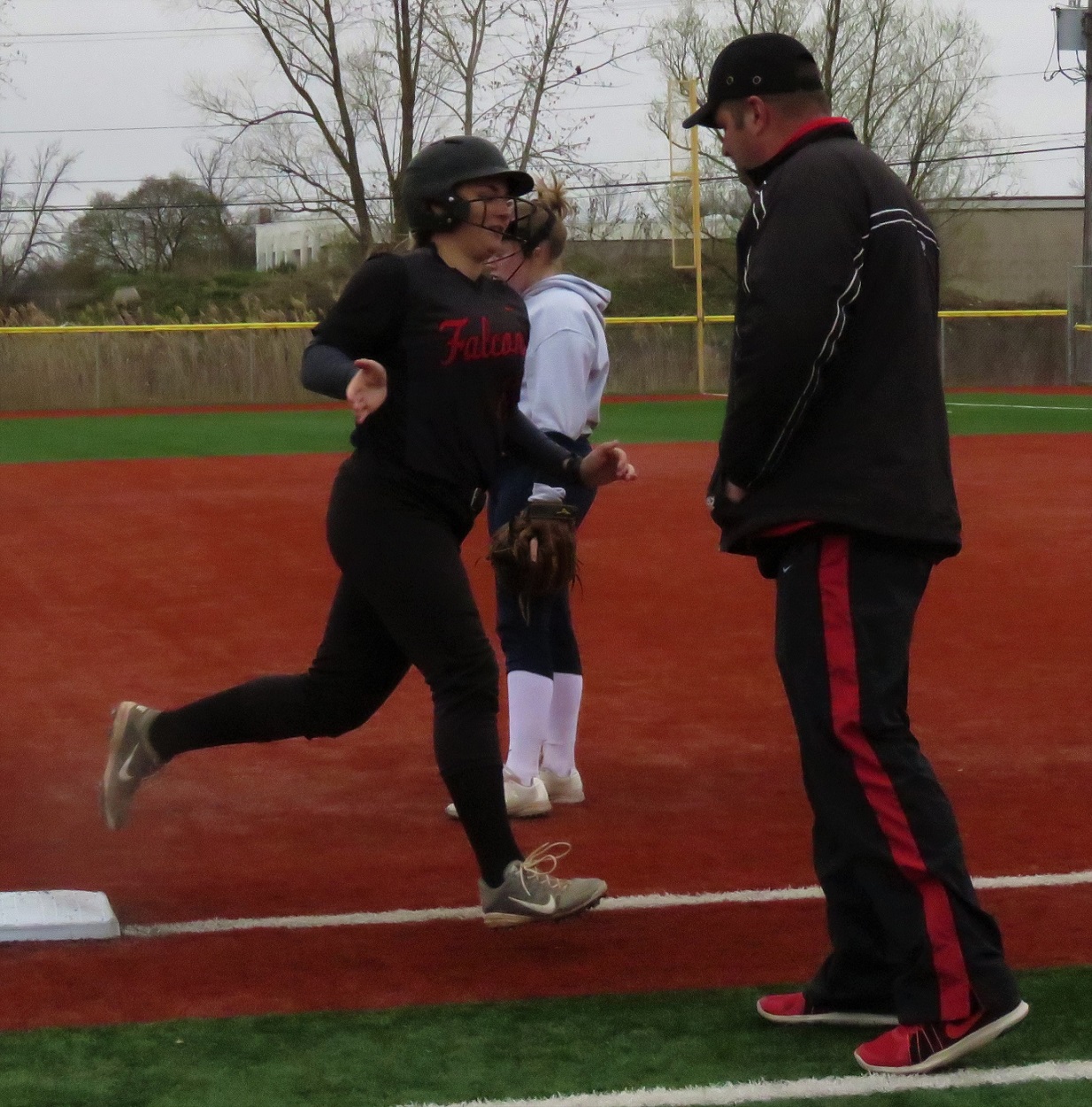 The game was the Falcons’ first since an eight-day trip to Florida. After finishing 7-1 down south, the team didn’t bring Florida heat back with them. Despite that, the Falcons were able to stay red hot in Niagara Frontier League play and extend its record to 5-0.

Senior captain Maddie Evarts got things rolling for N-W on the second pitch of the game, as she sent her first home run of the season over the left field fence.

Starting pitcher Mackenzie Quider held the Falls bats in check for the first three innings, striking out four batters and giving up no runs.

In the bottom of the third innings, second baseman Corin Loughrey led off with a double off the left field fence. Senior captain Mackenzie Franks followed Loughrey with a triple to right field, and later scored on a single by freshman Elanna Lysiak. After three innings, the Falcons led, 3-0.

The Falcons had trouble defensively in the fourth inning.

After two Quider strikeouts, back-to-back NF hitters reached via an error in the infield.

Emaleigh Cooper scored the Wolverines first run on a passed ball. Following a walk to leadoff hitter Abbey Roeser, Avi Peterson drilled her third hit of the day into the left-centerfield gap for a bases clearing double. Peterson was thrown out at third attempting to advance on the throw home, but, nonetheless, the hit gave the Wolverines a 4-3 lead.

N-W answered in the top of the fifth, as Quider sent a solo home run to left-center, tying things up at four.

Following consecutive singles by Lysiak and Jenna Bailey, Lauren Vickers poked an RBI single to give the Falcons a 5-4 lead.

The Falls answered in the bottom half of the inning, though – once again with two outs.

Jordan Dixon singled and advanced to second on a wild pitch. The next batter, Kaylee Griffith, laced a triple to left-centerfield to score Dixon. Cooper then doubled to score Griffith, giving the Wolverines the lead, 6-5.

Six is all the Falls would get, though, as the Falcons would answer once again.

In the top half of the sixth inning, N-W broke out for six runs to open up the game.

After a Loughrey walk with one out, Franks roped a two-run blast to right-center, giving N-W the lead back, 7-6.

After a Quider single and walks by Bailey and Abby Metzger, Vickers laced a triple into the left-centerfield gap to clear the bases. Vickers trotted home a couple pitches later on a wild pitch.

In the top of the seventh, the Falcons added on some insurance runs.

After Evarts led off with a walk, she advanced to third off a sacrifice bunt from Loughrey. Franks then notched her fourth RBI of the day with a sacrifice fly to right.

With the score in N-W’s control, 12-6, Quider added to that with her second home run of the day. The solo blast extended the Falcons’ lead, 13-6.

Following Quider, Lysiak walked and advanced to second base on a wild pitch. Bailey laced a double into right-center to score Lysiak, but Bailey was thrown out at third stretching into a triple.

In the bottom of the seventh, reliever Leah Bailey put the game in the books with a strikeout and two groundouts. The final score was 14-6, Falcons.

For the Falls, Peterson led the way offensively, going 3-4 with three RBIs. Additionally, Griffith was 2-4 with an RBI and a run scored, while Cooper also notched an RBI and run scored.

After spending some time in the warm sun of Florida, Falcons coach Jim Proefrock said he was happy to see his offense stay hot despite returning to winter-like temperatures.

“It’s great to see just because I know that’s exactly what they’re capable of. That’s a very potent lineup. This one could’ve gone either way; it could’ve gotten away from us. I’m just glad that it didn’t,” Proefrock said.

Proefrock added the team must tighten up defensively, as four errors, including two in the fourth inning, could’ve came back to bite.

“The bats bailed us out this time. … It was nice; some timely hits, good baserunning. We just have to tighten up on D a little bit,” Proefrock said.

While in Florida, the Falcons played more games than they had back home. While other teams might not have had the luxury of traveling down south for better weather and more games, the Falcons were able to use the trip to its advantage.

“We got to try some new things down there; experiment with some things and see what worked; know our strengths and know our weaknesses,” Proefrock said. “Florida definitely helps. Anytime you can get down there and play, get on the diamond and get the feel for it, it’s going to help and bring back a lot of things. I think we learned a lot more about our team, and the girls learned a lot more about themselves and exactly what this team is capable of doing.”

The Falcons are at home to face Kenmore East at 4:45 p.m. Tuesday.