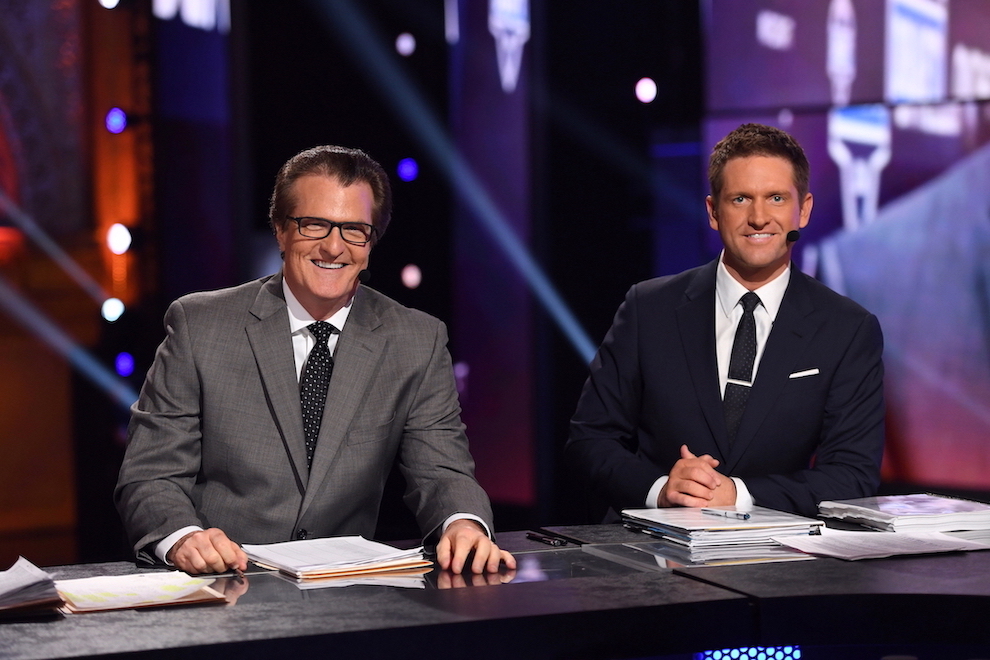 The Walt Disney Company’s presentation of the 2019 NFL Draft will offer more to fans than ever before as the entire event, April 25-27, will air on both ESPN and ABC, and each network will provide distinct telecasts for rounds 1-3 in primetime. Additionally, all seven rounds of the draft will be streamed live on the ABC App, ESPN App, broadcast on ESPN Radio and available in Spanish – on both TV and radio – on ESPN Deportes. The NFL Network will also televise the 2019 NFL Draft.

ESPN and ABC NFL Draft productions by the numbers:

ABC’s differentiated coverage for rounds 1-3, which will focus on the journey of NFL Draft prospects, features “Good Morning America’s” Robin Roberts (round 1) and the eight-time Sports Emmy Award-winning “College GameDay Built by The Home Depot” crew of host Rece Davis, analysts Kirk Herbstreit, Lee Corso, Desmond Howard and David Pollack, and reporters Tom Rinaldi and Maria Taylor, and contributor Chris “The Bear” Fallica. Plus, the “2019 NFL Draft on ABC” will include ESPN’s Jesse Palmer and special guest NFL MVP Patrick Mahomes (prior to round 1).

“American Idol” judge Luke Bryan and mentor Bobby Bones will appear on ABC’s primetime draft coverage. Bryan will join the “GameDay” crew on night one, while Bones will serve as a roving reporter from the streets of Nashville on both nights, sharing the enthusiasm of the city, fans’ passion and a behind-the-scenes look of the NFL Draft for viewers at home. ABC will simulcast ESPN’s day 3 telecast of rounds 4-7.

All seven rounds of the 2019 NFL Draft will also be streamed live on both the ABC App and the ESPN App.

“Golic and Wingo”: “Golic and Wingo” on ESPN Radio from 6-10 a.m. – with simulcasts on ESPN2 and ESPNEWS – will be live from the West Club at Nissan Stadium on April 25-26. Mike Golic and Mike Golic Jr. will be joined both days by host Jason Fitz and a full slate of guests. The broadcasts are open to the public with doors opening at 4:30 a.m. CDT.

“Get Up!”: Host Mike Greenberg and the team from “Get Up!” will be live from Rock Bottom Restaurant and Brewery, located next to the stage where the draft picks will be announced, on April 25-26 from 8-10 a.m. on ESPN. This will be the first time the popular morning show hosts an entire show from a remote location.

“First Take”: ESPN’s popular morning debate show “First Take” will be live from the West Club at Nissan Stadium on April 25-26 from 10 a.m. to noon. Stephen A. Smith and Max Kellerman will be joined by host Will Cain. Both shows – which will feature a full lineup of NFL and other celebrity guests such as Eddie George, Tim McGraw and ESPN’s Desmond Howard and David Pollack, as well as free giveaways – will be open to the public with doors opening at 7:30 a.m. CDT.

“Stephen A. Smith Show”: The “Stephen A. Smith Show” on ESPN Radio and simulcast on ESPNEWS will be live from the West Club at Nissan Stadium on April 25-26 from 1-3p.m. The shows will include previews, reaction and analysis from host Smith on all the latest NFL Draft news from Nashville.

ESPN.com: ESPN.com’s coverage of the 2019 NFL Draft will focus on signature voices Kiper, McShay, Riddick, Herbstreit, Mike Sando and others. Highlights include NFL mock drafts paired with “SportsCenter Specials,” pros and cons on every first-round draft pick from NFL Nation, plus Draft Day analysis from “NFL Nation” on all 254 picks and real-time data via DraftCast.

Following the 2019 NFL Draft, ESPN will release Kiper’s draft grades (the foundation for “SportsCenter Special: Draft Grades” on April 28) and “Early Impact” rookies (April 30), as well as McShay’s best picks for all 32 teams (April 27). Additionally, “NFL Nation” will break down the biggest post-draft questions for all 32 teams (April 29), and McShay will look ahead to next year with a “Way-Too-Early 2020 Mock Draft” (May 2).

ESPN The Magazine: On the cover of ESPN The Magazine’s NEXT issue is Nick Bosa, the NFL draft’s most disruptive force of nature. Senior writer Kevin Van Valkenburg’s cover story reveals how painful it was for Bosa to sit out last year at Ohio State – and how hungry he is to start sacking again. The issue also features “Beyond Measure,” senior writer Tim Keown’s look at Kyler Murray’s sizable expectations, including going No. 1 in the draft, becoming a franchise player and completely blowing up decades of doctrine about short quarterbacks.

ESPN Marketing: Tin Roof, located in the heart of downtown Nashville, will transform into the ESPN House during the NFL Draft. In addition to serving as a viewing party for fans, attendees will also be able to experience the football player journey at ESPN – from “College GameDay” to the NFL Draft, and ultimately to “SportsCenter” and “Monday Night Football.”

SEC Network: SEC Network will air an hour-long “SEC Now: Draft Special,” breaking down all stats and storylines behind the stars of SEC football as they prepare for the next step in their playing careers. Debuting April 24 at 2 p.m., the show features SEC Network college football analysts Matt Stinchcomb, who will serve as host, Gene Chizik and Matt Bowen.

ESPNLA 710: ESPNLA 710 will broadcast an NFL Draft Special with Jorge Sedano, Keyshawn Johnson and former NFL linebacker Kirk Morrison on April 25 from 6-10 p.m. The broadcast will provide a pick-by-pick breakdown, followed by ESPN Radio’s national coverage of the NFL Draft.

ESPN International: This year, ESPN International will cover the NFL Draft with its most robust content plan to date, offering live television coverage of the NFL Draft to more than 31 million households in 61 countries and territories throughout Spanish-speaking Latin America, Brazil, the Caribbean, Australia, New Zealand, the Pacific Islands and Canada (on TSN).