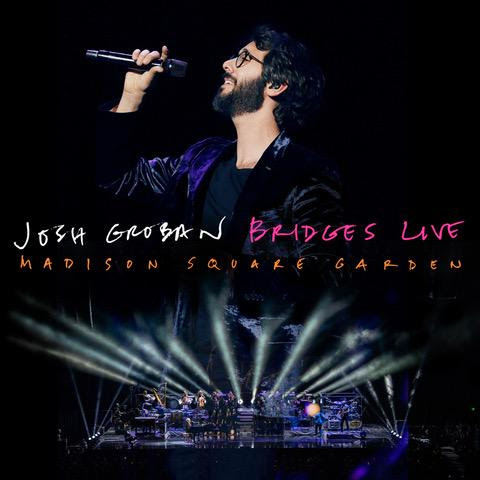 Relive all of the exciting, tear-jerking and even comedic moments from the show, shot by famed director Joe Thomas and recorded live from the final U.S. stop of his sold-out 2018 “Bridges Tour” at the iconic Madison Square Garden. The show includes a mixture of new songs and classic hits as well as duets with Tony-Award winning, multi-Platinum recording artist Idina Menzel along with a special appearance by Sugarland's Jennifer Nettles.

The live set features Groban’s band accompanied by a choir and orchestra and kicks off with "Bigger Than Us" from his newest studio album, “Bridges.” Followed by the 2008 hit "You Are Loved (Don't Give Up)" and another new track, "Won't Look Back," Groban performs a mix of beloved classics, new songs and special covers, including the standard "Pure Imagination," Billy Joel's "She's Always A Woman," and "Bring Him Home" from “Les Misérables.” Menzel joins Groban for two duets, including the angelic "Lullaby" and the emotionally charged "Falling Slowly" from the movie “Once.” At this performance, Groban was also joined on stage by songstress Nettles for a duet of "99 Years" before he closed his set with a rendition of Simon and Garfunkel's "Bridge Over Troubled Water."

Watch the duet of "99 Years" with Nettles HERE, and the performance of "Bridge Over Troubled Water" HERE.

The accompanying live CD will feature fan favorites from the DVD and will also include a special, brand-new bonus track, "She Moved Through the Fair," recorded live from Dublin on the world tour.

Groban will head out on the second leg of his “Bridges” Tour this summer with special guests singer-songwriter Nettles and critically acclaimed instrumentalist Chris Botti joining him on select dates. Tickets for the summer tour are on sale now; visit JoshGroban.com for a full list of dates and more information.

Earlier this month, it was announced Groban will join Celine Dion's first ever headlining show in the Royal Park on July 5 with support from Claire Richards, as a part of “British Summer Time.” Tickets are available now HERE.