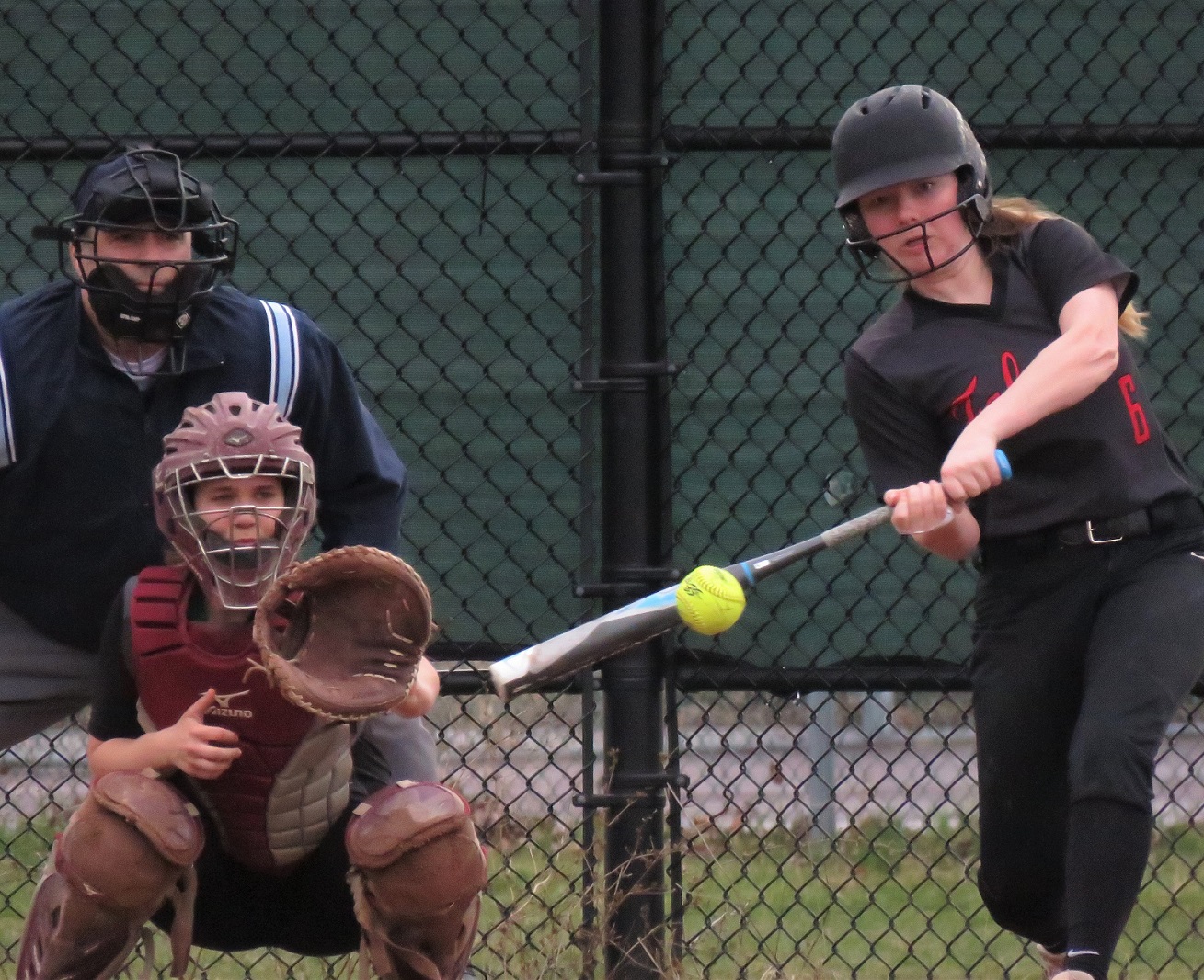 Niagara-Wheatfield Falcons catcher Sydney Crangle ropes a game-tying double to score two runs in the bottom of the fourth inning during a 5-4 victory over Lewiston-Porter. (Photo by David Yarger)

Friday evening could possibly end up indicating how competitive softball is in the Niagara Frontier League.

The Niagara-Wheatfield Falcons walked it off in nine innings versus the Lewiston-Porter Lancers, 5-4.

In a rare occurrence, the Falcons walked off as winners on Lew-Port’s field, as the game was moved to the Lancers facility around 3:30 p.m.

Batting first on their own diamond, the Lancers grabbed a quick 1-0 lead.

Madison Terrana singled and stole second base. Following two wild pitches, she was in for the game’s first run on the scoreboard.

Lancers starting pitcher was able to keep the Falcons in check through three innings, avoiding a first and third jam in the third frame.

In the second inning for Falcons starting pitcher Maddie Kwitchoff, she avoided a jam of her own after walking the first two batters.

The Lancers struck in the third, though, as Terrana singled, advanced to second base on a wild pitch, then moved to third on a sacrifice bunt from Maggie Waechter.

With one out, Crum hit a sacrifice fly to right field, scoring Terrana from third base to make it 2-0, Lancers.

After a one-two-three fourth inning for Kwitchoff, the Falcons came to bat looking for a spark.

Mackenzie Quider led off with a little poke in the infield, which Crum threw away, leading Quider to second base.

Freshman Elanna Lysiak followed Quider with a single, then advanced to second on fielders indifference.

After a strikeout, Sydney Crangle came up with one out. Crangle gave N-W the spark it needed.

Crangle sent a ball into the left-center field alley to bring Quider and Lysiak home, making it a 2-2 ballgame.

Lew-Port took a 3-2 lead in the top of the fifth, as Waechter nailed an RBI single to score Terrana.

The Falcons showed resiliency, though, as in the bottom half of the fifth, Corin Loughrey singled with one out, then Mackenzie Franks added a base hit to follow. A wild pitch then advanced the two to second and third base.

With one out for Quider, the senior captain laced a ball into center field that was acrobatically caught by Chloe Noah, but scored Loughrey to tie things at three.

Lysiak followed Quider with a single to score Franks and give N-W its first lead, 4-3.

In the top of the seventh inning, with the score still 4-3, Terrana led off with a walk for L-P and Waechter bunted her over to second base.

With one out, the batter was Crum, who ripped a single up the middle to score Terrana and tie the game at four.

Crum held the Falcons in the bottom of the seventh and eighth innings, while Quider got out of two jams in the top of the eighth and ninth innings.

In the bottom of the ninth, leadoff hitter Maddie Evarts led off with a single into center.

Following a strikeout, Evarts stole second to get into scoring position, then advanced to third base on a wild pitch.

With two strikes and Franks up, coach Jim Proefrock decided to roll the dice.

The No. 3 hitter Franks squared to bunt, got it down forcing Crum to flip it home, as a sprinting Evarts slid home safely to execute a suicide squeeze play and give the Falcons the victory, 5-4.

For the Falcons, Quider received the win in the circle after pitching 2 2/3 innings of relief. Kwitchoff threw 4 2/3 innings, striking out seven and allowing three hits.

Offensively, the first three hitters for the Falcons lineup went a combined 7-15 with three runs scored and an RBI (Evarts, 2-5, one run; Loughrey, 2-5, one run; and Franks, 3-5, one run, one RBI). The four and five hitters – Quider and Lysiak – additionally went 1-3 and 2-4, respectively, with an RBI and run scored apiece.

Of the final squeeze play, Proefrock said he figured it would catch the defense napping.

“There’s two strikes, I don’t think they were expecting it and with the No. 3 hitter it’s the least obvious thing to do. It’s almost a guarantee with her (Franks) at the plate. I have that much confidence in Mackenzie to put down that bunt and with Maddie and her speed at third to get that in. Had to go for it,” Proefrock said.

Franks, with a laugh, couldn’t truly recall the last time she bunted for the team, but said she believed the play would work 100 percent.

“If I’m going to do a squeeze bunt, it’s always with Maddie, so I always trust her that she’s going to get there and just trust myself to get it down,” Franks said.

Evarts replied, “I knew she had it.”

The Falcons are now 3-0 this season. The team’s first game versus Niagara Falls was close early, but the team eventually won, 21-10. Friday’s contest was a test and Proefrock said it was a good experience for the girls.

“It was battling back and forth. It was an exciting game. She (Crum) is a great pitcher. I’m just proud that (when) we got down, we came right back and fought back until the end; all the way through nine innings. It’s very impressive and I’m very happy for my girls,” Proefrock said.

Proefrock admitted, defense hasn’t been the Falcons’ strongest to start the season, but it was efficient Friday. Loughrey made several plays at second base, while Evarts made a leaping grab early in centerfield during an errorless game for N-W.

“We’ve had to try to work on it. We’ve scored a lot of runs, but the defense, at times, we have to tighten up on it and I think we did that today,” Proefrock said.

After battling back more than once to eventually win, Proefrock said it was nice to see the team show heart in a comeback.

“It’s great. It shows me; I know physically they can do it, and now they proved how mentally tough they are,” he said.

For the Lancers, Crum received the loss in the circle after hurling 8 2/3 innings, while striking out 11 and walking one batter. Additionally, she went 2-3 offensively with an RBI. The No. 2 hitter Terrana scored all four of the Lancers’ runs while going 3-5 with two stolen bases.