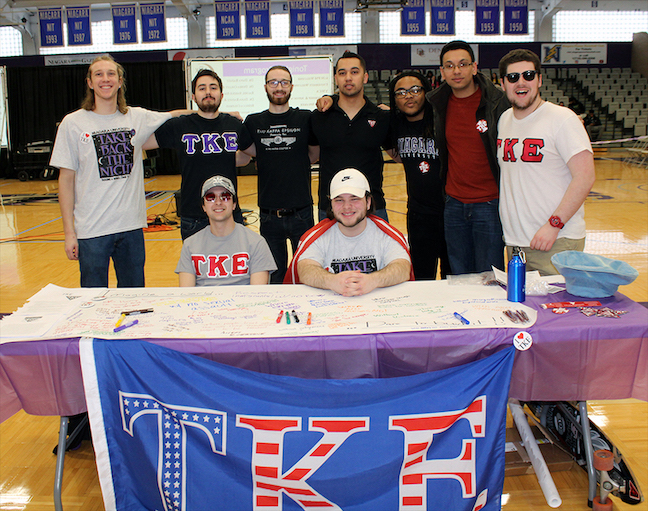 Members of Tau Kappa Epsilon show their support to end sexual, relationship and domestic violence during Niagara University's "Take Back the Night" event.

More than 350 students, faculty, staff and community members attended Niagara University’s fourth annual “Take Back the Night” event on April 4 in the Gallagher Center. Co-sponsored by the YWCA of the Niagara Frontier and coordinated by Dr. Jennifer E. Beebe, associate professor of counseling, and Dr. Dana L. Radatz, assistant professor of criminology and criminal justice, “Take Back the Night” aimed to end sexual, relationship and domestic violence in all forms. This year’s theme was “Imagine a World ... Dare to Build it.”

“The ‘Take Back the Night’ event is a prime example of individuals carrying out Niagara University’s Vincentian mission – the planning committee was interdisciplinary and included a wide range of students, staff, faculty and community partners – all working together to raise awareness around sexual and relationship violence,” Radatz said.

The evening began with a wide variety of resource tables, including many organized by Niagara University student clubs, that provided information and support on sexual, relationship and domestic violence.

“It is important to show survivors that they have people who support them and they don’t have to feel weak when they are put into a situation, especially with relationship violence and sexual abuse,” said Joseph Tricarico, a sophomore student who represented the student athlete advisory committee at the event.

Featured speaker Rebecca Coleman, Class of 2016, M.S.’17, spoke about her experience with sexual abuse during a brief program, and awards were presented to Dr. Hope Russell, adjunct professor of women’s studies, for Excellence in Leadership & Advocacy; and to the staff and editors of the Niagara Wire student newspaper, for student advocacy. The event concluded with a student-organized march across campus and a candlelight vigil.

“The Catholic and Vincentian mission of Niagara University calls on us to be the light for those who need our help, and this is another way we are able to do that,” said the Rev. James J. Maher, C.M., NU president. “We are committed to fostering an educational environment that focuses on the dignity of every human being who comes on our campus. I’m very grateful to the students, faculty, staff and administrators who have invested themselves in this cause to affect change.”

More than $630 was raised through admission to the event, which was donated to the YWCA of the Niagara Frontier.

“One of the most important things about this event is that a lot of people don’t think that sexual assault is going to happen to them,” said Maggie Gerard, a senior at NU. “A lot of people don’t come out and say it, but I think it is important that every single one of these clubs and students come to this event, because they say they are against it, and are avidly taking a stance against sexual assault, while making their groups aware of how it happens.”

“Through events like this, as well as other forms of relationship and sexual violence awareness outreach that NU conducts with students, it’s clear that the university administration has made sexual assault prevention a priority,” Beebe said.