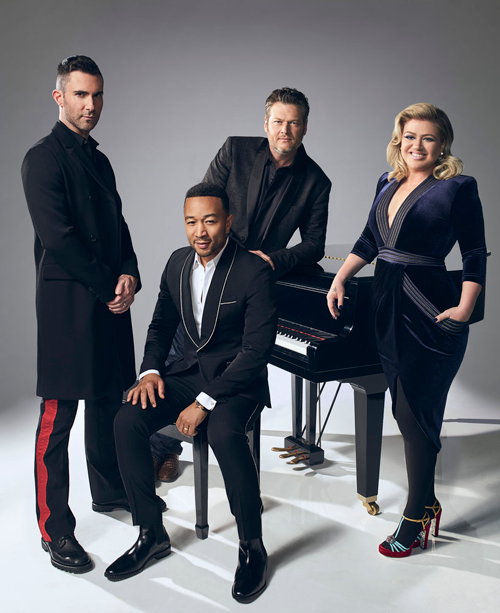 'The Voice' to debut all-new, game-changing 'Live Cross Battles' round

Four-time Emmy Award-winning hit musical competition series “The Voice” will debut an all-new, game-changing round called the “Live Cross Battles.” For the first time in “Voice” history, the superstar coaches – Kelly Clarkson, John Legend, Adam Levine and Blake Shelton – go head-to-head, each selecting one artist from their team to compete against an artist from an opposing team in an epic performance. The stakes are higher than ever before, as America’s vote will ultimately decide the winner of each “Cross Battle,” and who earns a spot in the Top 24 live show.

The new “Live Cross Battles” round will begin with 32 artists remaining in the competition. Over the course of two weeks, eight pairs of 16 artists will perform each Monday. “The Voice” will unveil a brand-new “Cross Battles” set design, in which the artists will be seated by team on dramatically lit benches around each side of the stage. In every “Cross Battle,” two coaches will go head-to-head in a “live schoolyard pick,” each selecting one artist from their team to go up against another team’s artist. Each artist will perform an individual song, and their fate is in America’s hands to decide the winner.

On the Tuesday results shows, host Carson Daly will reveal the winner of each “Cross Battle,” and 16 artists will advance to the next round through America’s vote. For the first time ever, each coach will also have the opportunity to save or steal eliminated artists live in the moment. The coaches will have one save and one steal to use over the course of the “Cross Battles,” and they will only have 10 seconds to decide if they want to push their button to save or steal an artist.

In another “Voice” first, coaches may enter the Top 24 live show with an uneven number of artists on their team, further adding to the drama and competition.

For a video preview of the Live Cross Battles round, click HERE.

Viewers can vote using app voting and online voting during the April 15 and 22 shows. Voting opens at the end of the ET/CT broadcast on “The Voice Official App” (App Store or Google Play) and at www.NBC.com/VoiceVote. For official rules, visit www.nbc.com/VoiceVoteRules.

So far this season, “The Voice” has averaged a 2.2 rating in adults 18-49 and 11.4 million viewers, according to “live plus seven day” Nielsens for the Monday edition, leading NBC to dominance as the top broadcast network this season on both Monday and Tuesday nights. Through the six “Blind Auditions” episodes of the current “Voice 16” cycle, the show scored a 3.2 rating in “live plus seven day plus digital” results, for a 10% increase on the 2.9 for the fall cycle. This marks the first time on record that a spring cycle’s “Blind Auditions” telecasts have grown versus the prior fall cycle’s in L+7+digital.