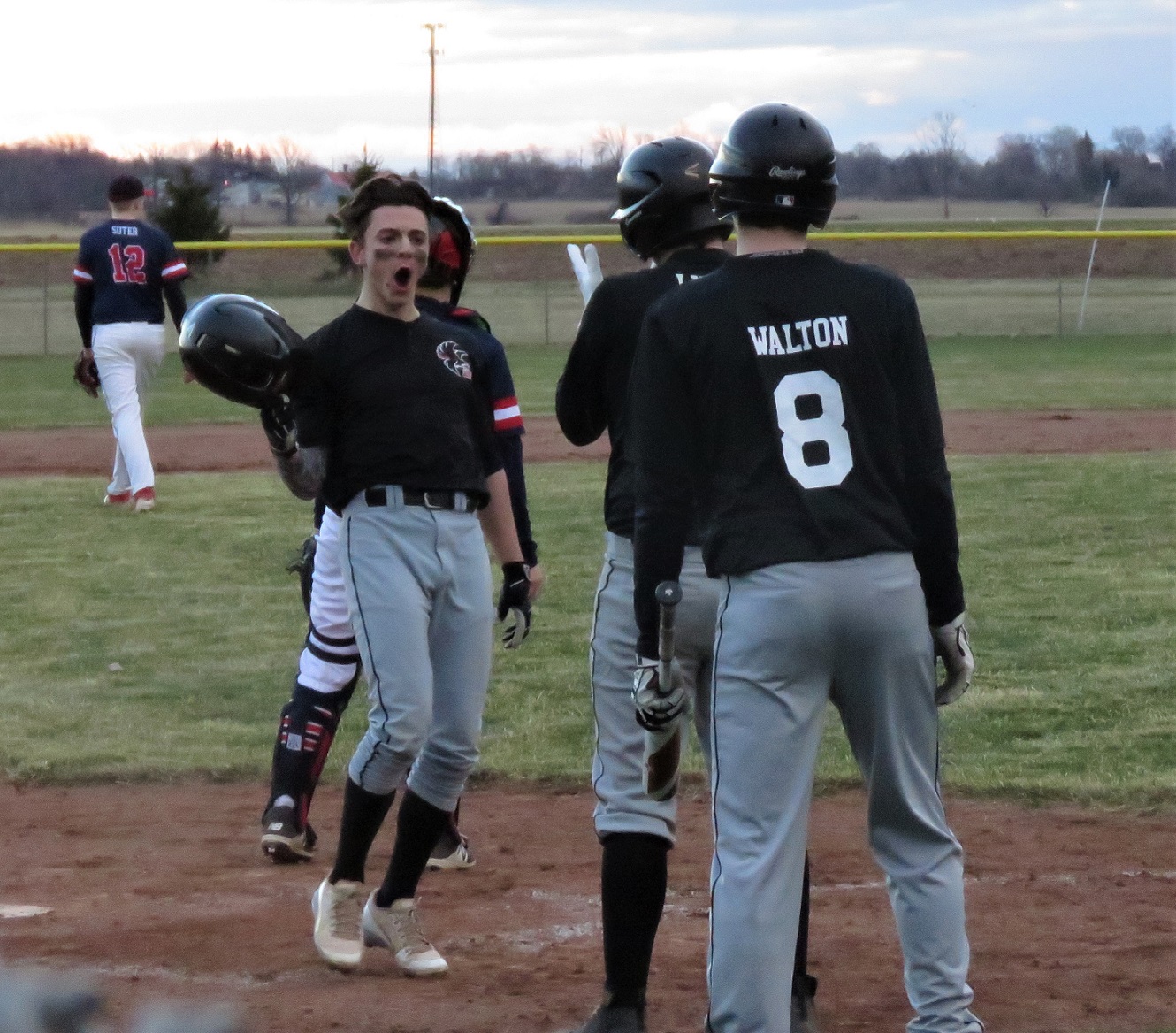 Matt Lysiak celebrates with teammates at home plate after scoring a run in the eighth inning of the Niagara-Wheatfield Faclons' 12-7 win over the North Tonawanda Lumberjacks. (Photo by David Yarger)

Spring sports in Western New York are played in some of the most brutal weather conditions. Tuesday, the baseball teams looked past the bitter cold, as the Niagara-Wheatfield Falcons defeated the North Tonawanda Lumberjacks in eight innings, 12-7.

The game was played with a “real feel” temperature barely topping 40 degrees, with high winds blowing out to left-center field. Additionally, the game was moved from NT’s Ramsay Field to the junior varsity diamond of Niagara-Wheatfield, due to poor field conditions.

The temperatures made life difficult for pitchers, as there was a combined 21 walks and three batters hit by pitches. Both offenses converted on the walks with timely hitting and a little bit of “small ball” thrown in.

Since the contest was North Tonawanda’s “home game,” the Jacks batted in the bottom half of the first inning.

Casey Trombley led off with a single and advanced to second on an error. Following a strikeout, Liam McMurray mashed a double to score Trombley and give NT an early 1-0 lead.

The Falcons answered back in the top of the second. After Chris Cacciatore led off with a double and Peyton Siegmann walked, the Falcons perfected a fake bunt double steal, which drew the NT third baseman in, leaving the base wide open for Cacciatore to swipe. A few pitches later, a passed ball scored Cacciatore.

N-W starter Tommy Peltier struck out the side in order during the bottom half of the second inning. Peltier notched all eight of his outs via strikeouts.

In the top of the third, the Falcons extended the lead by three. Ethan Guthrie walked and Adam Liberti was hit by a pitch. Matt Lysiak then roped an RBI single to score Guthrie and move Liberti to second. The next batter, Cacciatore, laced an RBI double into the right-center field gap to score Liberti. Lysiak would score on a groundout by Siegmann to make it 4-1, Falcons.

Peltier lost his control in the bottom of the third, walking six batters. The Jacks went on to score three runs to tie the game without recording a hit.

With the game tied, 4-4, Andrew Stillinger hit a single to right field for a one-out base hit. After a flyout, the Falcons did damage with two outs in the top of the fourth.

After a Guthrie walk to put runners on first and second base, Liberti singled to load the bases. Lysiak added his second and third RBIs of the game with a two-run double to score Stillinger and Guthrie, giving N-W the lead, 6-4.

Every time the Falcons scored, though, the Jacks had an answer.

NT loaded the bases after a walk, a single and another walk. Although, Trombley was thrown out on a close straight steal of home plate, McMurray came through again for the Jacks with an RBI single. Casey O’Bryan then scored the tying run after hustling home on a groundout to the pitcher.

After four innings, things were all tied at six.

Both teams were held in check offensively through the fifth and sixth innings.

In the sixth inning, the Jacks were threatening with runners on first and second, but the reliever Siegmann induced a ground ball to Liberti at third base, who stepped on third and threw to first for a double play. After a walk, Siegmann was able to get out of trouble with a flyout to right field.

In the top of the seventh, Cacciatore led off with a walk. After getting picked off at first base, Cacciatore broke for second base and was safe once the throw deflected off his sliding body and just off the infield dirt. Siegmann followed with an infield single to move Cacciatore to third. Despite having tough game offensively, Tyler Walton came through with an RBI fielder’s choice to give N-W a 7-6 lead heading into the bottom of the inning.

The Jacks continued to scratch and claw, though, as Casey Rogers led off with a base hit. A sacrifice bunt moved Rogers to second base. With one out, Zach Krathaus hit a laser up the middle to score Rogers and tie the game at seven.

In extra innings, the Falcons were able to put the final nail in the coffin.

Guthrie hit a ball to left that was misplayed out in left field, and he wound up on second base. Liberti was intentionally walked and Lysiak singled to load the bases.

With no outs and the bases loaded, Cacciatore notched his second RBI of the day with a sacrifice fly to score Guthrie. Siegmann followed with a two-run single to score Liberti and Cacciatore, giving N-W a 10-7 lead.

After Siegmann advanced to second base, Ben Shapiro laced a single, which scored Siegmann and made the score 11-7, Falcons.

Ben “Rico” Salomon then put the finishing touches on the game with an RBI single to right, which scored Shapiro and gave N-W a 12-7 lead.

In the bottom of the eighth, as it got darker and colder, and as one fan shouted “End this game before the snow comes,” Ryan Mellerski struck out the side for N-W to seal the team’s first victory of the season.

For the Falcons, Siegmann was the winning pitcher, throwing three innings with two strikeouts. Offensively, Siegmann went 2-4 with three RBIs and a run scored.

For the Jacks, starter Camerin Holmes threw five innings and struck out six batters, while, offensively, McMurray went 2-4 with two RBIs and a run scored, Trombley went 3-5 with a run scored, and O’Bryan and Paul Schwandt scored two runs.

In N-W’s most recent game versus Niagara Falls, the team struggled to get the offense flowing in a 2-1 loss. Versus NT, coach Jim Hagerty was pleased to see the team’s bats warm up.

“What we can practice in the gym is hitting, and I knew we would be a decent hitting team,” Hagerty said. “Part of it is getting hits, but another part of it is just making the defensive team make a play. Like the Falls, we really didn’t make them make any defensive plays. Today we made them make some plays. They made some mistakes (and) we have some decent team speed and we capitalized on some mistakes they made.”

In a cold and bitter game where both teams were recording a lot of strikeouts and walks, some defenses could possibly freeze up when a ball is actually put in play. Hagerty praised his defense for staying alive, despite walking 10 guys and striking out 15.

“The double play was huge,” Hagerty said referring to Liberti’s third base to first base double play. “It was very good, honestly. I don’t like giving a free 90 feet (and) we started the game with one under the glove; it’s a bumpy outfield. … During the cold and while our guys walked way too many guys today, our defense played well despite that.”

Hagerty added that the resiliency of the Falcons was seen Tuesday, as N-W answered each time NT would strike.

“We have a pretty good team. They like each other. They believe that the guy at the plate can do the job (and) the guy that gets the ball hit to him can do the job,” Hagerty said.

The Falcons used four pitchers to secure the win – Peltier, Pete Lysiak, Seigmann and Mellerski. Hagerty said, on a day where his No. 1, Peltier, didn’t have his best stuff, the other three were able to step in well. With the win being only the second game for team, Hagerty added that it was good to get four pitchers some work in live game action.

The Falcons defeated CSAT on Wednesday, 20-0. Ben Eodice and Salomon combined to throw a no-hitter.