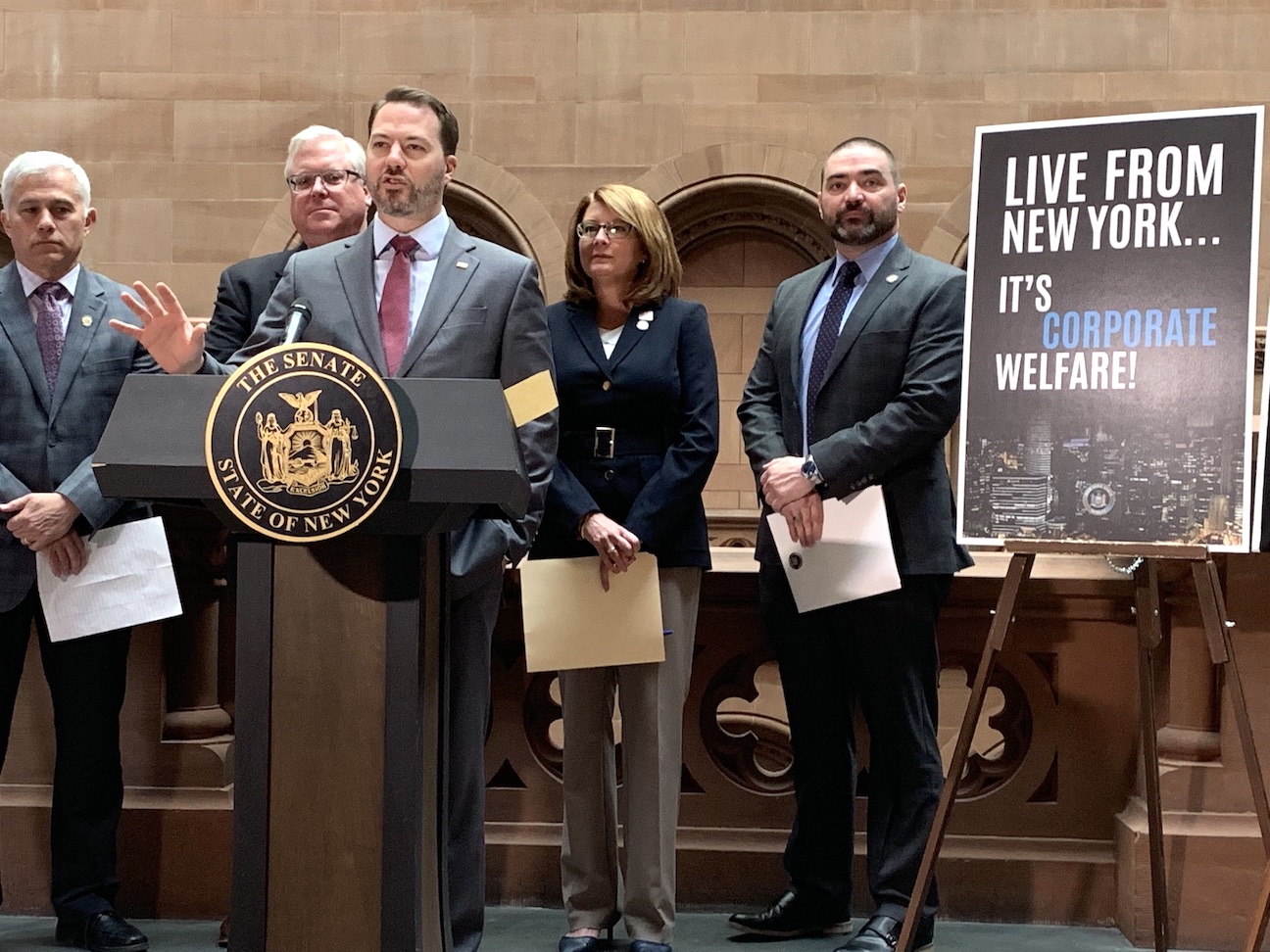 Ortt’s camp said, “What started as a modest $25 million tax credit has ballooned to the second-largest film industry subsidy in the U.S.”

With New York’s budget due April 1 and funding needs remaining, as well as Amazon’s much-publicized exit from New York, Ortt and his colleagues said the time was right for the tax credit’s elimination.

“As we stare down a budget deadline and weigh important funding priorities, we must question whether spending $420 million on the Hollywood film industry is the best use of taxpayer dollars,” Ortt said. “Our state’s roads, bridges and mass transit are in disrepair, veterans and women’s health programs are being cut, direct care workers are woefully underfunded, and our schools need help. Whether it’s agriculture or manufacturing, there are other critical industries struggling in New York that don’t benefit from anything near the corporate welfare that is the Empire State Film Tax Credits.”

Ortt’s camp said, “Earlier this year, Senate Democrats dismantled a deal between New York state/City and Amazon that would have seen $27 billion in revenue and 25,000 jobs brought into the state over the coming years. Along with local political concerns, Senate Democrats offered taxpayer-funded subsidies (in exchange for Amazon’s business) as their reason for opposition. Meanwhile, New York state continues to provide significant corporate subsidies through the $420 million annual tax credit to the film industry.”

The senators featured a sign and provided handouts showing the dramatic shift leading Democrats have taken on the issue. Cuomo, who has supported and expanded the program since taking office, recently suggested the credit be eliminated to fund other priorities. Democratic Sen. and Finance Chairwoman Liz Kruger has repeatedly questioned the need for the film tax credit and suggested it was too generous. But last week, she heralded the credits’ success and stated the Senate would not end the credit.

“New York state should not be handing out hard-earned tax dollars to multimillionaire movie makers like Harvey Weinstein,” said Republican Sen. Pam Helming. “Instead, we should be cutting taxes for hard-working families and small businesses. We should be investing in infrastructure and workforce development. New Yorkers struggle to pay some of the highest property taxes in the nation. So why are Senate Democrats from across the state spending $420 million of your money for perverts like Weinstein? Why aren’t they advocating for tax cuts for middle-class families? Why do Senate Democrats want to spend your money on an industry that promotes violence, sexual exploitation, drug use, terrorist acts and gender discrimination? The fact that ‘Saturday Night Live’ receives more than $10 million a year in tax breaks while our seniors are being forced from their homes, veterans' programs are being cut from the budget and schools are having to lay off teachers demonstrates just how disconnected the Senate Democrats are from the priorities of everyday New Yorkers.”

Because of the highly taxed and regulated environment in New York, public officials and film companies claim the tax credit is needed to incentivize production. The senators argued, however, for a broad need to improve the state’s business climate (a recent study by the Tax Foundation found New York once again ranks 48th out of 50.) They also pointed to figures showing that over 90 percent of the credits go to New York City – the world’s pre-eminent hub of fashion, finance, culture and media – and the glaring examples of filming that would have occurred in the city regardless of the incentives. “SNL” received $68 million in film tax credits its received from 2008-18. Millions more went to shows that prominently utilized the city as the core of the show itself and would have likely filmed in New York regardless, including “Thirty Rock,” “Law and Order” and “Sex and the City.”

“The Empire State Film Tax Credit should be eliminated as the majority of recipients would film in New York state without this credit,” said GOP Sen. Robert E. Antonacci II. “In addition, the film tax credit disproportionately favors New York City. This funding would be better utilized for health care and other essential budget restorations, broad-based tax cuts to create a more business-friendly environment statewide or economic development upstate, which has lagged well behind New York City.”

Ortt’s team said, “The senators also expressed their continued support for increased transparency surrounding the program. Identifying recipients of the tax credit is often laborious due to the significant lag and incomplete data available through Empire State Development. The Database of Deals legislation would shed light on the billions of dollars the state doles out in tax credits, but it has been consistently blocked by Democrats.”

A final concern was raised regarding the ethics surrounding the program due to the donations film companies provide to elected officials (almost universally Democrats) in New York. WikiLeaks revealed emails between Sony executives and Cuomo’s campaign staff where Sony executives suggested donating to Cuomo due to his strong defense of New York’s film tax credit.

“Gov. Cuomo and the Senate Democrat leadership need to stop putting Hollywood film producers above the hardworking men and women gutting it out every day in New York's abysmal business climate,” said GOP Sen. Fred Akshar. "The governor's team continues to double-down on the same failed economic development policies when they should be focused on making New York more affordable for everyday New Yorkers. The millions forfeited to Hollywood could easily cover the governor's raid on Aid to Municipalities (AIM) funding that's forcing local governments to either raise taxes or cut services for New York residents. New Yorkers are leaving in droves, and giving tax breaks to film producers does nothing to stop that. How many more manufacturers, small businesses and residents must we lose before we change course and work to make New York more affordable for everyone?"

As the budget deadline nears, Ortt and his Senate Republican colleagues are asking Senate Dems to join them in ending the New York Film Tax Credit, and reinvesting the $420 million into services that benefit the greater public.