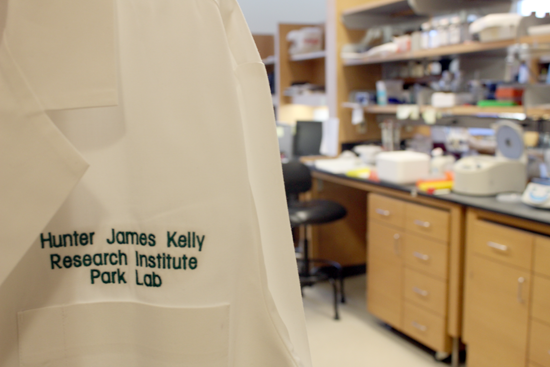 Congressman Brian Higgins announced millions of dollars in federal funding to support the research of Krabbe leukodystrophy, known as Krabbe disease. A grant from the National Institutes of Health in the amount of $433,627 in the first year and over $2 million over a five-year period has been awarded to M. Laura Feltri, M.D., and Lawrence Wrabetz, M.D., co-directors of the Hunter James Kelly Research Institute at the University at Buffalo. This is the latest in a series of awards earned by the institute this year furthering Krabbe disease research.

“This federal investment demonstrates a continued confidence in UB’s role as a leading research institute, and will support years of critical work here in Western New York toward the goal of better understanding and treating Krabbe disease,” Higgins said. “NIH funding plays an essential role in supporting the research that provides clues to better treatment and hope for a better tomorrow for those afflicted with disease, and those who love them.”

Michael E. Cain, M.D., vice president for health sciences and dean of the Jacobs School of Medicine and Biomedical Sciences at UB, said, “This grant and the groundbreaking work that it is funding here in Buffalo demonstrates the powerful impact that the Hunter James Kelly Research Institute is having on all the myelinating diseases that are being studied here. The institute has become an important, international hub for research ranging from rare diseases, like Krabbe’s disease, to diseases seen more frequently, such as multiple sclerosis. We want to thank Congressman Higgins, New York state, Hunter’s Hope and the University at Buffalo for this continued, critical support.”

Feltri, who is also a professor in the departments of neurology and biochemistry in the Jacobs School, and co-director of the Hunter James Kelly Research Institute at UB, explained the importance of this research.

“We are at an important turning point in our understanding of the mechanisms that contribute to this disease,” she said. “Based on the research done here at the institute, we are finding that we need to rethink some of the previously accepted premises about Krabbe’s disease. This grant will allow us to continue that important work in order to ultimately develop the best therapies to treat and ultimately cure it.”

Krabbe Disease is a rare neurodegenerative disorder occurring in about 1 in 100,000 individuals. It typically manifests in the first few months of life and is often fatal. KD is one of many leukodystrophies that destroy the protective myelin in nerve cells, impacting the brain and spinal cord.

The award from the NIH’s Institute of Neurological Disorders and Stroke, titled “The peripheral nervous system: a window into Krabbe Disease,” will provide a total of $2,092,212 from 2019-24. Researchers at UB’s Jacobs School of Medicine and Biomedical Science and the Hunter James Kelly Research Institute will seek to increase the understanding of which cells are involved in Krabbe disease in order to identify limitations of today’s treatments toward the goal of improved results.

The Hunter James Kelly Research Institute, founded in 2004, is an initiative that was spearheaded by UB and the Hunter’s Hope Foundation, which was established by Jim and Jill Kelly, in honor of their son, Hunter, who bravely fought Krabbe disease for eight years.

The NIH has also awarded the Hunter James Kelly Research Institute and the Jacobs School a $435,875 grant for two years, and $398,750 for a one-year grant titled “Selective galactosylceramidase ablation to study the pathogenesis of Krabbe leukodystrophy” (Dr. Daesung Shin); a $153,772 F30 fellowship to the M.D.-Ph.D. student Nadav Weinstock; and a $435,875 two-year grant to Dr. Thomas Langan, titled “Enhancement of Newborn Screening Diagnostic paradigm to improve efficacy of cord blood transplant for Krabbe disease."

In addition to the $3.5 million-plus in federal funding provided through the NIH, Wrabetz recently received $160,000 from the European Leukodystrophy Association to conduct Krabbe disease research.

More information about Krabbe disease can be found on the NIH website at: https://ghr.nlm.nih.gov/condition/krabbe-disease.