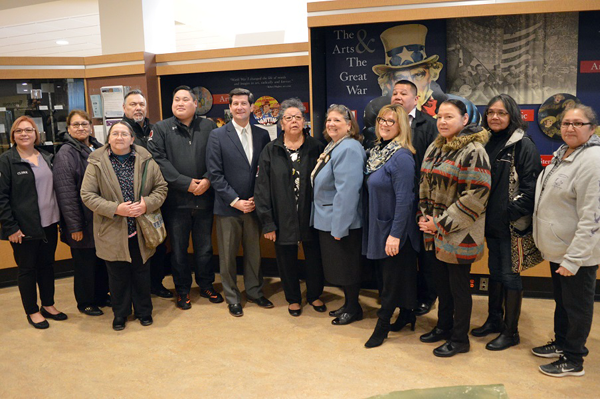 Erie County Executive Mark Poloncarz joined Executive Director of the Erie County Commission on the Status of Women Karen King, county legislators and members of the Monumental Women of WNY as the committee presented an update on the progress of the Monumental Women of WNY project. The initiative will recognize trailblazing women of WNY through the placement of a series of public monuments and plaques that will highlight the “hidden history” of women in public life, and help to raise awareness of the many contributions women have made to this region.

Three monuments are planned for the inaugural round of the project: Louise Bethune, Mary Talbert and Geraldine “Sid-tah” Green.

“The Monumental Women project will begin with three WNY women who fearlessly led the way in their respective fields and showed the world what women can do,” Poloncarz said. “These are women who succeeded in male-dominated fields and cultures; women who spoke their minds and pursued goals that paved the way for generations of women who came after them. It is very fitting and appropriate that the first three monuments will celebrate a white woman, an African-American woman, and a Native American woman, and I thank the ECCSW and the Monumental Women committee for the work they are doing to honor the achievements of these women.”

Medaille College Vice President for Academic Affairs Dr. Lori V. Quigley noted the Committee on the Status of Women has endeavored to recognize “truly impactful” Western New York women of diverse backgrounds. Quigley, a recognized expert on Native American issues, was instrumental in the decision to honor Geraldine “Sid-tah” Green, a faithkeeper at the Newtown longhouse on the Cattaraugus Territory of the Seneca Nation.

“Sid-tah was a respected elder of the Senecas, but she was respected on the world stage, meeting with national and global leaders like former Secretary of State Hillary Clinton to discuss issues of importance to the Seneca Nation, to women, and to all people, really,” Quigley said. “When young people look at the statues of important figures from Buffalo’s history in our parks and civic buildings, it’s important they see impactful women being celebrated as role models and transformative figures.”

The project’s first monument recognizes Louise Bethune, the first professional woman architect in the U.S. Bethune practiced from 1881-1913 and includes the Lafayette Hotel among her significant and enduring architectural achievements. She was also a founding member of the Buffalo Women’s Wheel and Athletic Club.

The second monument will recognize civil rights leader Mary Talbert, a founder of the Niagara Movement, which was a precursor to today’s NAACP. A staunch and tireless advocate for civil and women’s rights, Talbert served as a member of the Women’s Committee of National Defense in World War I and was appointed to the Women’s Committee on International Relations following the war.