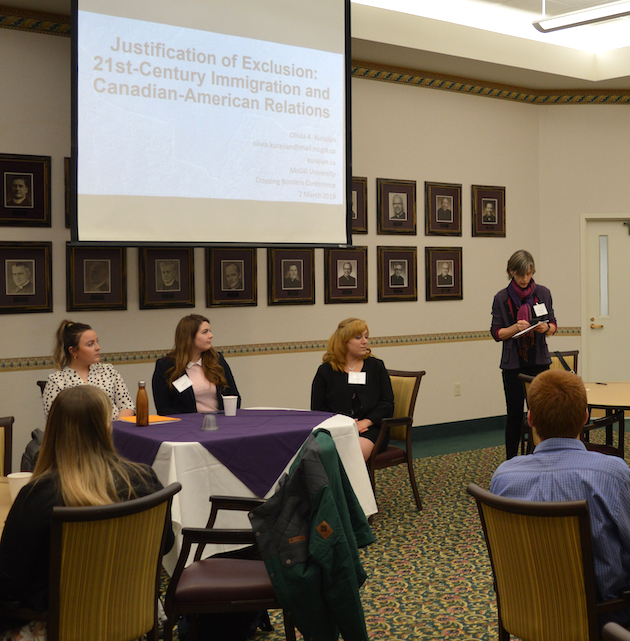 Students and faculty from the U.S. and Canada discussed their research on issues connected with American-Canadian relations at the 2019 "Crossing Borders" interdisciplinary student conference at Niagara University.

More than two-dozen students from the U.S. and Canada presented their research on issues connected with American-Canadian relations at the 2019 “Crossing Borders” interdisciplinary student conference, held March 1-2 at Niagara University.

Undergraduate, graduate and professional school students from Niagara University, Brock University, the University at Buffalo, McGill University, University of Toronto, SUNY Geneseo and Wilfrid Laurier University discussed their findings on topics that included human trafficking and poverty in Canada and the U.S.; political influences in federal and provincial governments; shaping policy and public opinion on leadership, sport and immigration; health care; and issues of sovereignty, identity and trade among the indigenous peoples in the borderlands.

“This conference brings together future leaders who will tackle some of both our nations’ most pressing issues,” said Dr. Shannon Risk, associate professor of history at Niagara University and conference organizer. “The conference provides the seedbed to get those difficult conversations started and for students to build their professional networks. For quite a few of these students, the conference marks the first time they have presented their research in a professional setting, as well. I have seen countless students really blossom year after year in this gathering and beyond.”

The annual event was established to foster academic relations between students throughout the cross-border region under the aegis of the Golden Horseshoe Educational Alliance, a consortium of universities from both sides of the border. The first conference was held at NU in 1996. Venues alternate each year between host universities in the U.S. and Canada. It has been supported by both the U.S. Consulate General, Toronto, and the Canadian Consulate General, New York, as well as government officials and scholars from both sides of the border.