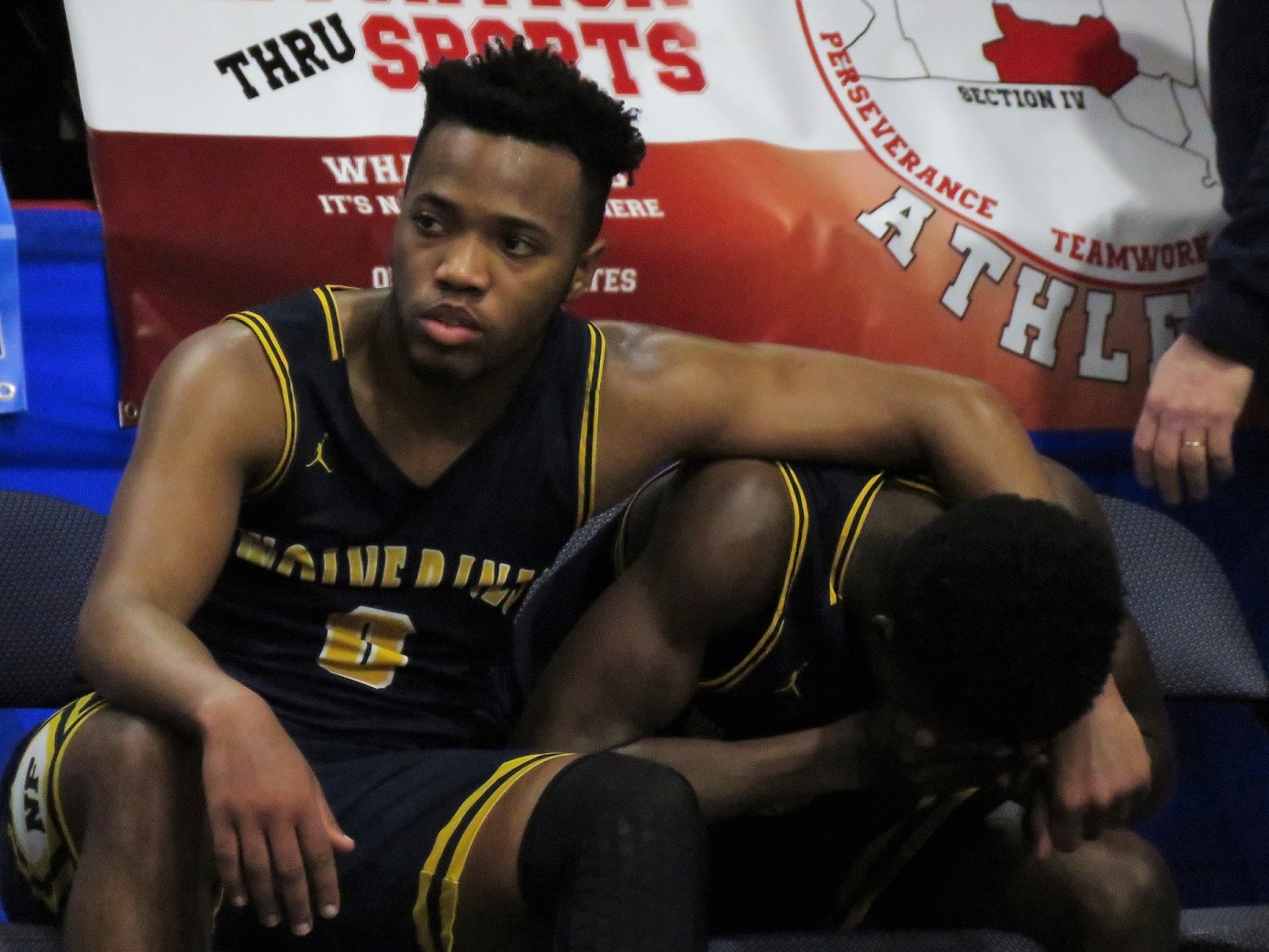 The entire 2019 playoff run for the Niagara Falls Wolverines boys basketball team the narrative has been that the big shot always goes down.

Friday evening, that was not the case, as the Wolverines were defeated by West Genesee in the New York State Public High School Athletic Association semifinals, 59-57.

The Wolverines trailed by as many as 12 in the final quarter before making a ferocious comeback. NF had good looks to tie and take the lead with under 30 seconds left, but nothing would fall for the team.

In the early going, West Genesee got off to a quick start with 3-pointers from Christian Rossi and John Benson to create an 8-1 lead.

Willie Lightfoot nailed a 3-pointer for the Wolverines’ first field goal of the game to make it 8-4.

With the score 14-11, Wildcats, Jalen Bradberry nailed his first trey in three games to tie things up after one quarter.

In the second quarter, Jaemon “Mookie” Turner gave the Wolverines its first lead, 16-14, after corralling a long rebound and hitting a corner jump shot. Turner would score the first 7 NF points of the second frame.

Following Turner, senior Josiah Harris knocked down a 2-point jumper, then a 3-ball, which tied the game at 26.

Near the end of the half, senior Moran Montgomery reeled in a rebound off a Turner 3-pointer, and in one motion put the ball up and in while drawing a foul. Montgomery made the free throw and the Wolverines led, 29-28.

After four-straight West Genesee points, Naim Bradley followed up on a Lightfoot missed layup to cut the Wildcats lead to one, 32-31, at halftime.

Turner was the high scorer at the break with 10 points.

The third quarter was all Wildcats, as the team won the quarter, 16-7, to take a 48-38 lead into the final quarter.

In the fourth quarter, after a Harris trey made it a nine-point game, the Wolverines went on a 10-4 run, capped by another Harris 3-ball, to make it 54-51, West Genesee.

The Wildcats extended its lead to 58-51, but back-to-back 3-pointers by Harris cut the lead to one.

From there, the Wolverines couldn’t find the bottom of the bucket.

Harris went for a fourth straight trey, but it was no good. The Wolverines fouled Jack McLane of the Wildcats who then missed two free throws.

On the next offensive possession, Lightfoot’s corner three missed and the Wolverines once again fouled McLane.

As the Wolverines came up the court, the team went into a motion offense and found Lightfoot again for a decent look in the corner.

After Lightfoot had hit several big shots the entire playoffs, Wolverines coach Sal Constantino said he was hoping the shot would go down, but Friday it did not, and NF’s run was over.

“We didn’t shoot it as well as we’re used to shooting the ball,” Constantino said. “Size obviously gave us problems around the basket.”

Constantino then praised his team’s comeback efforts and said it would’ve been easy just to collapse down 12 points late.

“There was a time we were down 12 at the start of the fourth quarter. … We could’ve quit – no doubt – we could’ve just packed it in. And we didn’t. That’s the character of this group of kids,” Constantino said.

Following the game, Lightfoot, Constantino and Harris shared an embrace near the end of the bench. The freshman Lightfoot was visibly upset after a tough 5-point game.

“I get it. When you put so much into it, it hurts so bad,” Constantino said of the embrace. “But there is a tomorrow. There will be another day. There will be a lot more basketball in those kids’ lives.”

Constantino gave credit to the Wildcats roster who listed six players 6-foot-4-inches or taller, compared to the Wolverines tallest player, Bradberry, at 6-foot-3. He said West Genesee was big and strong and that gave them an advantage over the smaller Wolverines.

The mood in the locker room following the game could be called depressive. The Wolverines were devastated over the loss, but Constantino said, despite the loss, he’ll remember the good times.

“The further you get, the more painful the loss is,” Constantino said. “The kids are really beat up about it, but I said I’ll just think about Jaemon Turner getting hot versus Orchard Park, Jalen taking a charge against Will North, Naim Bradley hitting a big three against McQuaid, how Willie … stuck out as a catalyst for us.”

The Wolverines are a young team, but Constantino will wave goodbye to Harris, Montgomery, Bradley and Jaden Turner. Constantino had said before he worshipped the Class of 2019.

“It’s something I’ve said the whole playoff run. It’s such a pleasure for me to watch the kids have fun and enjoying it and jumping around with smiles on their faces,” Constantino said. “To watch guys tonight it hurts, because you care about the kids. You’ve had them for so long and to see them in tears tugs at my heart.”

For the Wolverines, Harris led the way with a game-high 22 points, including six 3-pointers. Mookie Turner netted 15 for NF, while Montgomery added 10. The team’s shooting struggles were also seen as Lightfoot and Bradberry combined for just 8 points. The sophomore Bradberry additionally corralled 10 rebounds in the loss.