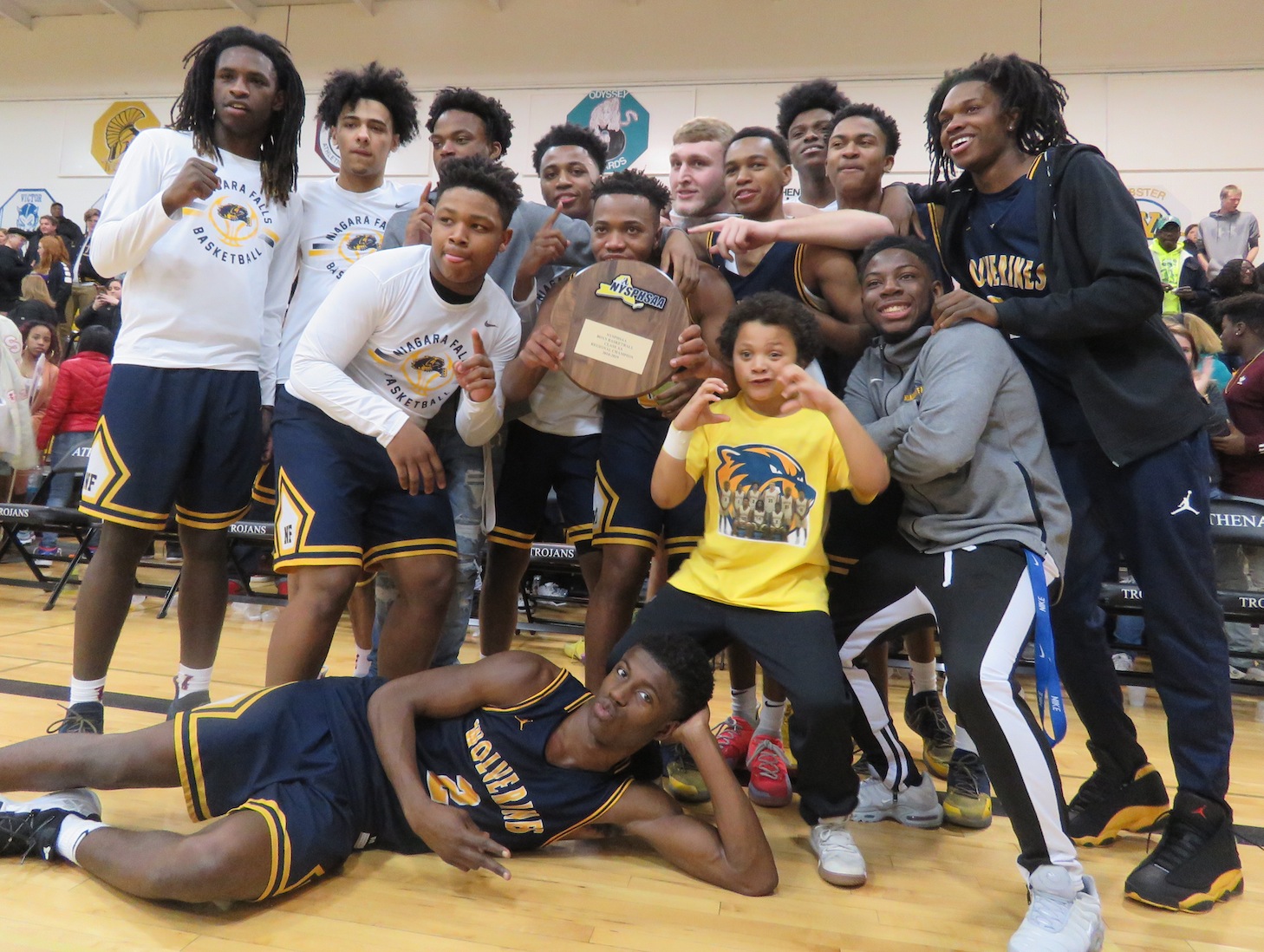 As Niagara Falls coach Sal Constantino would say, though, that was then and this is now.

This year’s team has been throttled by an offensive attack averaging just under 80 points per game.

The five are all capable of dropping double-digit point totals on any given night. Montgomery, for majority of the season, has been tasked with guarding opposing teams’ big men who have sometimes six to seven inches advantage on him.

Turner has seen a stellar playoff run. The “silent” assassin as Constantino calls him, has had a recent three-game stretch of 25 points, 16 points and 14 points.

Harris, the senior captain along with Montgomery, struggled the first couple playoff games, but came alive in the Far West Regional versus McQuaid with 13 points, including four 3-pointers. Harris is always a threat from behind the arc and on the defensive end after setting a school record in charges taken.

Bradberry has struggled with his jump shot of late, but has found other ways to contribute to the team through his defense, passing and driving ability. Bradberry netted 16 points in the game versus McQuaid. When the Niagara Catholic transfer finds his stroke, it can wreak havoc for defenses. Bradberry set the NF record with 11 trey’s in a regular season game versus Kenmore East.

Of his performance, Constantino said, “The first thing we’re telling him is ‘keep shooting,’ because we know he can shoot it. You talk about maturity and growth … he’s probably one that’s grown the most. … He’s done so many different parts of the game. His rebounding, his assists, he’s really shown the other aspects of his game.”

Lastly, Lightfoot has been nothing short of spectacular in the Wolverines playoff run. The freshman practically willed NF to victory in the Section VI final versus Williamsville North with 39 points. Lightfoot had 32 second half points, including the game-tying trey to send the game to overtime, while North had 30 points as a whole in the final half and overtime.

Versus McQuaid, Lightfoot was at it again with 32 points, including two dagger 3-pointers and an unthinkable reverse layup to increase the NF lead to 10 points late in the fourth quarter.

Going forward, the team will face West Genesee in Binghamton. The Wildcats will pose a “tall” threat to the Wolverines with six players 6-foot-4-inches or taller on the roster, including 6-foot-7 senior and Siena College commit Lucas Southerland.

Harris said of the game, “We feel good. I think a big thing will be rebounding. As usual, we’re always undersized, but I think we got that dog (mentality) in us that we can go get it.”

Montgomery, who will be asked to grab a majority of those rebounds, said, “It’s just another day. (You) gotta play hard regardless of the size or not.”

NF’s tallest listed player is Bradberry at 6-foot-3, so Constantino said the Wolverines will look to speed things up on the Wildcats.

Missing amongst the discussion of height on the Wolverines roster is Taylor Sanders. The 6-foot-1 junior suffered a knee injury near the beginning of the year, which put him on the shelf for the year. Sanders started at forward for the Wolverines, and was another threat behind the 3-point line. Constantino said it’s astonishing to think back at how good the team was with Sanders and how far they’ve come since his injury.

“I feel awful for the kid. He’s worked so hard and he was really having a heck of a season in the beginning,” Constantino said. “You almost forget, because of how long he’s been gone, how good we were. I think the team has kind of rebounded around his injury and guys have changed parts of their game for the better. I feel for the kid, though, because he’s as much of a team player as you’re going to find.”

The state final four appearance is the first for Constantino in his nine-year tenure as coach. The Wolverines had been knocked out in the Far West Regional game the past three years, so to get over the hump meant a lot to Constantino, as well as Harris and Montgomery as seniors.

“When we won that game, for me, as the kids are all jumping and everything, it makes me feel good to see them enjoying it, because I think these are good kids,” Constantino said. “I know the sacrifices they put in all summer and spring long. They really commit year-round to this. To see everything pay off makes me feel good for them.”

“It definitely feels good as a senior to get over that hump,” said Harris, who has played in two of the three regional losses. “It’s not the last step, though. We still have more work to do.”

Montgomery added, “It feels great, especially being in this position as a senior to be able to make it this far with the team I love to play with.”

The duo also said playing with the group has been an absolute joy this season and they hope to collect some more hardware in Binghamton.

In what’s been an adventurous 21-3 season to date, Constantino said he’s learned a lot about his team during the playoff stretch.

“I’ve seen a maturity growth in them, and I think we’ve learned to handle a little bit of adversity on the court. … When we handle adversity, we’re better players and we’re a better team,” Constantino said.

Montgomery and Harris agreed with their coach.

Montgomery said, “We seem to pick each other up through the tough times and everybody plays hard every second of the game.”

Harris replied, “We really grew as a team. We matured a lot. Early on, we would get frustrated and things would seem to fall apart, (but) I feel like we’ve grown past that.”

Moving forward in the final four, Constantino did not lack confidence in his squad.

“We’re not satisfied,” Constantino said. “The game can go either way. I look at the other two teams on the other side and we’re not afraid of anyone. Nobody puts fear in our hearts. I’m not telling you to hand us the plaque today, but we can certainly walk away with it.” 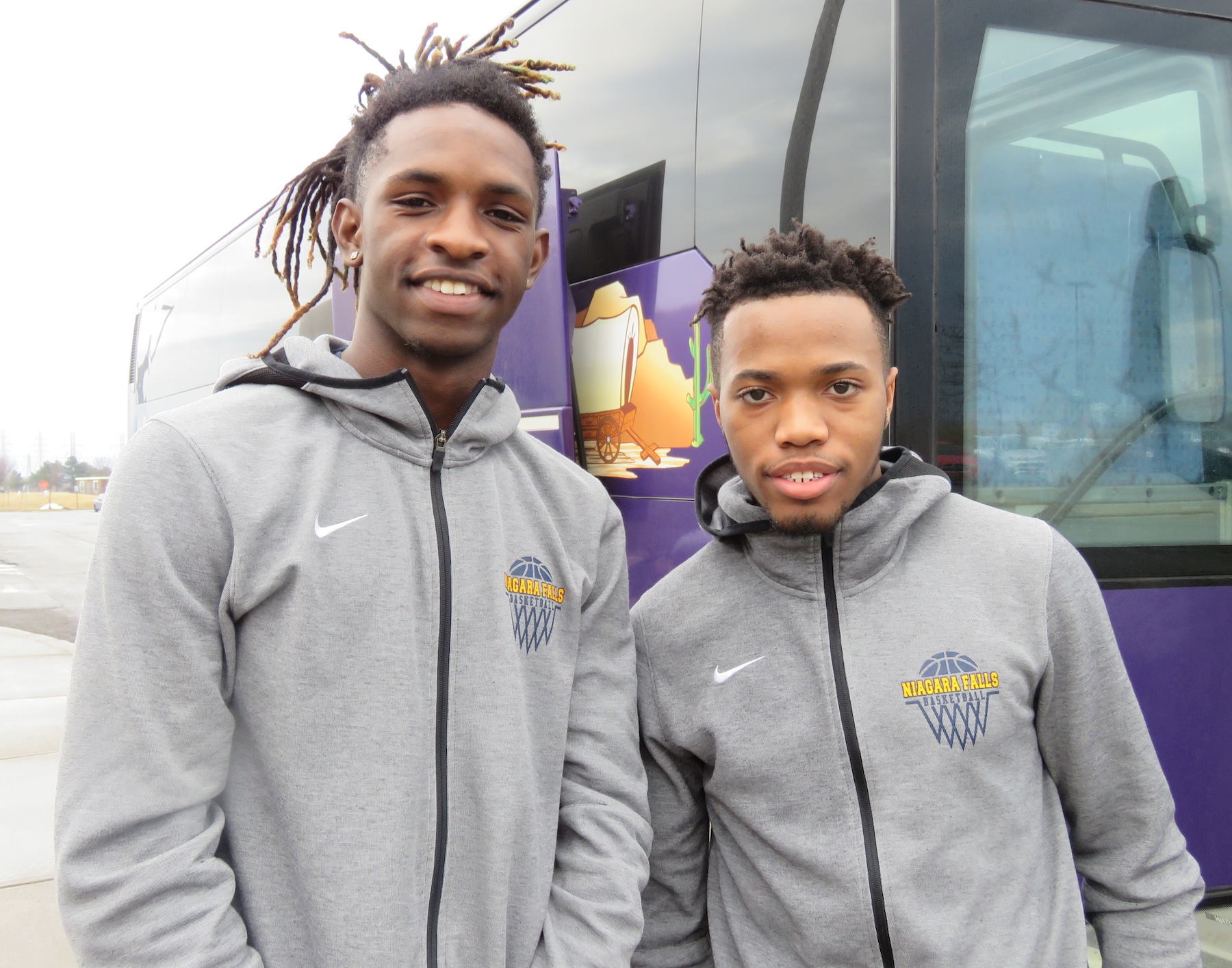