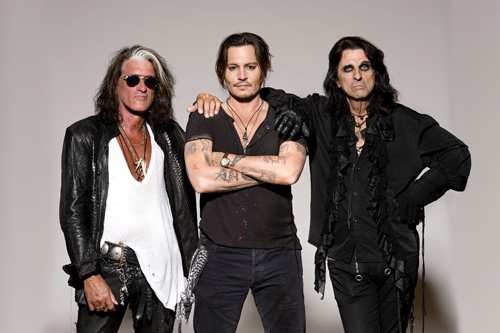 Tickets go on sale on Friday

The Hollywood Vampires – featuring Alice Cooper, Joe Perry and Johnny Depp – announced spring 2019 tour dates. The band, which previously performed at Rock In Rio and the 2016 Grammy Awards in addition to U.S. and EU/UK tours last year, will play several shows on the West Coast in May. All dates are below.

In 1969, on the Sunset Strip at the legendary club, The Rainbow Bar & Grill, The Hollywood Vampires were born in the upstairs bar. It was a gathering place for the rock stars living in or passing through L.A.

"To join the club, one simply had to outdrink all of the members," said Cooper, a founding member of the original Vampires.

Cooper and good friend Depp got together and decided the spirit of The Hollywood Vampires should live again – minus the drinking. Old friend Joe Perry joined them, and the recording began – a tribute to the original Hollywood Vampires. An environment was born for artists to hang, laugh and play together.

New music from The Hollywood Vampires is expected this summer.

The Hollywood Vampires on tour: