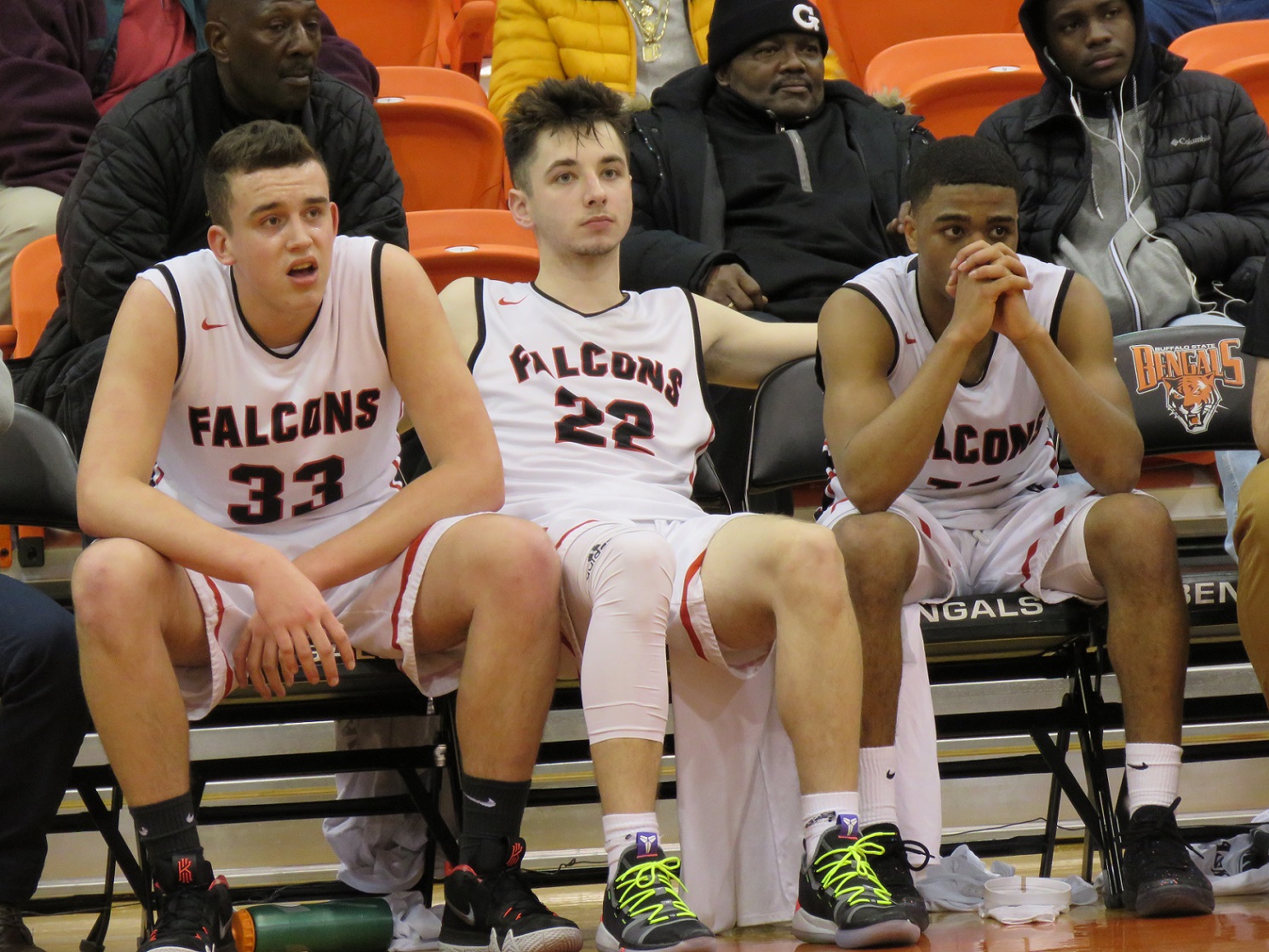 From left, seniors Cam Miller, Roman Wright and Davon Ware watch as time ticks down during the Niagara-Wheatfield Falcons' 66-43 loss in the Section VI Class A1 semifinals. (Photos by David Yarger)

Niagara-Wheatfield dropped in Class A1 semis

Everything was looking grand for the Niagara-Wheatfield Falcons boys basketball team.

Last Saturday, the team upset rival North Tonawanda, clinching a berth to play in the semifinals at Buffalo State for the first time in 14 years.

The team rode an emotional high heading into the Section VI Class A1 semifinal matchup versus Williamsville East Thursday night, but the Flames knocked the Falcons back down to earth, as N-W was defeated, 66-43.

In the team’s last 13 games where the team went 10-3, N-W was able to score the ball efficiently. Thursday it seemed as if a lid was on the hoop.

The Falcons were down 8-3 early, but gained a boost off the bench as senior Roman Wright came in and scored five straight points to tie it at 8.

Ben “Rico” Salomon gave the Falcons its first lead with a 3-pointer, and senior Raejaun Smith added a bucket to make it 13-10.

Unknown to the Falcons, things would turn bad quickly.

The Falcons struggled to contain Cal Shifflet of the Flames in the first half, who finished with a game-high 29 points.

Shifflet’s 13 first half points helped the Flames grab a 33-25 lead at the break.

Defensively, the Falcons were efficient in the first five minutes of the third quarter, limiting the Flames to just five points. But, the offensive shortcomings continued to bite N-W, as the team, in that span, answered with just three points and trailed, 35-28.

After a Wright bucket to cut the Falcons deficit to 42-32, it was as close as the Falcons would get the rest of the game.

After a Max Schneider jumper to end the quarter, the Flames added to its lead with a 22-2 run, before reserves came in for both squads. At that point, East led, 66-35.

The Falcons would score the final eight points of the game, as Andy DeVantier nailed a trey and two free throws, then senior Cam Miller drained a corner 3-pointer before exiting the game to an ovation from the N-W faithful and a hug from his father, assistant coach Steve Miller.

As the horn sounded, Williamsville East moved on to face West Seneca West in the Section VI Class A1 finals.

Along with Shifflet's 29 for East, Schneider added 11, Kevin Early had 10 and Yusuf Hashmi netted 8.

For the Falcons, who were vying to make their first finals appearance since 1973, Wright and Smith led with 12 and 10 points, respectively, while DeVantier and senior Zach Stanley added 5.

Falcons coach Erik O’Bryan said the Flames didn’t do anything differently from the first time the two teams battled, which resulted in a 19-point, 67-48, N-W victory, but this time around the Flames were just like their name shooting the ball.

“At one point we took a 13-10 lead and I wish we could go back and freeze time there and figure out what went wrong,” O’Bryan said. “The Shifflet kid was hot in the first half. We figured out a way to shut him down a little bit better – we started denying him the ball. But credit to their role guys, (they) really stepped up tonight.”

He added the after starting the season 3-6, the team went 10-3 in its last 13 games, but tonight the team played like it did the first nine games of the year.

“We kind of played like we started, and that’s how we finished. … I told the guys that I feel its ironic that I feel tonight is how we played in the beginning of the year, then we got out of that funk, and how ironic is it that we finish the year like that,” O’Bryan said.

The Falcons will lose five seniors to graduation this year including Davon Ware, Stanley, Miller and Wright and Smith, who both transferred from Niagara Catholic upon its closing. O’Bryan gave nothing but praise to his seniors for what they accomplished this season.

“The five seniors laid the foundation for this group and its always been trying to break through that ice and get here (Buff State). Now that we got here, hopefully the young guys see that and they understand that there’s more to accomplish when you get here.

“First off, I had Stanley, Miller and Ware for five years. They have me (as) a lifelong friend now. They got through the program and now I’m a lifelong friend. It was amazing that we could have two kids come over from Niagara Catholic in Raejaun and Roman Wright, because they also gained a lifelong friend in me. What they did to add to our program; we couldn’t have asked for two better kids to join us and be a part of our program.

Ware, who struggled in his final game, was also given a lot of praise for how he matured in his time as a guard for the Falcons.

“These five seniors mean the world to me. Davon and I have had our clashes over the years and, man, our relationship has just gotten better and better every year.

“I thank them for everything they did. We were 3-6, and we could’ve just quit. … Instead of seniors being seniors and pointing fingers, these guys gelled together, we (won) six-straight, finished the year on an emotional high, made it to Buff State for the first time in 14 years and now the next goal is to get the monkey off the back to get to a final for the first time in 46 years,” O’Bryan said.

O’Bryan added that the team has a young junior varsity squad and some young guys coming back like TJ Robinson, DeVantier and Salomon.

Niagara-Wheatfield gets known for their hockey and wrestling programs to name a few, but this year the basketball program was able to give a glimpse at their abilities. O’Bryan said he was proud of that and the season has been an incredible run.

For the Falcons, the team finished with a 13-10 record. 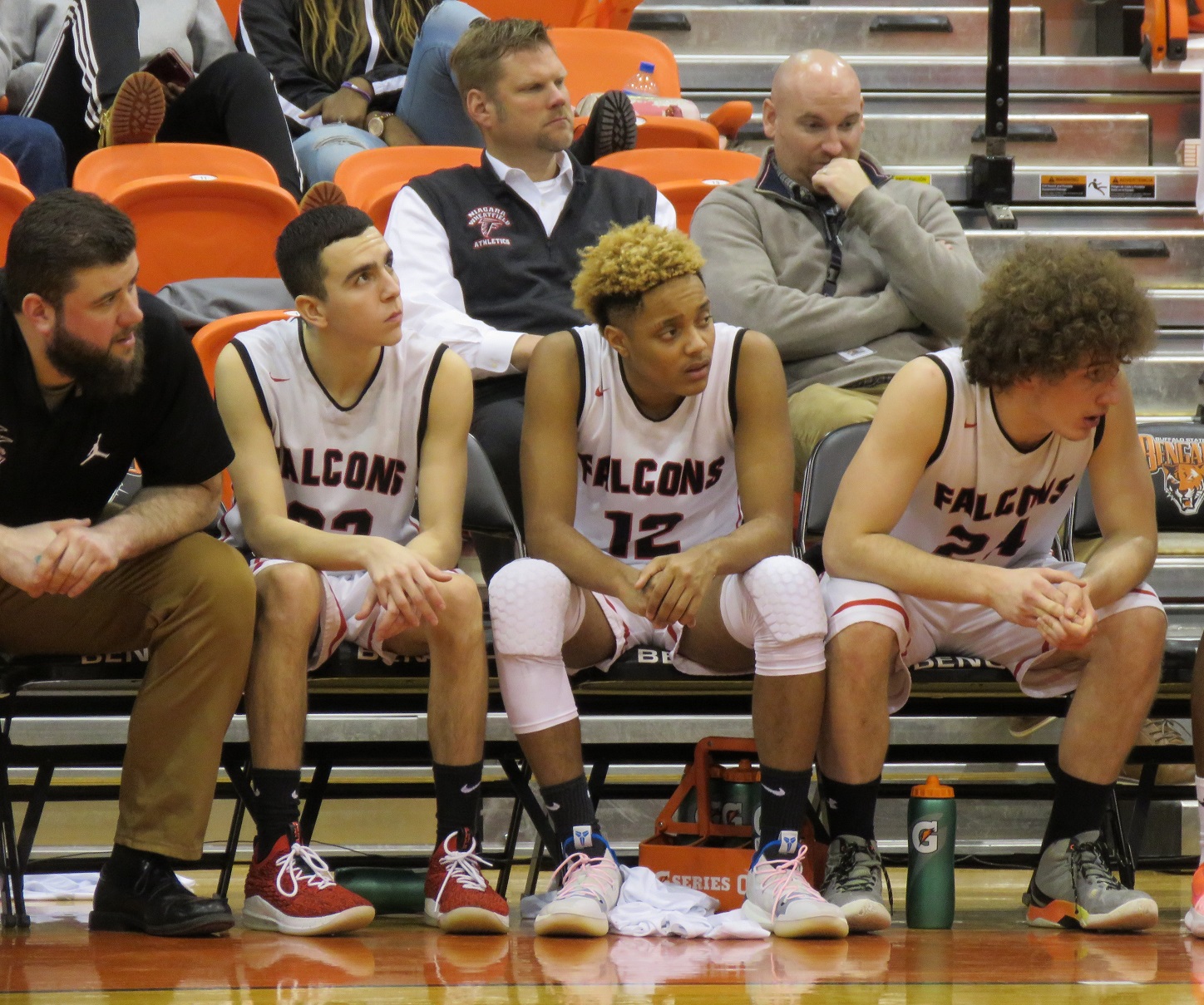 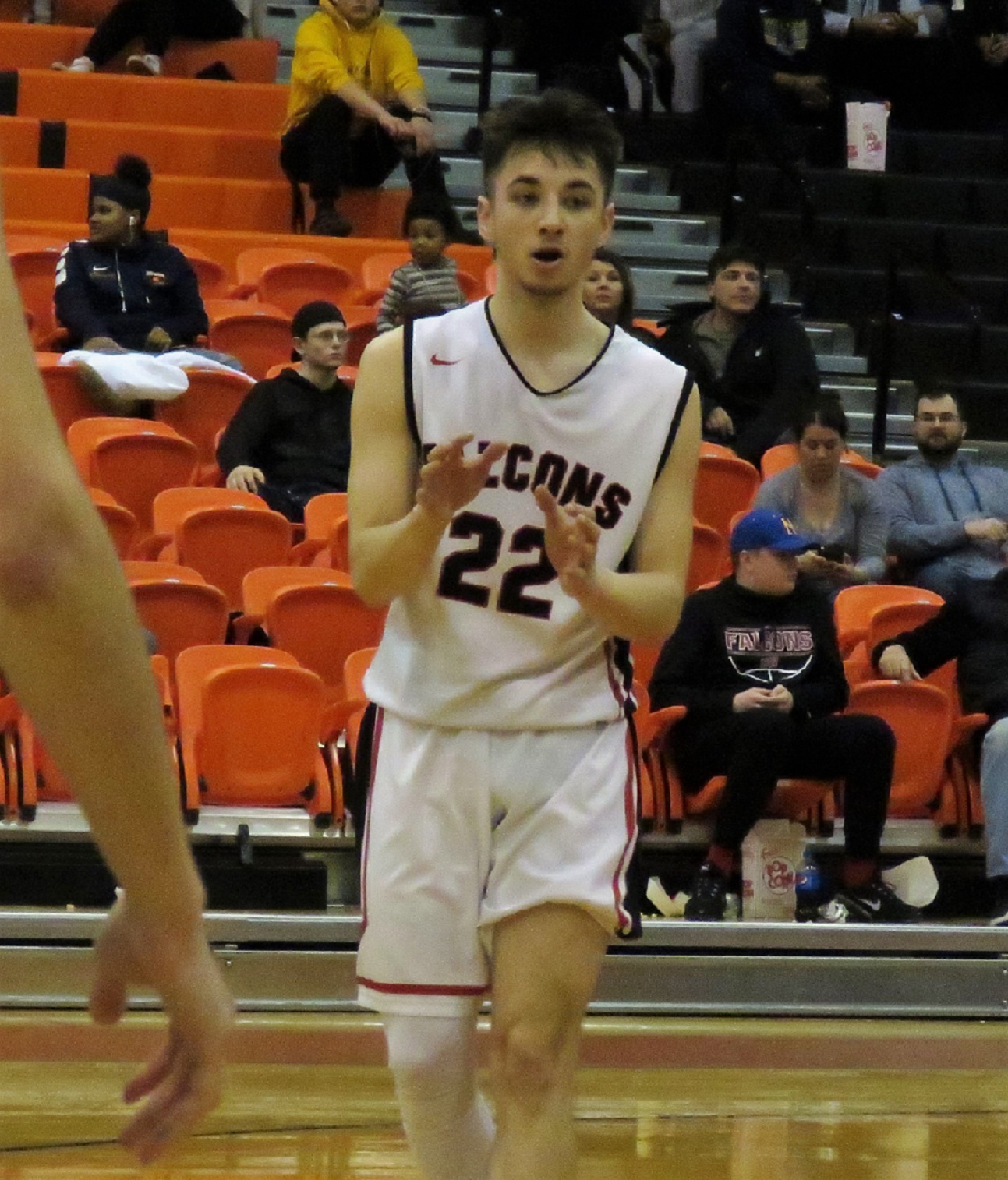 Roman Wright asks for a pass near the free throw line. 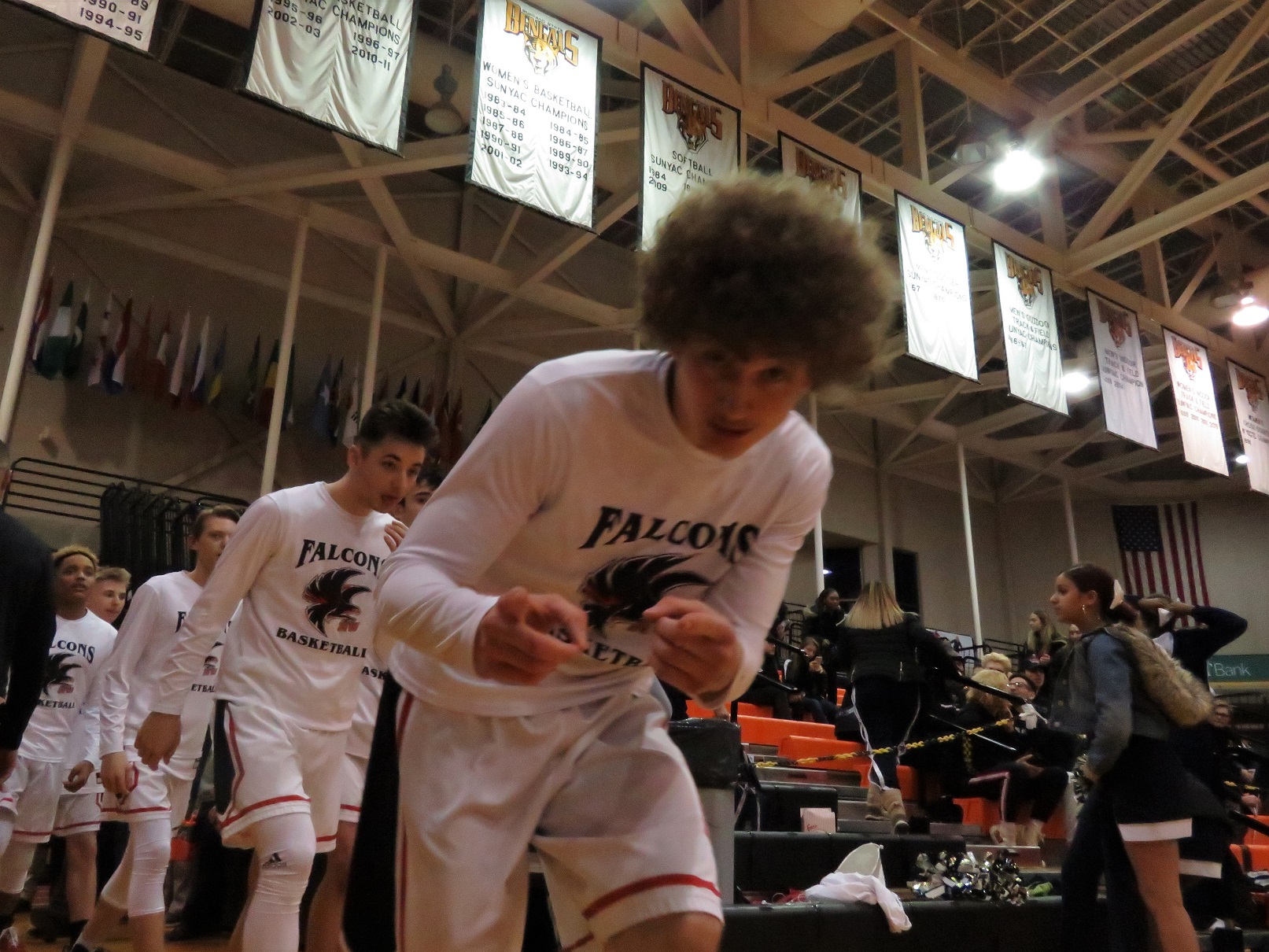 Zach Stanley poses for the camera as he heads to the court for warmups prior to the semifinals matchup. 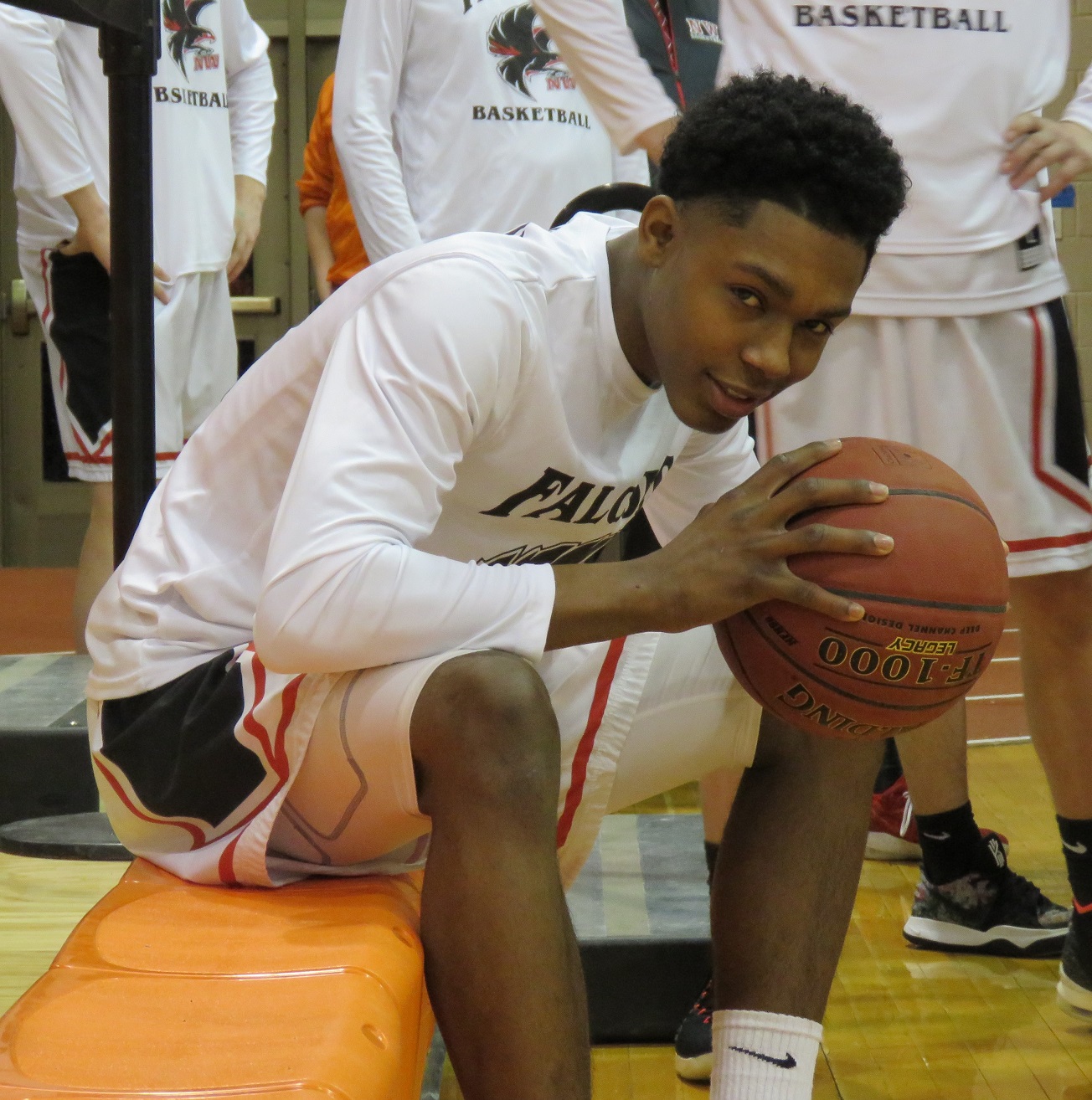 Raejaun Smith before warming up on Thursday. 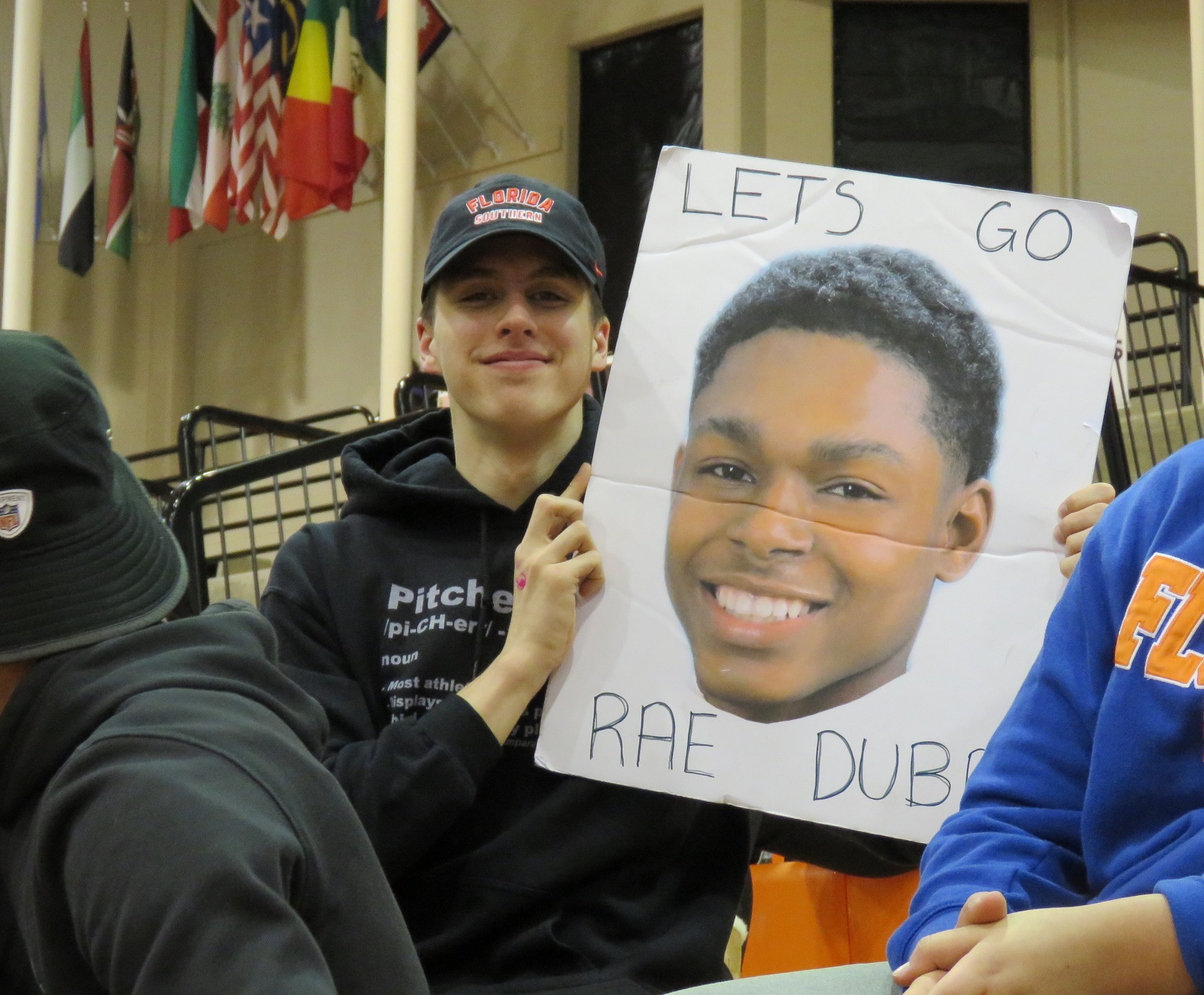 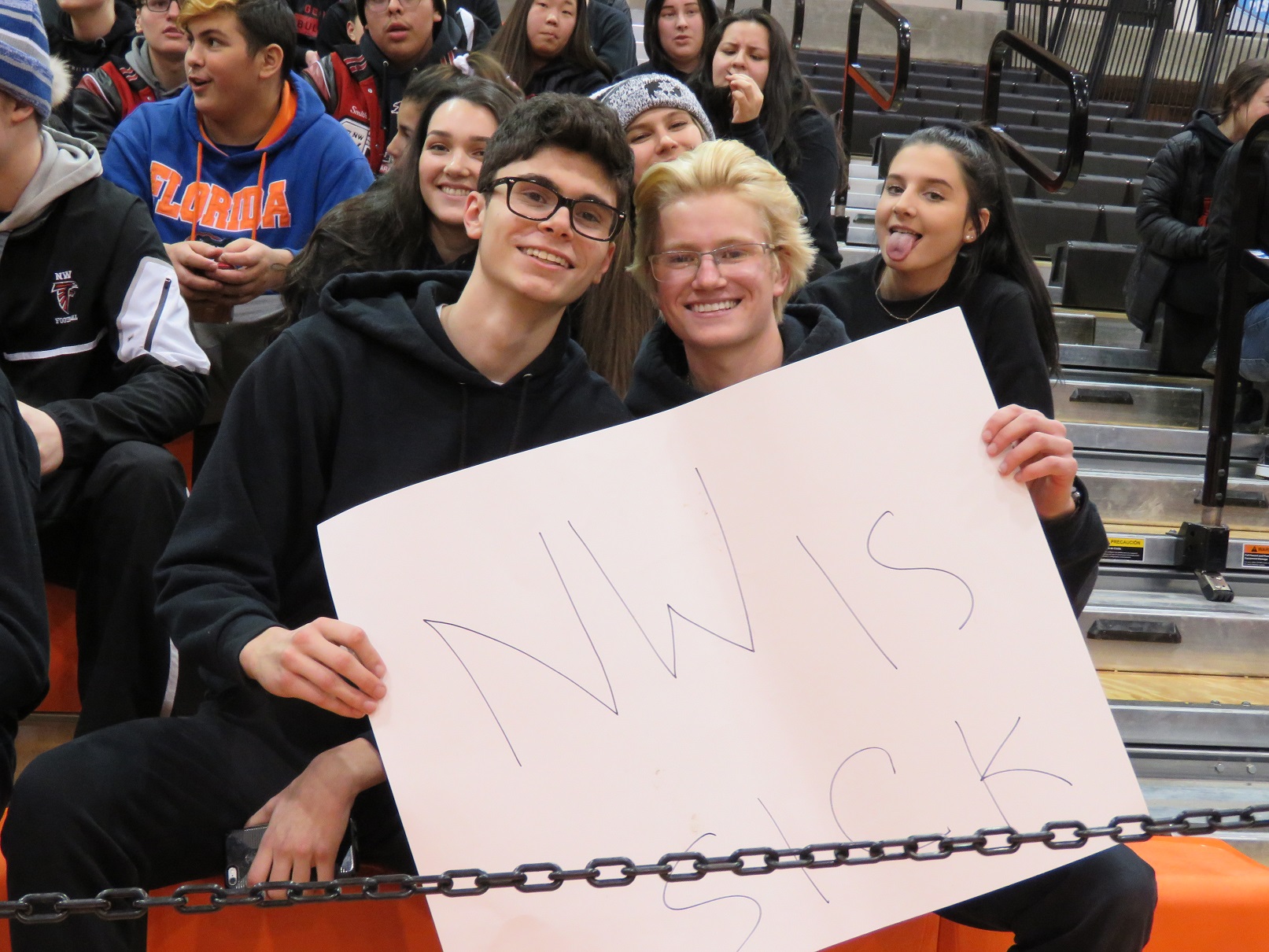 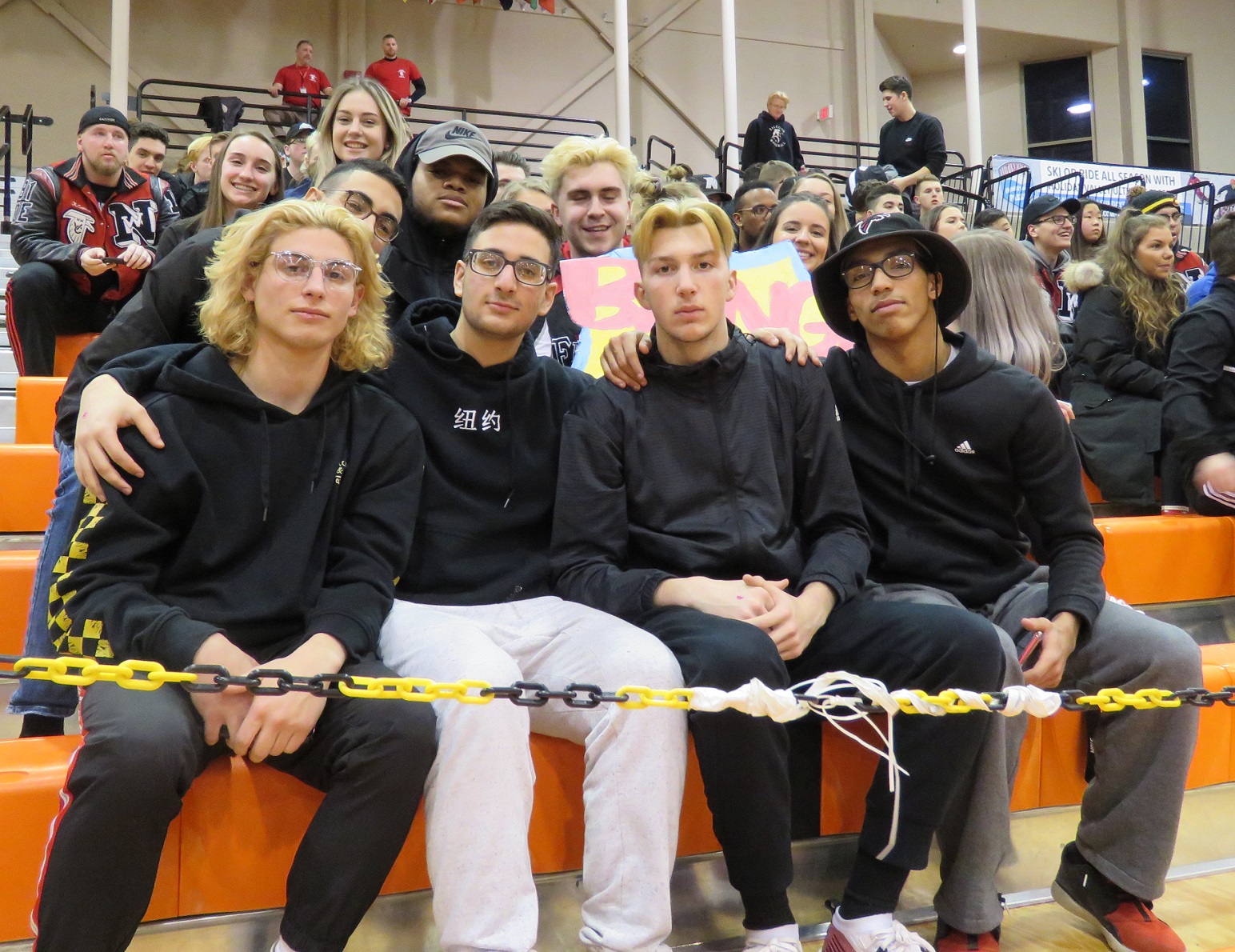 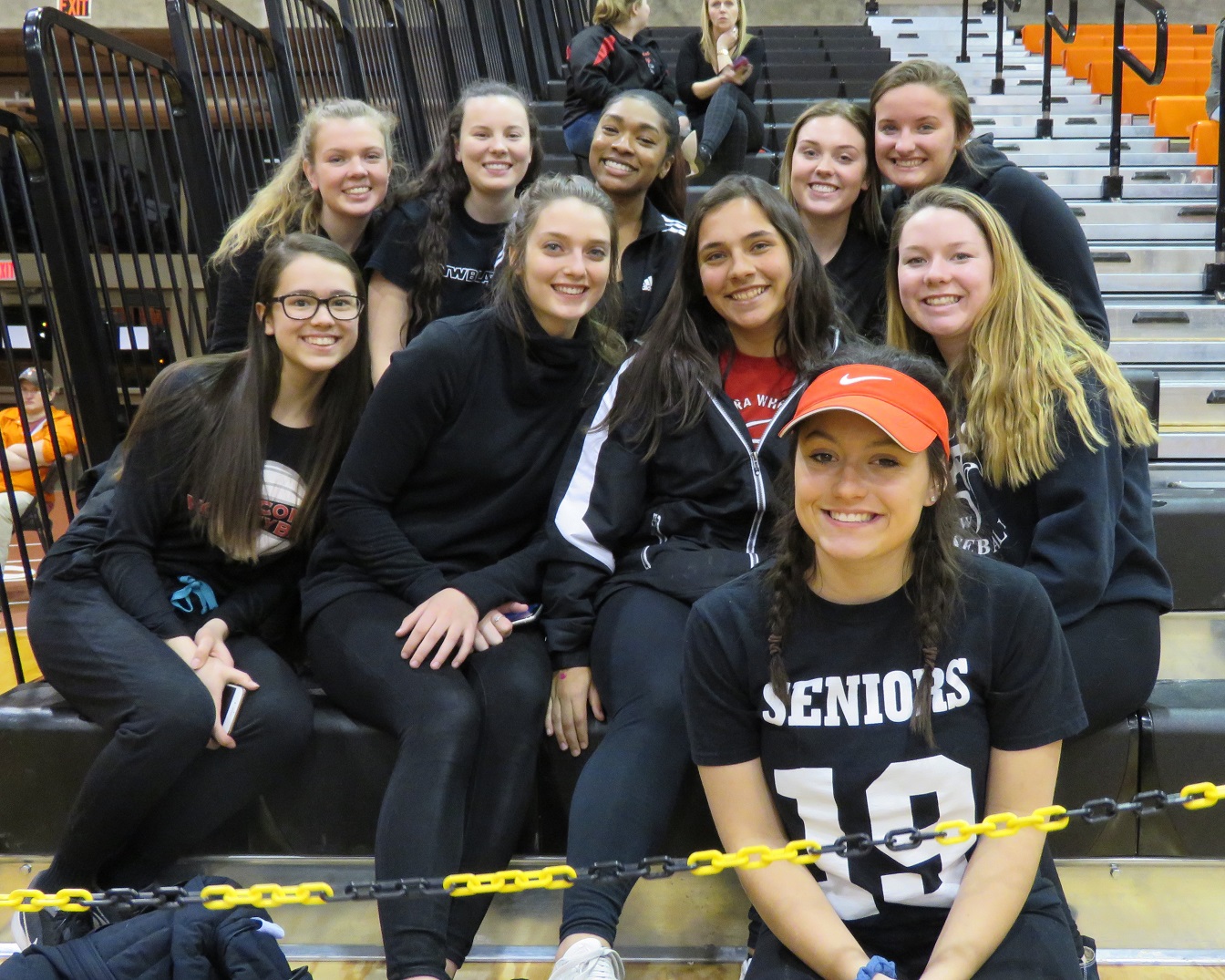 Despite the loss, the Falcons' fan section definitely showed up ready to cheer their team on.