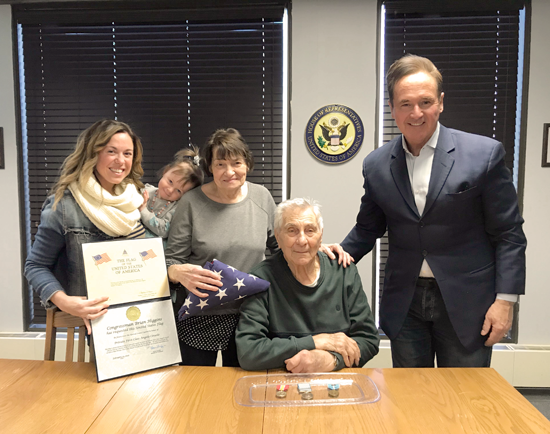 Congressman Brian Higgins is shown with Angelo Ciraolo and Lorraine Ciraolo, as well as the couple's granddaughter, Lorrina, and great granddaughter, Nalina.

Congressman Brian Higgins presented Korean War veteran Angelo Ciraolo, of Niagara Falls, with the medals he earned while serving in the U.S. Army 69 years ago.

Ciraolo was born in Grotte, Sicily, in 1928. At the age of 2, he and his mother, Diegia, came to the U.S., joining Ciraolo’s father, Philip, in search of a better life. Like many Italian immigrants, the family settled into the section of Niagara Falls later known as “Little Italy.” The family built a house on 18th Street and Ciraolo attended Niagara Falls High School.

After the Korean War broke out, on Dec. 12, 1950, Ciraolo joined the Army. Family members soon followed, with brothers Patsy and Vincent both providing dedicated service in the military, as well.

When Ciraolo left to fight in the Korean War, the last thing his mother said to him was, “You better come back!”

After basic training, he was assigned to the 21st Company Transportation Medium Port APO 59, a reserve outfit out of Cleveland, and he reached the rank of private first class.

Ciraolo was a movement control specialist in the transit accounting section of Port Operations in Inchon, South Korea. He kept track of everything that went into and out of ships in the port, including tanks, trucks, salt, coal and lumber.

Ciraolo also helped those who were wounded get the care they needed from hospital ships stationed near the shore. He assisted with the transport soldiers who were returning home from the warzone, and helped bring in reinforcement troops arriving to the battlefield.

As a movement control specialist, there was very little downtime. Ciraolo worked from 1 p.m. to 6 a.m. almost every day. He said he remembers enemy planes flying under the radar dropping hand grenades in the dark of night.

In 1952, Ciraolo was discharged from the Army and eventually returned home to Niagara Falls – fulfilling the promise he made to his mother to come home after the war. When he arrived at the train depot in Niagara Falls, a cab driver took him home and refused to take money, because Ciraolo was in the military.

When he arrived at his house, there was a welcome home sign, but nobody was home at the time, because his mother was at the market, his father was working, and his siblings were at school. Luckily, the door was open. Within a half an hour, they came home to greet him.

Ciraolo met the love of his life, Lorraine, who also grew up in Niagara Falls, at Beaver Island State Park. They were married on March 2, 1957, eventually raising five children in Niagara Falls. They have 10 grandchildren and a great-grandchild. Angelo and Lorraine currently live in the LaSalle area of Niagara Falls.

Like so many veterans, Ciraolo was reluctant to seek recognition, but wanted to receive a full set of his military decorations that he had never received. Not long ago, Ciraolo attended a “Congress on Your Corner” event in Niagara Falls. Higgins’ office reached out to the Army and requested the full set of the military medals that Ciraolo has been patiently waiting to receive for nearly 70 years.

On behalf of a grateful nation, Higgins personally presented Ciraolo with the following in recognition of service during the Korean War:

Korean Service Medal with three bronze service stars, awarded to any U.S. service member who performed duty in the Republic of Korea. The service stars are awarded for participation in the various campaigns.

United Nations Korea Medal, awarded to any military service member, of an Armed Force allied with South Korea, who participated in the defense of South Korea from North Korea during the Korean War.

And a flag flown over the U.S. Capitol in Ciraolo’s honor.

Over 33,000 Americans were killed during the Korean War, while more than 103,000 were wounded in action and 7,000-plus Americans remain missing in action. American forces fought alongside U.N. allies. They were outnumbered and faced harsh weather conditions and subzero temperatures throughout the war.

“While the Korean War is often known as ‘the forgotten war,’ we are committed to making sure that Angelo and other Korean War veterans know their service to this nation will never be forgotten,” Higgins said. 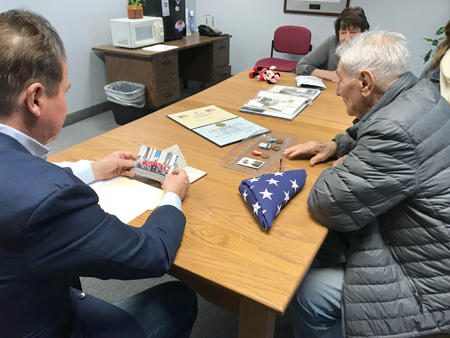